Meet Me At The Oasis

Ingredients for a thunderstorm:

So, I chased some weak convection out on the plains in January, but finally it looks as if the first *real* chase is upon us. The GooF has been consistent with a nice trough digging through the Rockies next weekend. The ECMWF is still a touch behind the GooF here, but it's getting closer to alignment. As of now, this certainly looks to be a chaseable situation and the if I had to commit based on today's information, I would be in. So, we'll be watching as the days click closer and the models hopefully align. Right now, NW Kansas looks great, but it seems that in the past couple of years, these early setups seem to head a bit south and a bit slower as the time gets closer. So it wouldn't surprise me if we end up a bit further south and a day later! But we'll see!

... it's time to dust out those cobwebs. Let the circus begin.

The GooF Giveth; The GooF Taketh Away

I was going to update tonight about the GFS (or the GooF as I like to call it) hinting at a nice setup on the Southern Plains come next Thursday. But... the ensuing 18Z and 0Z runs have destroyed what originally was there. So, with that, I'll share a photo of the cold winter that still embraces me here. 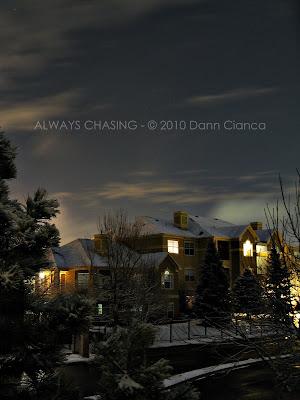 Serves me right for getting excited! Still watching that time-frame, though... so we'll see.
Posted by Dann Cianca at 11:48 PM 2 comments:

Email ThisBlogThis!Share to TwitterShare to FacebookShare to Pinterest
Labels: gfs 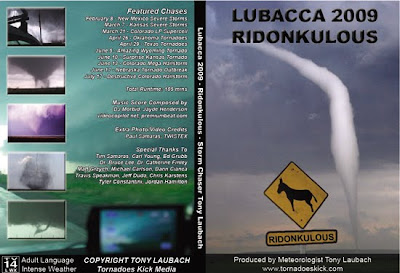 For the fifth year in a row, I attended the National Storm Chaser Convention here in Denver. This year would mark the 12th annual convention, organized by veteran storm chasers Tim Samaras and Roger Hill. The Chaser Convention has always provided a great opportunity to expand one's knowledge and network with other chasers.

This year, I figured since many other chasers would be in town, I would organize a Convergence! the night before the convention began. (Convergence! is a gathering of storm chasers, meteorologists, and other interested in weather that I started a bit over a year ago with the intention of bringing together several groups of my friends that all had 'weather' as a common denominator) Though there was a bit of a snafu with the location, I was happy to have thirty people in attendance and we all had a pretty good time.

The convention began on Friday night with an icebreaker which we made last well past the scheduled time at the hotel bar and a subsequent late night journey to Denny's.

Many of us woke up the next morning a little worse for wear but Jon Davie's opening talk was enough to put the pep in me. I always enjoy reading his write-ups of significant and sometimes surprising weather events and his talk seemed to carry that same edge. Tim Marshall followed and as always, his talk was great. I believe the man could sell a snake to a family of mice. Josh Wurman's talk was good as well, I caught most of it when he presented up at NCAR at an AMS meeting in the early fall. He did have some new information and imagery from the June 5th LaGrange Tornado which I had not seen and was very impressed with.

For lunch, I joined a large group that headed over to Northfield. We ate at a place called Jim 'N Nick's BBQ which was delicious. I spent most of the lunch listening to a couple savvy veterans talk shop. Sometimes it's just good to shut your mouth and listen. They had a lot of interesting things to say.

Back at the conference, the afternoon included talks by Steve Hodanish and Tim Samaras (who filled in for Mike Bettes from The Weather Channel since he was unable to make it), Dr. Howie Bluestein and Erik Rasmussen, all of which I enjoyed.

The banquet dinner was decent and Dr. Greg Forbes' keynote speech was as well and then we all enjoyed video night. There was an ample amount of hijinx throughout the day which marked it as one of the most fun in memory, but I'm not here to talk about that.

Unfortunately, I missed a couple of the Sunday morning talks, but did catch Greg Stumpf and Dr. Forbes again.

All in all, I would say that I enjoyed this convention more than any of the previous. The talks were all very insightful and the social aspects of the weekend definitely made for some fun memories.

I know this is kind of a cheap write-up of the conference, but I figure most everyone was there for the talks anyhow and if you weren't, you should attend next year! My main point was to say that I had a great time and I'm grateful for Tim and Roger's hard work that makes this convention a reality year after year. Next year I resolve to take more notes!