I had noticed Juanita Arch early on in my exploration of the maps of the area.  Located in Maverick Canyon, which feeds the Dolores River south of Gateway, Juanita Arch is a natural bridge which spans the canyon's wash.  Pictures of this bridge on the internet are largely unimpressive but I could tell this was a place that I really wanted to visit.

The most difficult hurdle related to reaching Juanita Arch is access.  While the arch is only a couple of miles up-canyon from its confluence of the river, there is no bridge nearby.  I surmised that it would be reached by old mining roads from the top, but there was no way of telling how good those roads are without going out and exploring them.

I passed by the mouth of Maverick Canyon while on a drive on Colorado 141 and thought it might be possible to ford the Dolores River on foot there.

So, I recruited my co-worker Shannon for a hike to the arch on this particular "Adventure" Monday.  We arrived by late morning before it became too hot.

As we approached the river on foot from a small pullout on the highway, I started having second thoughts about our ability to cross the river.  It was flowing fast and muddy thanks to runoff from its source, the San Juans.  The river was also a bit difficult thanks to think willow and tamarisk along its banks.  We found one little hollow we could climb through without getting too scratched up and found ourselves staring down the swift water.  Unfortunately, though seemingly shallow all the way across, beside the bank it was deep and muddy.  I sawed off a willow branch and did a depth test which was not promising.  I realized that even if we were to get into the water here, the crossing would be treacherous to say the least.  Suddenly, we found ourselves living out a bad Oregon Trail joke.  The decision was make to not ford the stream there and also to not get dysentery if that could be avoided.

We walked upstream a bit to where the water was deeper and moving.  I didn't like the looks of it.  Shannon suggested that we should just swim, which would be the only way to get across the river there.  I didn't think that was a good idea.

We then hiked back downstream below the first, shallow, fast-moving segment where we visited.  The water was moving fast here and it was relatively deep.  Shannon became adamant about swimming but I had a backpack full of gear that I did not want to get wet. All I could think was that this is how search & rescue stories usually begin.  If the water had been clear, I think I would have been a lot more interested in trying to swim, but it was the color of café au lait.  Who knew what kind of obstructions or snares lay beneath the surface? 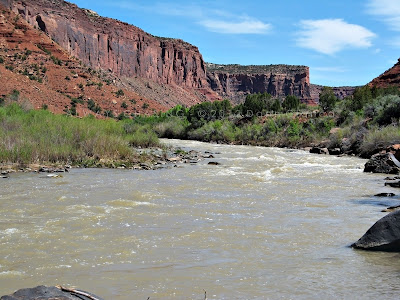 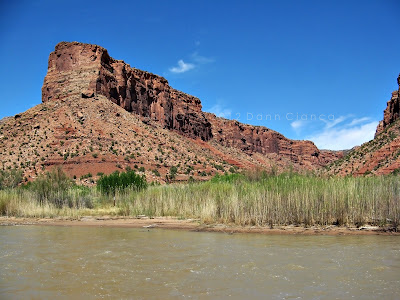 Directly across to the mouth of Maverick Canyon 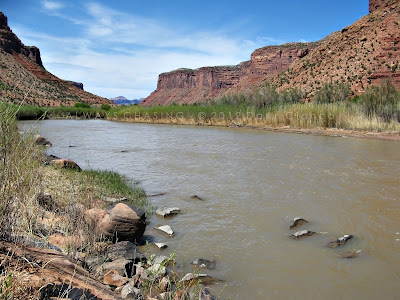 Before I could sort this all out, Shannon was in the water and waited only for me to hand over the one item I needed that I could get wet: sun screen.  After that was in her backpack (which only held a couple of bottles of water), she started to swim.  I was very concerned that she would get caught on something or get swept away, so I ditched my backpack (with my camera and everything else!) next to a rock and followed her in.

Half-way across, her feet were no longer touching and she was swimming diagonal to the current and making decent progress.  Soon, I found myself chest-deep in the cold water and before I knew it, I was also floating in the current.  While certainly not one to attempt a crossing of the English Channel, I can at least swim to some extent and was able to maneuver to a place where my paddling feet were striking the rocks on the bottom of the stream bed once again.  We lucked out in that there was nothing to catch us on the way across.

Walking ashore on the other side, I remarked that in my old age, my fears seem to become a little more intense.  For good reason?  I also lamented at the fact that my camera was residing in my backpack on the other side of the river.

We made our way across the delta at the mouth of Maverick Canyon where several campsites could be found.  The area is also apparently grazed from time to time as there were quite a few cow patties.

Eventually, we found the main wash and began to follow it upstream.  It felt strange not to be burdened by my heavy backpack and doubly so to hear the constant squish of my wet hiking boots on the rocks and sand.   Not even into the canyon yet, Shannon got into some cactus and we stopped for a few minutes while I helped her get the spikes out of the sole of her shoe while she related the tale of one of her roommates who had a far worse experience that required a hospital visit.

It was hot but not too hot as we continued upstream.  Our wet clothes aided in evaporative cooling for a while under the full, late April sun.  The stream bed became increasingly difficult as we continued; the canyon walls slowly narrowed in on each other.

Occasionally, we came across pools of stagnant water lined with chameleon-like canyon tree frogs which was bothered, only just a little.  Many areas were booby trapped by spiders which set Shannon off into several flailing fits.  She does not like spiders.

We came across a large slab of sandstone with paced indentations on it which I recognized as dinosaur footprints.  I had read mention of one such rock being in this canyon and we entertained ourselves there for a while.

Moving on, I started getting concerned that the described easy to moderate trail was much more strenuous and stuffed with obstacles than I had anticipated.  On several occasions, we had to put a lot of effort into bypassing piles of boulders or other obstructions.  There was supposed to be a trail but aside from the wash, there wasn't much of a path.

Another tough obstacle lay at the junction of Maverick and Little Maverick Canyons which again required some climbing.  Several more of these instances lay ahead as we continued, but we carried on.

The wash in Maverick Canyon effectively cut through the sandstone fin carved by an older meander of the stream, leaving the meander high and dry and creating a "natural bridge."  While the wash likely only flows during extreme runoff or flooding events, it is none-the-less impressive.

I forget my original estimates of its opening, but thinking back, I would put it at more than 100 feet wide and 80 feet high.  Here is a picture of the arch which I did not take... http://www.naturalarches.org/gallery-COjuanita.htm

We sat in the shade of the arch and had some water, enjoying the peace of this deep, desert canyon.  Nearby, we could hear bees buzzing loudly and we both took make-believe pictures of the arch, even simulating the shutter noise.

On the way back and still above the junction of the canyons, I stumbled across a cairn and a trail which led up and away from the stream bed.  Upon following it a little way, I realized that *this* was the trail that I had read about.  It remained above the wash and eventually climbed to quite a height, easily avoiding any of the jumbled piles of nonsense in the canyon below.

We stopped alongside one particularly flat wall of Wingate sandstone and joked that we should carve our own petroglyphs into the rock, describing our journey since there would be no photographic evidence.  We left the rock untouched and continued on.

The journey back was much easier and faster!  Soon, we found ourselves staring down the river once again and crossed a second time without trouble.  I took the only pictures of the day from the other side (the ones above are used to set the scene). 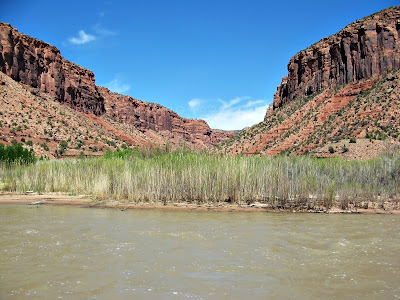 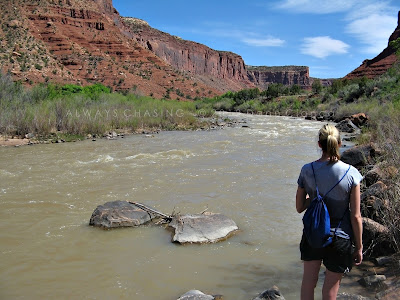 Luckily, I had a dry towel in my backpack (which no animal or human had carried off).  When we returned to the car, I changed into some flip-flops and put the towel on the seat of her car so I didn't get it messy.

We then headed on in to Gateway and enjoyed a late lunch/early dinner on the patio at the Paradox Grille at the Gateway Canyons Resort.  I had a delicious burger and like four glasses of Dr. Pepper.

It was a nice cap to an interesting day.

When I got home, I decided to make an image of the journey since I didn't really have any photos.  Don't worry, I used Photoshop.  No rocks were harmed in the making of this image. 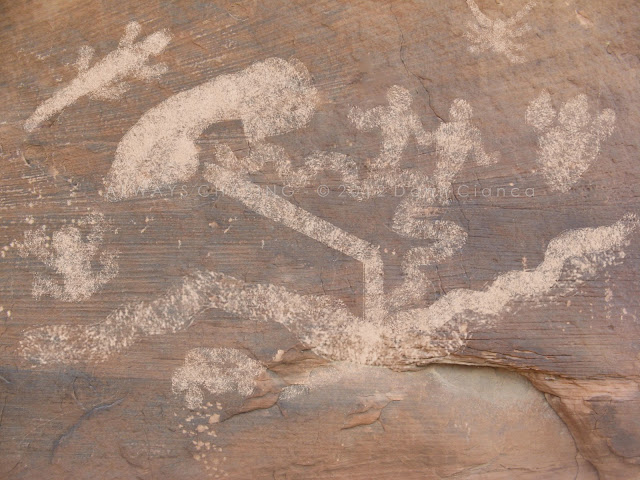 The Journey to Juanita Arch: Crossing the river, the "scenic route" to the arch and the more direct way back... complete with everything we saw along the way... 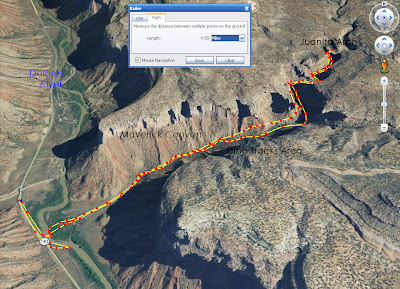 Dann.
Posted by Dann Cianca at 4:41 PM No comments:

Occasionally while working as a reporter, I would be able to head out to shoot a story and not be bounded by time.  This was one of those days.  I was shooting a story that would air on a later date and because of the distance required to travel.  On days like, this I occasionally stop on the roadside to snap a photo.  Below is a collection of those photos taken along Colorado Highway 141, also known as the Unaweep-Tabeguach Byway between Whitewater, Colorado and the Nucla/Naturita, Colorado area, which was my destination. 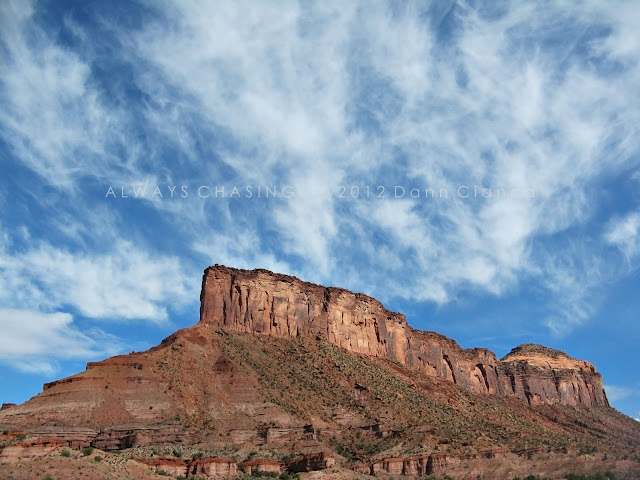 "The Palisade" towering over Gateway. 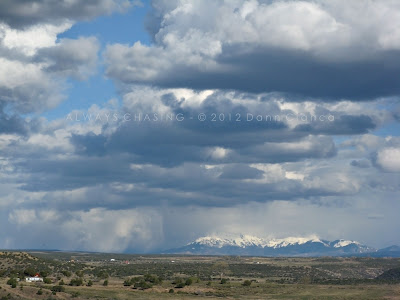 Afternoon convection across the San Miguel Basin toward the San Juan Mountains. 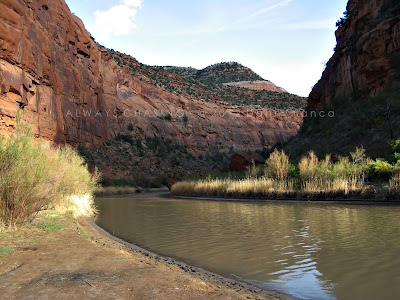 The Dolores River looking upstream from its confluence with the San Miguel. 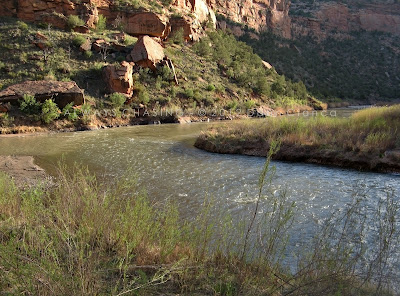 Confluence of the San Miguel River (foreground) with the Dolores (left to right). 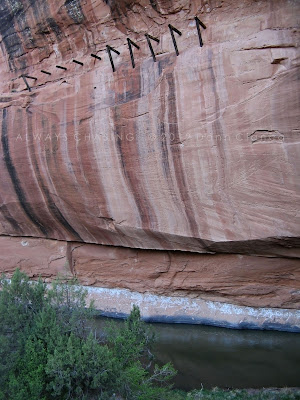 Remnants of the Hanging Flume along the San Miguel River. 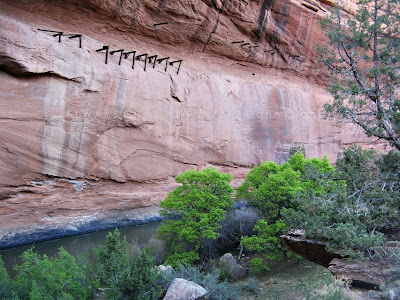 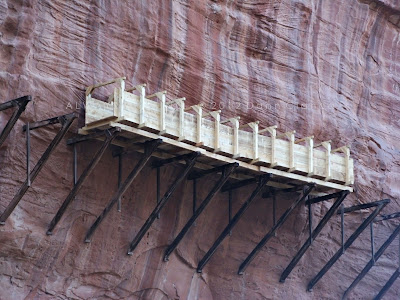 Check out my recent blog post on the Hanging Flume restoration: http://blog.bigskyconvection.com/2012/08/2012-april-13th-unaweep-tabeguache.html 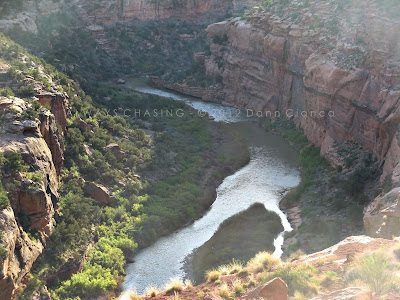 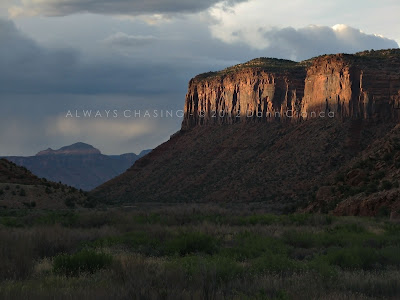 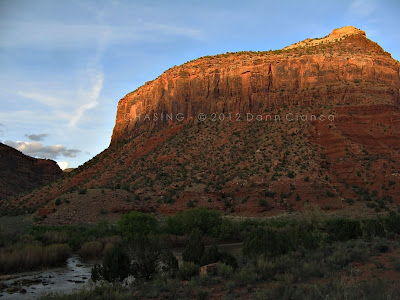 The gates of Maverick Canyon along the Dolores River.

And a few more shots from the Unaweep Canyon before the light faded... 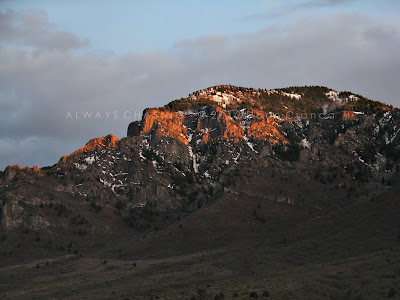 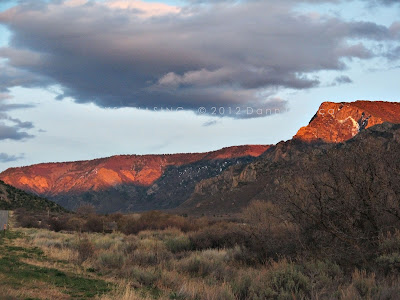 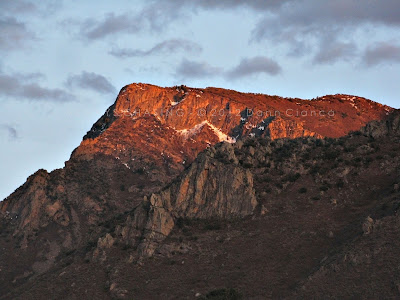 It's really hard to not see something beautiful in this country.  Always bring your camera!