On January 25th, I had finished all of my errands and chores and realized I could head out before sunset. Since I hadn't explored the other entrance to the Monument yet, I decided to head out with my camera.

I decided on purchasing the year pass for Colorado National Monument which is a steal at $20.

The road climbs rapidly along the edge of the cliffs and then turns into Fruita Canyon where it climbs slowly toward the end and then switches back on the opposite side, through two tunnels and back to the outside of the Monument. After a couple more switchbacks, the road levels out onto the top of the plateau near the Saddlehorn and visitor's center.

I decided to drive as far as I could, knowing that the road was closed somewhere ahead, and then take pictures on my way back. As it turns out, the road was closed at the Independence Monument overlook. To be honest, this sandstone monolith was more impressive than I had presumed.

I spent twenty minutes or so enjoying the view and taking a few pictures. Snow showers had been in the area that day and from the overlook, I could observe them along the Book Cliffs.

Here are a few shots out over Wedding Canyon and the view of Independence Monument. 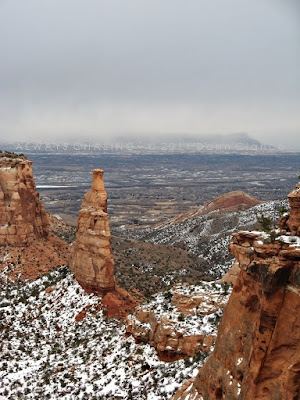 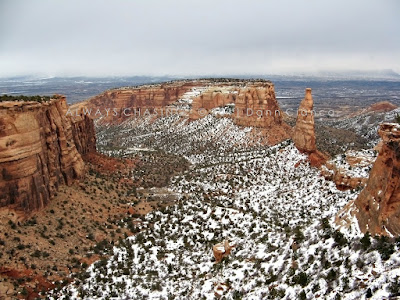 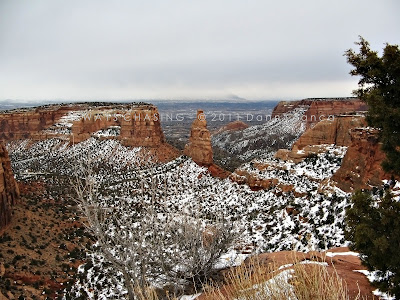 I returned to the visitor's center and drove around a little loop at the Saddlehorn. This afforded me a nice view of more monuments, including the Pipe Organ with Independence Monument behind it. 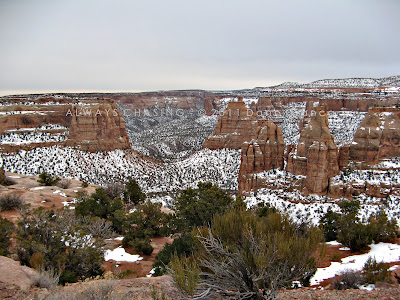 I had some elaborate cooking plans and needed to get home, so I headed back down the road, stopping only to take a picture of the last of the sun's light casting a red glow on the distant Book Cliffs. 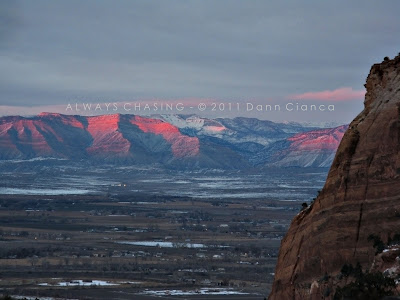 This was my first visit to the northwest side of the park, but certainly not my last!

Very nice
And all within sight of the other spots you've been so far.
Have you found or heard of any interesting local weather phenoms around there yet?

The weather around here hasn't been too interesting just yet. We've had a bit of snow a couple of times and some sleet once, but other than that, things have been fairly normal. We had thunder last week but nothing in the valley. Just a little lightning up on the mesa.