It was a cloudy day and I wasn't too excited about photographic opportunities, but I really wanted to get out and go for a hike, so I decided to explore a new area. Someone told me I should checkout the McInnis National Conservation Area trailheads along Horsethief Road southwest of Fruita.

The sun was already getting low in the sky as I arrived in the area and I drove to the end of the road which entered private land. Upon turning around, I stopped at the first available trailhead, intent on stretching my legs and exploring for an hour or so. I chose the Pollock Bench Trailhead and decided I wanted to stay low, along the drainage, instead of climbing up onto the bench. I stuck to the Flume Creek trail which occasionally crossed the weeping stream which was not flowing in all areas. Shortly after the trailhead, I crossed the boundary into the Black Ridge Canyons Wilderness.

The trail eventually climbs a bit away from the stream, but on a short bench, I looked the east and noticed that the stream had carved a tight chasm into the landscape. I walked down to the edge of the chasm which was deeper than it was wide and used a tree to help scale down the vertical wall.

There was a small amount of water flowing through this portion of the drainage and I followed the tight twists and turns of this slot canyon. Eventually, I came upon a scalable drop which was dripping into a sandy sieve. The creek bed above returned to a more comparable elevation to the surrounding terrain. 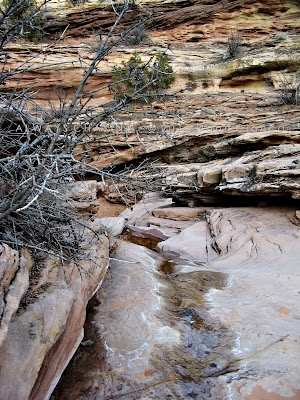 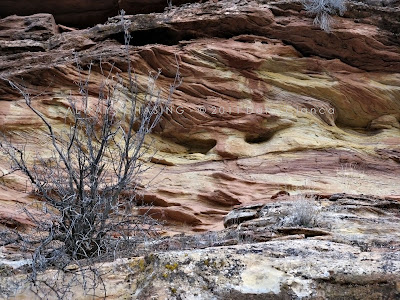 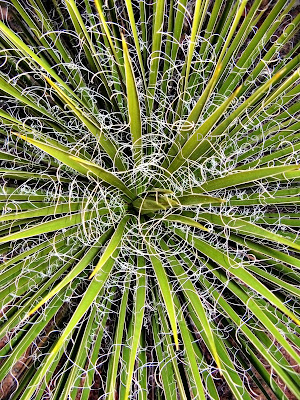 Yucca
I continued up the mostly dry wash from here, trying to make as much ground as I could given the clock ticking toward my turnaround time. Unfortunately, the terrain kept becoming more interesting with layered sandstone looking like offset pancakes forming the bottom of the stream bed, sometimes wet and sometimes not. 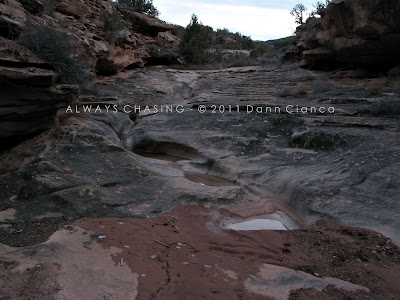 Eventually, I found myself in another slot canyon and treading into overtime as far as a turnaround was concerned. Realizing that I hadn't packed the flashlight that I had previously planned on including in my gear, I eventually turned around. I stopped to take a couple of photos of the tight, slot canyon while working on a bag of cajun trail mix. 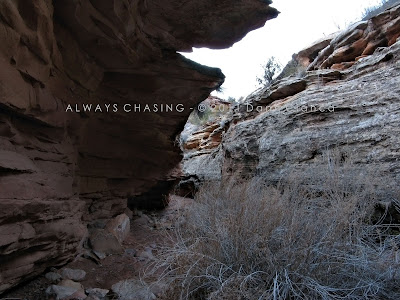 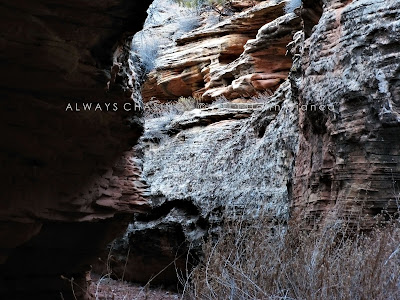 I rapidly worked my way back down the canyon as it was becoming difficult to see. I left the stream bed at the "falls" as the originally trail joined there. I was unsure as to whether the slot canyon farther down was passable. By the time I approached the trailhead, the waning light in combination with the cloudcover made it extremely difficult to see where I was going.

I did make it back to my vehicle without incident, however, promising myself to pack the flashlight in the future. It was good to get out and hike though the light left me unsatisfied.