My family first got the internet some time in 1996. We had the America Online service at the time and a 2400 baud modem. Before we upgraded to a faster modem, I recall actually having to turn "images" off such that a web page could eventually load. Back in the late 90's, I was a weather-obsessed high school student. One of the first outlets for my obsession was AOL's weather chat room. There was a regular set of people in there who talked about, as you could imagine, weather. After a while, I thought it might be a good idea to send out a weather-related newsletter. Thus, the LepWxNews was born. The "Lep" came from my AOL screen name "leporinis" (it's a type of fish). The first issue was sent out on May 29th, 1997 to just under 40 people that I had befriended in the chat. The purpose was to get people to report about the weather at their location which I then compiled and added to the newsletter.

Due to a hard drive failure many years back, I lost all digital copies of the newsletter which I put out for about two years. While I was at my parents' house during the holidays, I dug up a stack of newsletters that I had printed out. In fact, I found issues 1-116. I recently went back and started reading through some of the old newsletters and you can imagine my surprise when I uncovered the account of my very first storm chase! I really had to laugh while reading it, because some of it was completely made up. So, I am going to relay the account with historical inaccuracies and some grammar corrected and a few notes in parenthesis:

Saturday, May 31st 1997
A beautiful morning in the Mining City (Butte, Montana). At 6:30AM MDT, the temperature was 46ºF and the sky was completely clear except for the West. I checked the local Dopp (radar), and a small thunderstorm cell was moving northwest. This was the only cloud in the sky but it was far away. It exhibited an impressive anvil shape. As the day dragged on, the chance of showers and thunderstorms increased. Around noon, after a high of 72º, a squall line passed through bringing a gust of wind near 70mph (I have no idea if that is correct, I'm still looking for an archived METAR from that day) and some light rains. At about rhree, another thunderstorm hit. Two bolts of lightning, one nearly 20 seconds after the first, rocked my house. After some brief heavy rains with that storm, the rain has seemed to end.

Later that evening, about at ten (which seems weird, because my memory of the day has it still being quite light out), I noticed that the western sky was really starting to light up. I decided it was the perfect time for a chase. As I reached Rocker, a town about seven miles west of Butte, the lightning began to come close and the wind was howling. I pulled off at the Ramsay exit, about (8) miles west of Butte, and watched the lightning. Imagine, for a second, the fireworks on the Fourth of July. The lightning was hitting different spots on the ground just like fireworks. One bolt must've made contact with the ground on a hillside nearby for over five seconds. (this was true, there were many, many return strokes on this bolt) It was absolutely amazing. After the hail began, I decided to head home. The frequent lightning bolts along the side road reminded me that I should really watch. I pulled off at the Rocker exit and sat for another ten minutes. I had outrun the precipitation and the lightning was becoming more frequent if you could imagine that. As I sat there, without warning, a blinding light filled the car. I couldn't pick out the source of the light (but it was close). Let's just say, I was pumped. Then, knocking me out of my daze, the thunder violently rocked the car. Then, BOOM, a hailstone the size of a quarter smashed into the window. At this minute, I realized it was time to get the heck out of the there. The hail was just evil. I could barely see the road in front of me. I finally reached the on ramp to I-90. On the way home. I battled water rushing across the road and the heavy rain. (I can recall hydroplaning) But, thank God, I didn't see any more hail. Even Butte was getting socked, I had trouble driving up Montana Street because of the blinding rain.

I can't even remember if I was a trained spotter back then. Reading it really amuses me ... it's been so long. It reminds me of some of the new excited chasers that show up, the young ones. I've been pretty quick to judge and it's interesting for me to look back and realize I was just like them. 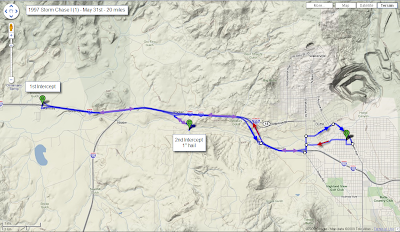 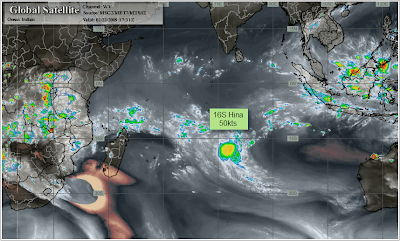 16S Hina - Unless you're on a boat, don't sweat this one. I don't expect it to gain much more strength before drifting south into the Southern Indian cyclone graveyard. 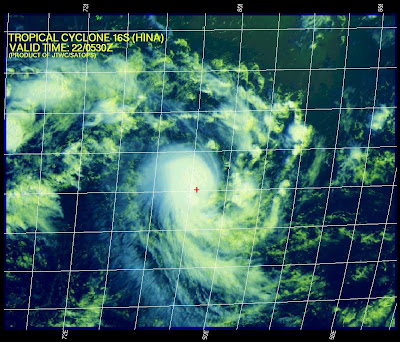 Overview tropical satellite imagery used with permission; courtesy of IPS Meteostar Inc. Tropical tracking information and additional satellite imagery from Joint Typhoon Warning Center and Navy/NRL Tropical Cyclone Page. Annotations are made by the author of this blog. Click for larger images.
**NOTE: If you've reached this page due to a search result, the most current tropical information can be found in the latest post and not necessarily the post you are reading. Visit http://blog.bigskyconvection.com/ for the most recent post.
Posted by Dann Cianca at 1:37 PM