It was another 5:00AM wakeup to meet at 6:00AM at the I-70/Peña Boulevard Park-and-Ride. I knew the day would be interesting after I was hassled by a rent-a-cop at the Park-and-Ride for "driving like a maniac" through the parking lot.

Synoptics: A deep upper level trough lurked along the West Coast with subtle shortwaves ejecting downstream. 50ºF+ Dewpoints returned to the Texas Panhandle where the dryline and a stalled out cold front-come-quasi-stationary boundary intersected. Our target was roughly the Amarillo, Texas area. Probabilities weren't all that high in the morning according to the Storm Prediction Center: (12Z Day1)... but, we were all eager to get out and I actually quite like chasing on days when the official forecast doesn't bring out the storm tourists.

Scott Hammel was driving and Ryan Kushner and Jason Burns joined us on this trek. We had a lot of fun on the way down, which included the obligatory stop in Eads, Colorado for a moment with the giant "Eads: Home Of The Eagles" sign. I was getting my picture taken while on one knee and made my best impression of an eagle call, which prompted a dove to frantically evacuate a tree right next to Scott's head, almost colliding. It was absolutely hilarious. Also en route to Amarillo, we encountered a pack of turkeys along the road.

We made it to Amarillo in the early afternoon as a little high-based convection was beginning to develop in Eastern New Mexico. We opted to stop at a Braum's on Amarillo Boulevard. I had heard a lot of good things about this place, but had never visited. This one, however, seemed a little dirty and a little ghetto, if you will. The man behind the counter was difficult to understand and had crumbs on his face. The cheeseburger left something to be desired and my chocolate malt was, well, crappy. I did enjoy the fries, however.

Will bellies full of food, we watched as a strong thunderstorm developed near Clovis, New Mexico. I was hell-bent on an intercept, though we would be leaving our target area, which was more to the southeast of Amarillo. Luckily, convection popped up due south of us, making the decision easier. We jumped on I-27 south and finally observed a tower going up through the mid-level clouds. From my forecast, shear profiles supported multi-cellular storms, but one of the first things I noticed was that there was a trend toward anti-cyclonic split cells. Surface winds were light from the southeast, slowly advecting moisture in while upper level winds slowly increased from the southwest. The mid levels were a little anemic.

We intercepted our first cell along I-27 near Happy, Texas as a mesoscale discussion was issued for our area and points south-southwestward. 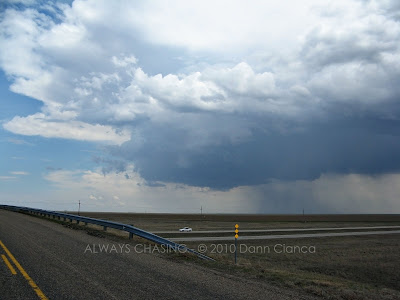 North of Happy, updraft on the north side of the storm. 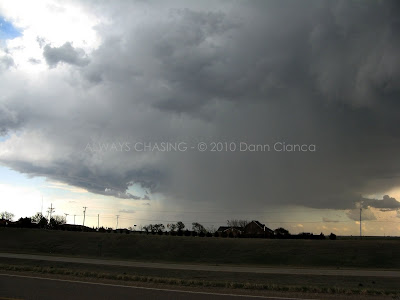 From Happy, Texas, looking east. Notice updraft on the north side (left) of the storm and additional updraft to the south (right). 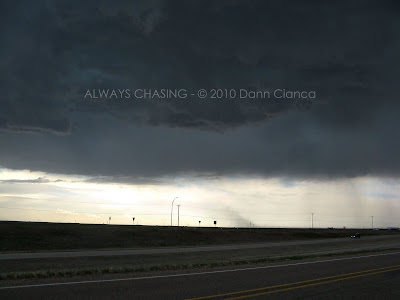 Dust in the inflow on the south side of the storm.

We continued a couple of miles south on I-27 to core the storm as it bowed north. We sat on a bridge over the highway where strong outflow created a nice slipstream effect on the top of the bridge. We decided to do a little minesweeping, so we continued briefly east to get into the deepest core where we encountered hail that was only about a half inch in diameter. We intended to follow the storm further north but the cake batter turned us around, so we traced our path back to I-27 and headed back to Happy where we could find a paved road east.

Here is the 0.5º Base Reflectivity from that time: 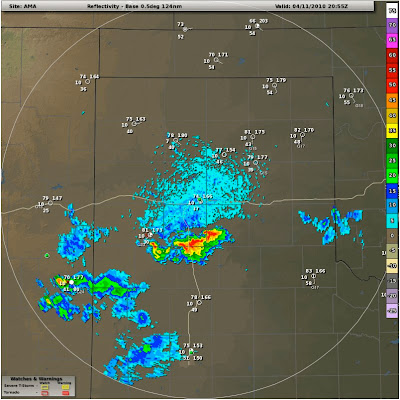 With the line of storms to our north, we continued east out of Happy to Texas 207 where we headed north and were awestruck by the grandeur of the Palo Duro Canyon. The storms were to our north, but we could still see the left-split base through the precipitation. There were some spits from the anvil and a bit of wind as we sat at the overlook, enjoying the view. 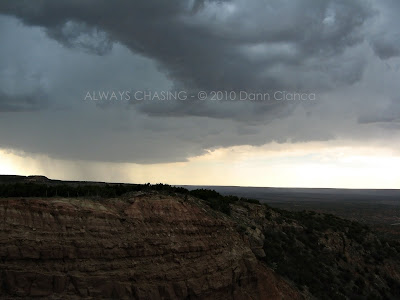 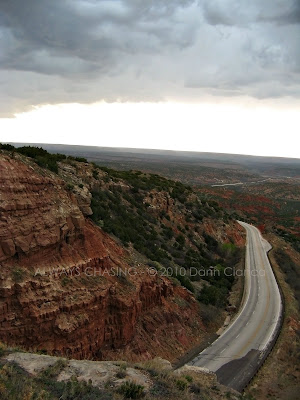 Unfortunately, we were dataless in and near the canyon and a desire to keep up with existing storms necessitated our transit of the canyon bottom, emerging on the north side, south of Claude. Looking above, the updraft was organizing on the southeast side of the convection, a sign that the line of storms had finally started tapping the rich southeasterly winds, laden with moisture. Before then, most of the storms had gone up west of the dryline which in reality wasn't very tight. We stopped for a while to photo and video the action. Still visible was the left-split updraft/quasi-mesoanticyclone which was just southeast of Amarillo at the time. 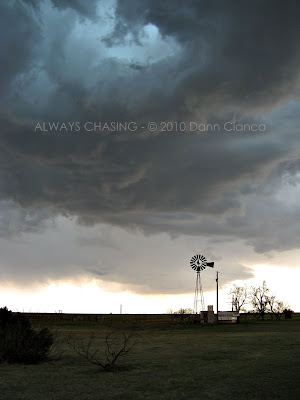 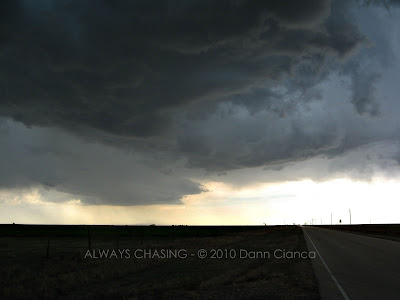 If you look closely, you can see dust rising into the updraft.

We advanced north to Claude where we refueled and within a few minutes, two of the cells in the cluster carried a warning polygon for quarter sized-hail and damaging winds in excess of 60mph. We decided not to drive north of US287 to intercept the left-mover, but to stay south, in the better air. We mineswept the core on 287 a couple of times and were only able to find 0.88" hail at the greatest. Here was the radar at about that time: 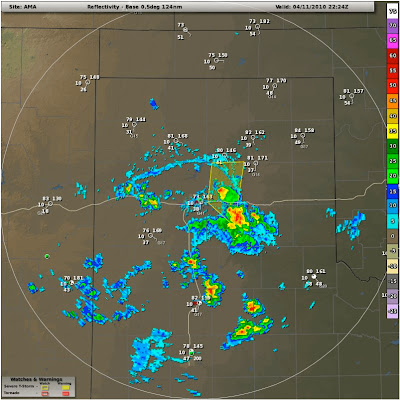 Doing a little mesoanalysis, it was obvious that the best CAPE, moisture, etc was still to the southeast, but we were also watching a line of cumulus that was going up east of Canadian. More convection was firing up south of the previous multi-cell cluster and was slowly moving off to the northeast, into a better environment. It was this that had most of my attention, so we headed south out of Clarendon on Texas 70, stopping a couple miles south for pictures. 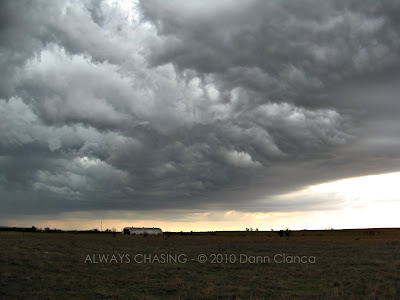 Looking to the northeast, turbulent undercloud structure as the cluster starts to bow out to the east. 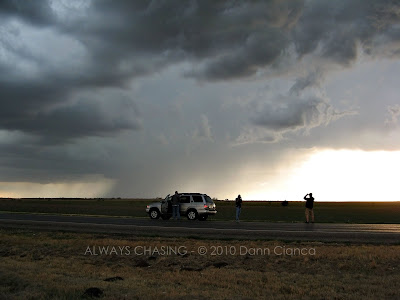 The gang taking in the view. It was astonishingly beautiful and at this point in the year, the best structure and lighting I had seen. 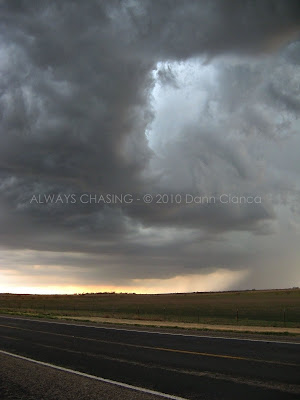 A nice view of the nearest cell, with a stronger cell lurking behind it.

Here is a view of the radar a few minutes later. We didn't know it at the time, but the stronger cell hiding to the south was becoming supercellular. 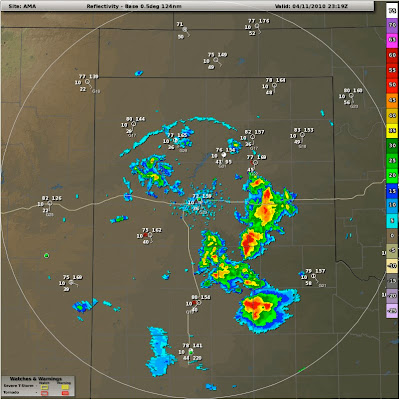 We continued south to the lip of Palo Duro again, where we took a short jaunt into the brush to capture an image of the forward flank of the new storm beginning to push out to the east. 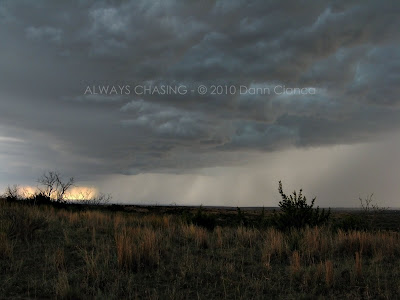 I believe that a bit of expected upper level support kicked in because the storms seemed to push out to the east, into the better environment. At the time, another mesoscale discussion (#0305) was issued. You can see the filling of reflectivity on this next radar image: 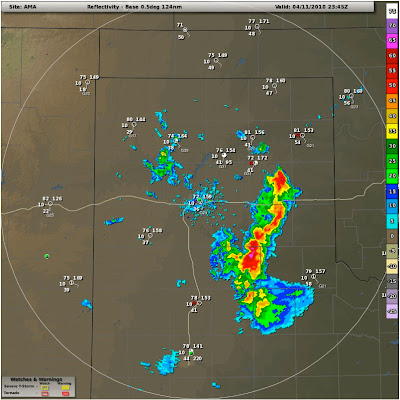 We continued south to the junction of Texas 70 and Texas 256 at South Brice. It was apparent to us at this time that something very interesting was happening to our southwest... something supercellular. So, we moved a bit east of the junction for a better view and were surprised at a beautiful mesocyclone which seemed to occasionally hint at lowering a bit. Here are a few shots of the beautiful, unexpected treat: 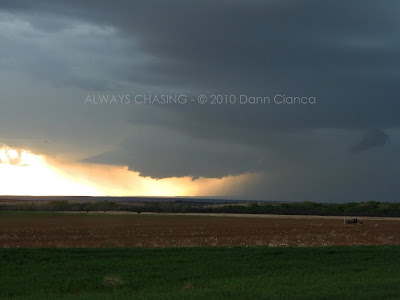 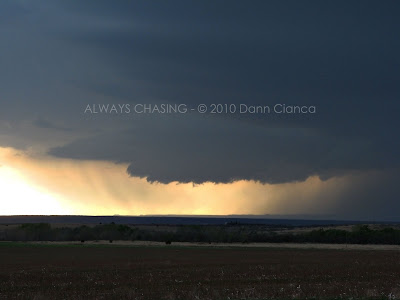 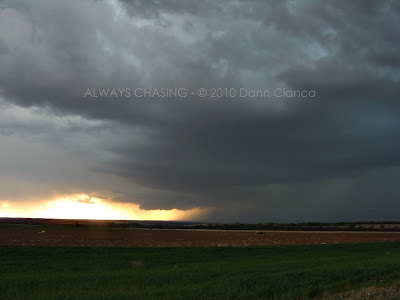 It was beautiful, but short-lived as the line began to gust out. 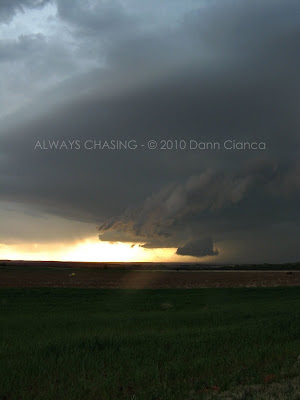 I realized at this point that we were unlikely to see anything more like we did, so the mission at this point became focused on low-light storm structure and lightning. We repositioned south of 256 on 657 and met a nice farmer who let us hang out on his road and photograph the incoming storm. 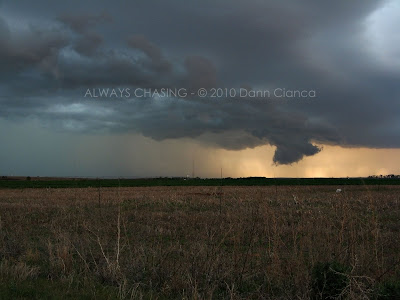 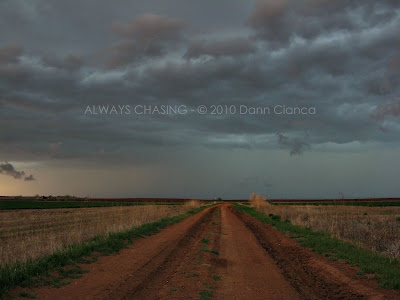 We headed south to 1041 and worked our way back north and east to Memphis as night fell. The rest of the images were taken at stops along the way. It was a little tough to photo as I had some stuff on my lens which I couldn't seem to clean off. I also battled a lot of rain on the lens and dust in my eyes as the wind was howling along the line. 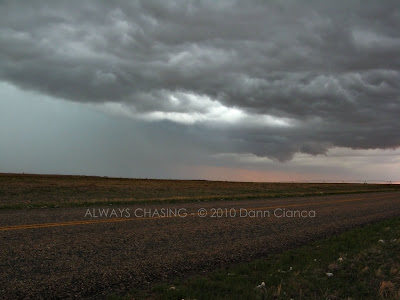 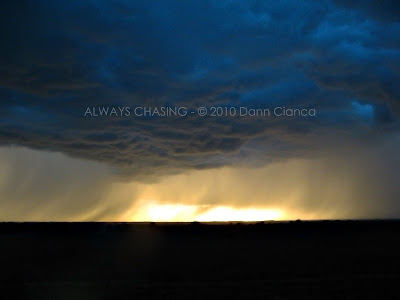 Amazing fading colors as the sun set behind the line. 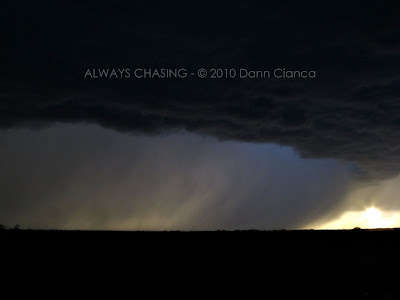 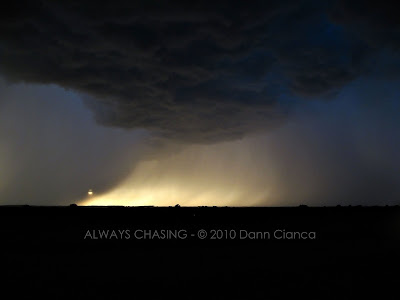 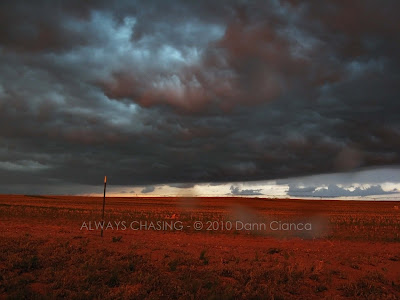 A beautiful red on the land to the east, lit by the setting sun and obscured by rain drops on the lens.

By Memphis, it was dark. Aside from having to navigate a pack of wild pigs, the trip was only windy and rainy as the line caught us. We gave up on the storms at this point and decided to make the trip back to Amarillo. We decided to stop at the Big Texan for dinner since none of us had been there. We couldn't have steak, obviously, since we didn't get a tornado, but all of us were satisfied with the results of the day. I found the countryside to be stunningly gorgeous and the storms only added to it. It was the best storm we had seen all year, though technically, most of the time the weather had remained subsevere.

Scott was a trooper on the long way back to Denver that night and made it just fine with an occasional stop for air and coffee. As is par for the course, there was a little fresh snow on the ground near Limon, though the roads were dry.

All in all, I think I speak for everyone in that this was a very successful and fulfilling chase.

Other chasers' reports on the date:
Scott Hammel
Jason Boggs 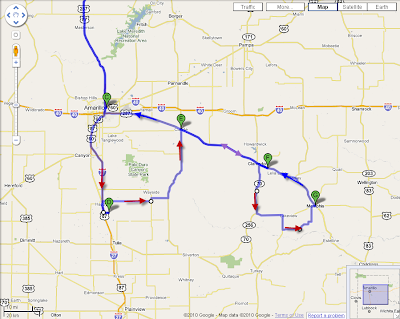 All other photos are copyright 2010 Dann Cianca and cannot be used without expressed permission.
Posted by Dann Cianca at 11:01 PM

Yuup, excellent write up. Had a blast that day and yeah Braums wasn't all it was cracked up to be. Glad your sunset photo's came out so good. One day I'll learn how to level a tripod...

That sounds like it was a fun trip!
Beautiful photos Dann, and a great read.

Thanks for all of your nice comments.

You know, Scott, you can always fix that in Photoshop!