Chased with Tony Laubach today along the Front Range of the Rockies in Colorado today. Our target was roughly the I-25 corridor between Colorado Springs and Pueblo. Our first storm intercept was actually west of there near Wetmore, Colorado. Storms were only pulsing at this point, so we decided to head to Pueblo. 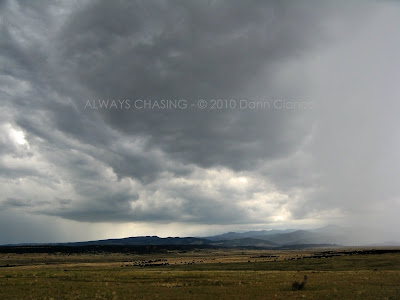 Thunderstorms over the Wet Mountains in Custer County, Colorado.

Back in data range, we found ourselves straddled between two severe-warned storms, both of which completely died immediately. So, we got a bite to eat at Jorge's Sombrero in Pueblo.

After dinner (and an extremely potent Margarita on my part), we headed up to the Springs to intercept a storm rolling out of the mountains. The storm was severe, tornado, and flash flood warned simultaneously but only really held a rain threat. We observed some flooding along Powers Boulevard and then eventually toured around a bit before heading home.

The day was a bit frustrating with storms dying as we approached all day, but we had good humor. I got to knock off a couple of mountain counties (Fremont & Custer) on my counties chased list. Also had great food. So, good day!

I live in Pueblo and was driving back from Denver on 83 and landed right at the Powers and Interquest area right about 6:15pm on July 20. I saw the looming dark finger clouds as I came out of black forest and knew better. As a hobby storm chaser I know what tornado producers look like, and that was it. I drove under it anyway although the fast rotating clouds were nearly touching the ground. One second I was watching them in fear and the next my vehicle was covered in a sheet of water, getting plummeted by hail and all I saw out my windows was dark grey. My suv felt like it was getting hit with a wall of wind. I managed to get into the parking lot of the New Life Church and park my vehicle next to a wall. I believe it was a brief tornado. I saw no reports of one, however I have been stupid before with the same result. I wonder if anyone else driving around me experienced this?

Thanks for your comment. We came into the Springs via I-25 and were behind the main precip core of the storm. While en route, we had a view of the updraft base, but not an extremely detailed one, so we didn't see anything that led us to believe the storm was tornadic. There was a tornado warning issued by the NWS which mystified us as we couldn't see much in the way of rotation on radar. Given the upper level winds on the day, it is unlikely a significantly rotating updraft would be present and thus a true supercellular tornado would also be that. However, like I said, we weren't on the updraft portion of the storm and stranger things have happened. If I had to guess, I would speculate that there was a nice finger of scud on the front side of the precip, considering the amount that fell, which would definitely cause a lot of outflow and scuddy structure. But like I said, we didn't see that side... you had a better view! I don't suppose you took any photos?