Chased several severe-warned cells in Eastern Colorado today. I met the first storm south of Deer Trail on I-70 and got readily cored. The largest hail was perhaps the size of a pea but the winds were the main story, easily gusting over 50kt and making it difficult to stay on the road (or even see) even at low speeds.

That storm sidetracked me from the convergence boundary that I planned on targeting, so I noticed that the cap broke on it and I drove irresponsibly all the way toward the newly warned cells, south of Yuma. They went from multi-cell to a high precipitation supercell, which I managed to avoid (stay in front of) for a good long while.

I left the storm after it rained itself out at Wray (which then subsequently restrengthened and was tornado-warned), but I had a distance limit on the day and had already reached it. Plus, by the time it was warned, I was already on my way home. 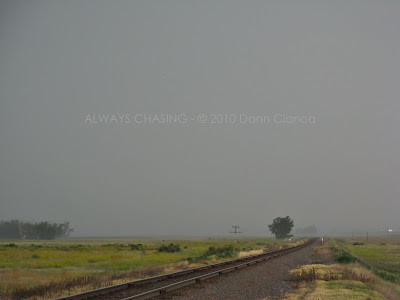 About to get cored at the Lowland exit on I-70 (south of Deer Trail). 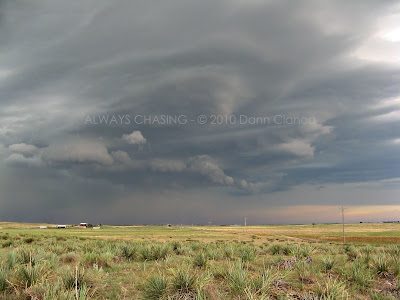 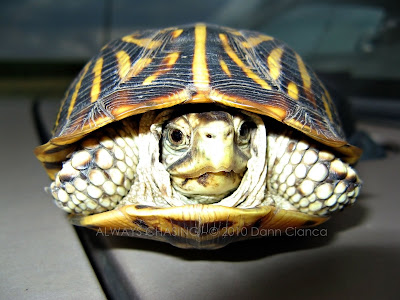 Briefly harrassed this little guy for a photo op and then removed him from the roadway. One of six turtles that I saw on the roads today and one of two that I stopped for and removed them from the road! 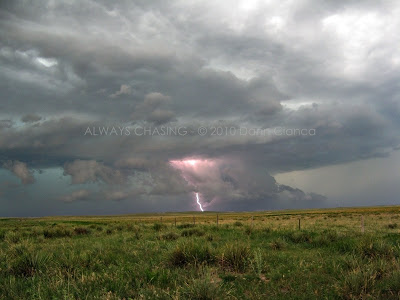 Just after 0Z, 6SE Yuma when the storm looked its strongest. Though the area was in outflow, there was a visible notch to the right (and looking at the radar later, a hefty couplet hiding back there!) Great motion too... wish I would have taken the time to set up the video camera. At the surface, motion was rapid right to left but just above, rapid left to right.

Today was a good chase in that I had very, very limited data. Had to give the iPhone back to the old job, so I was chasing with an old (non-smart) phone and basically a weather radio and paper maps. Thanks to Johnathan Skinner for some nowcast support as well!

The photos could have come out better... I was at that point of lower light where I tripod isn't necessarily needed, but would have been the smarter option. Though the lightning shot, I'll have you know, was strictly reflex. :)

what a great day!