The 4.0km WRF NMM Precip model showed convection moving over the metro area today and to be quite honest, it nailed it. I love that little model!

After taking Der Schploder to the shop for a tuneup today, I walked back to my apartment in a t-shirt and jeans. With temperatures in the mid 50s, it was comfortable out, if not warm. I was surprised to see the resident prairie dog population awake and out of their burrow. They are all quite fat! ...which I suppose is normal for this time of year.

As I walked, I noticed that the mountains were being hugged by snow showers, but at their edge, everything cleared up. In fact, the skies were clear from the southern horizon to the northern, aside from one tiny cumulus cloud which cast a brief shadow on me as I dodged the alarmed chirps of the prairie dogs.

When I arrived home, I took a closer look at things. According to SPC's Mesoanalysis Page, there was at least 100J/kg MUCAPE to the northwest. After seeing the WRF model, I decided to keep a close eye on things.

Associated with the upper level system bringing some crazy snow and wind to part of Idaho and Montana, lee-side cyclogenesis appeared to be happening across the eastern plains. Winds through the metro area were mostly of a westerly component which actually helped with warming today. DIA, for example, reached 60ºF (only 55ºF at my apartment in Centennial).

An hour or two later, I noticed a nice line of returns on the radar pulsing south toward the metro area. Though the view from my apartment is obstructed by the buildings across the street, I could see that the northern sky was now clouded while the south was still completely blue.

Taking another look at the radar, I could see that the returns were quickly approaching the radar site... and strengthening. I resolved to get my camera gear and head out the door. On my way out, I received a picture message from Ben Toms showing a nice shelf on the front side of this convective squall.

I realized I would have to go without my tripod as both of them were in the car (which was in the shop), so I wandered out of my apartment complex to get a better view. I really wasn't prepared to see what the storm had in store for me. When I finally got a view, the light was just perfect to make it look like a giant wave was crashing through the area. It was incomprehensible! 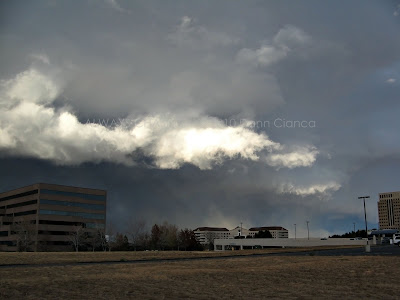 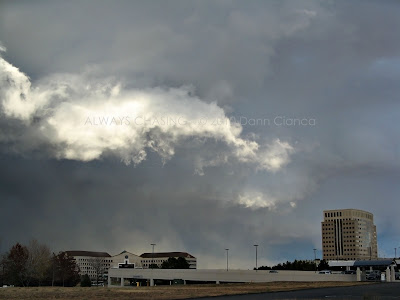 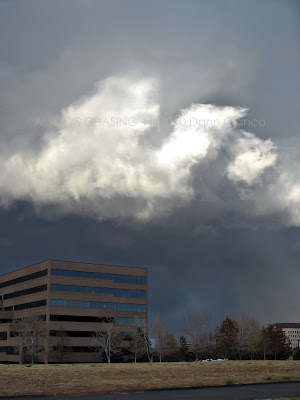 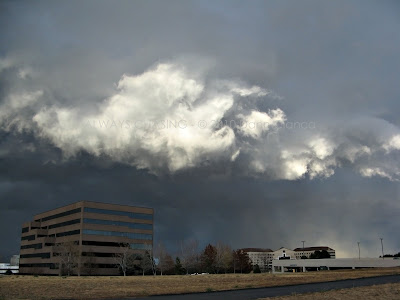 The turbulence along the front edge of this storm was amazing. I felt like I had jumped into a hot tub time machine and ended up in the spring. The lift on the front of this storm was so vigorous that it took me to a different season. Eventually and unfortunately, the brilliant light on the front side was blocked by "anvil" if you will, from the western edge of the storm heading through the mountains. I held my position on higher ground and watched as the storm kicked up dust (mainly to my east) and the shelf passed. 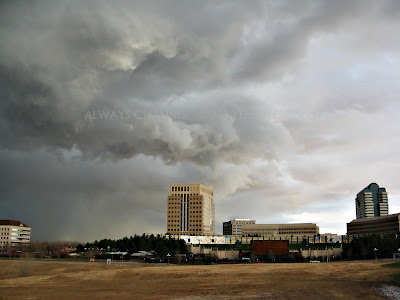 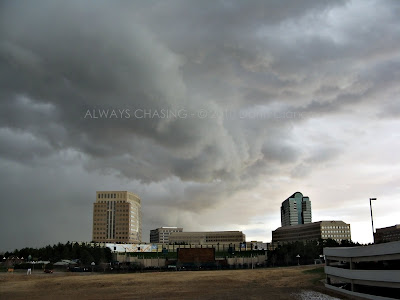 Here was the radar at about that time: 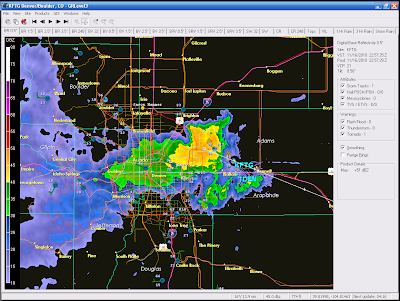 Surprisingly up until this point, I had evaded any the wrath of this storm. This silence was short-lived, however as soon I could hear the trees to my north basically bend over, the remaining leaves rattling like maracas. It didn't take long for this wind to hit me. It was like jumping into a cold lake. I was still standing there in my jeans and a t-shirt and the temperature immediately dropped 15ºF and was accompanied by 30kt winds. (I know this because I pulled my Kestrel out and took an ob!)

The wind cut me like a knife, so I eventually made my way south to an open lot just east of my apartment complex. There, the wind picked up dust readily and lofted it. Unfortunately, due to low-contrast, I couldn't really get a great photo of this. Let's just say that the prairie dogs were no longer topside at this point. 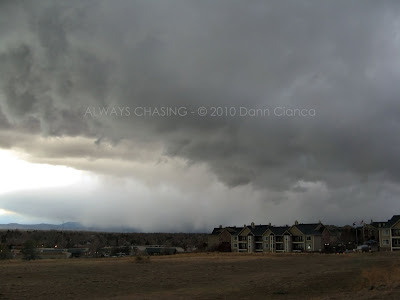 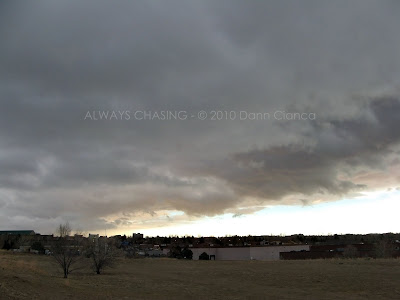 Eventually, rain with embedded bits of ice accompanied the biting wind, driving me back home. I usually like to front my climate tolerance as being extreme, citing my Montana nativity, but I'll be honest: I was freezing!

Back inside my apartment, it took a few minutes for my arms and hands to start working properly again. When I recovered, I looked outside to see a frenzy of dendrites flitting into the windows, the wind howling through my building. The flakes were quite large, perhaps two inches in diameter at the largest and the wind was blowing them around in such a manner that it evoked the feeling of staring into a snow globe... while it was being shaken.

This was short-lived, however, and after ten minutes the pavement was wet and grassy surfaces were white, but the precipitation had ceased.

What a wild storm it was while it lasted! Several of the local ASOS stations picked up winds at or near 45kt. As you can see in Johnathan Skinner's video HERE, there was quite the dust storm on the east end of the city. It's really a fantastic time-lapse.

A couple more waves of light snow and wind moved through the area before the end of the evening and while none of them left any significant accumulation, it was an interesting weather day for sure!

Nice write up and pics, Dann!