What fantastic weather we have had here in Denver for the past week! Temperatures cruised up into the 70s on a few occasions and it felt as if winter was never going to come. Those of us who spend most of our time watching the weather, however, knew that this warmth was short-lived.

Models had been consistent in bringing a deep trough into the west, which would break down the pleasant ridge we had been living under seemingly since summer. There didn't seem to be much question as to whether the precipitation would fall as snow or not. It definitely would be cold enough. So, today I watched as the cold front pushed through early this morning and set us up into deep upslope for the day. The radar began to pick up returns along the Front Range while it was still sunny across the Urban Corridor.

I started looking a little more closely at the RUC and saw a bit of instability as well, which made sense since lapse rates were decent. Sure enough, lightning began to show up in the mountains. Over the next couple of hours, the clear skies over the metro gave way to a rapidly moistening atmosphere. The radar returns began to reach over the Footies and then into the Urban Corridor. I decided to head outside with my camera to have a look. 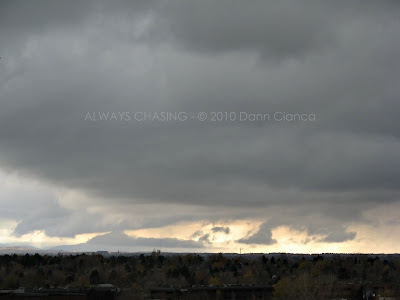 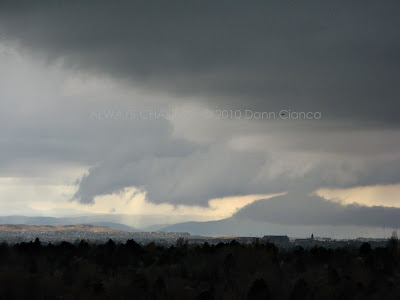 A bit of a shelf cloud forming on the outflow from snow showers moving out of the mountains. 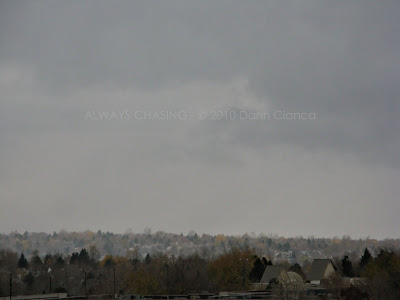 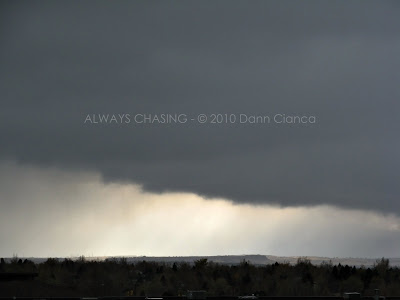 As the precipitation grew eastward, cold air began to descend out of the mountains, undercutting the upslope. While I was standing there taking photos, I endured a few spits of light rain but this was soon replaced with sleet. The sleet surprised me. I had predicted graupel with the available instability, but not the sleet. I had to think for a bit to figure out how it happened and as far as I could tell, it was just the undercutting of the upslope flow by the cold pool. That allowed the rain to fall through the subfreezing air close to the ground and become an ice pellet. Soon, the pellets falling changed from clear, frozen rain drops to white, accreted snow pellets or graupel. I kind of love graupel. In fact, way back when in high school, I wrote an article for the local newspaper in Butte, Montana about the difference between graupel and hail since I was tired of people telling me that they had been hailed on during a convective snow shower. If you're curious about the processes, I'll explain it briefly here. Graupel is formed in the same manner as a hailstone with the main difference being that for graupel, the entire depth of the convective cloud is below freezing. The snow pellet is formed by accretion of ice crystals as it travels up and down in the storm's updraft. For hail, the freezing layer is usually higher up in the cloud and thus the "stone" when traveling up and down in the updraft spends some time accumulating water and then having it freeze when it is higher.

Anyway, I figured we would see some graupel and we most certainly did! I was hoping for some larger pellets, but most were fairly small. 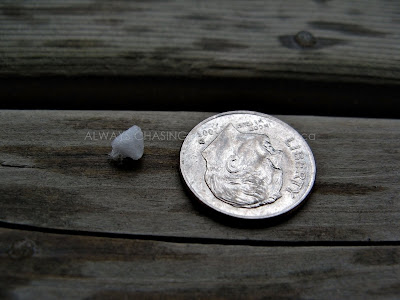 Back at my apartment, the graupel actually changed back into rain for a while before snow slowly started mixing in. Over the next hour or so, it actually started snowing large dendrites for maybe a half hour. Most of these melted, but eventually the snow began to accumulate on grassy surfaces. I figured it was high time to fire up the fireplace and make some hot cocoa! All weather should be enjoyed... 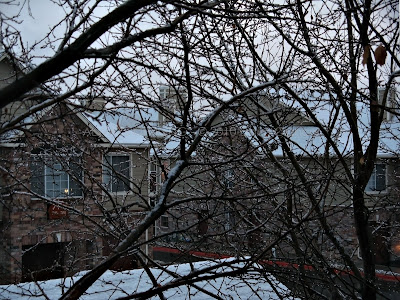 I was content to spend the rest of the evening indoors, but I caught a glimpse of color outside of my window and noticed that the sunset might be peeking through. I put on my warm clothes and got my camera again, making my way back out to the empty lot east of my apartment complex. Unfortunately, the small hole in the stratus that let the sunset through had closed up, but I figured since I was out, I might as well make the best of it. So, for the next hour, I walked around the Greenwood Plaza area and took pictures, occasionally being startled by a flash of light or two in the sky. Interestingly, the precipitation was almost over, but I kept seeing flashes. 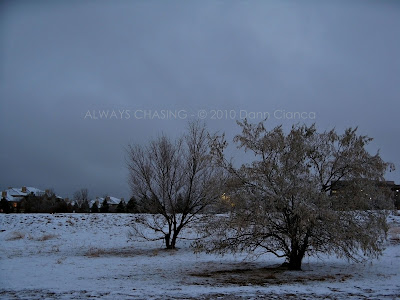 Russian Olive after the snow. 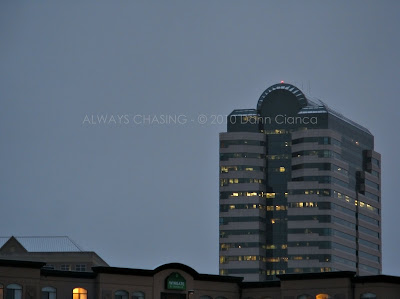 Snow on the top of Plaza Tower One. 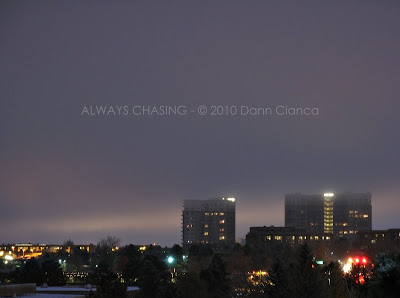 City lights of Denver reflecting off of the stratus deck with the Landmark towers almost hitting their heads on the ceiling. 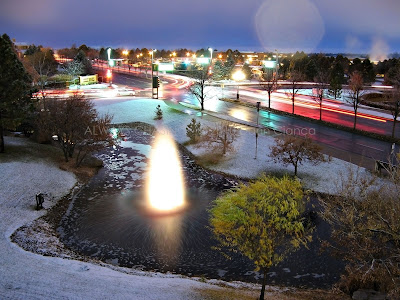 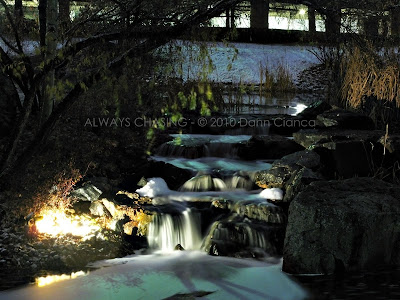 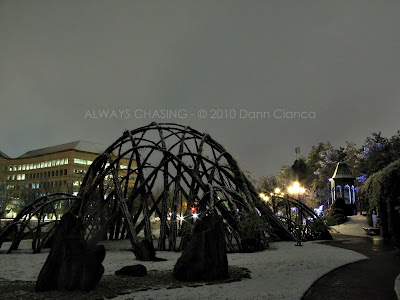 Another trip through the Museum of Outdoor Art. 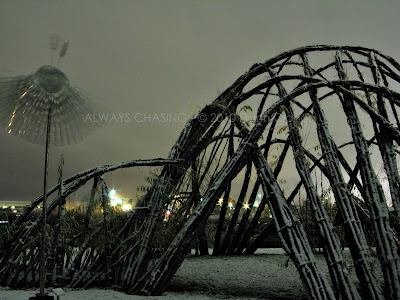 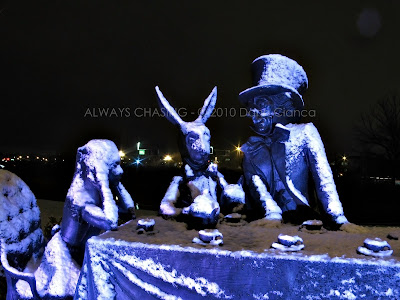 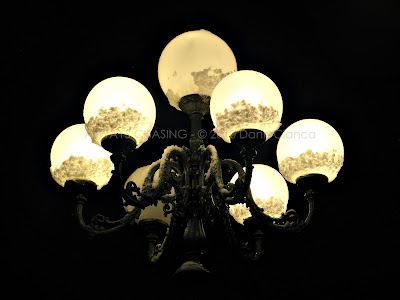 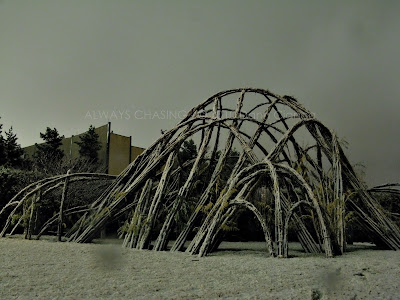 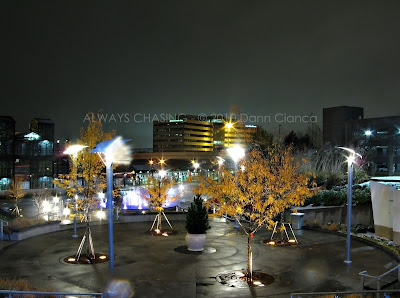 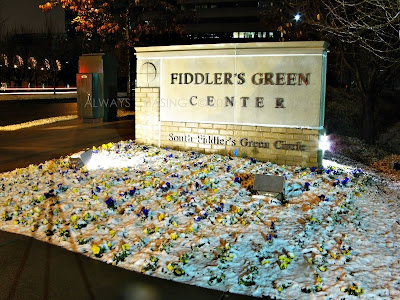 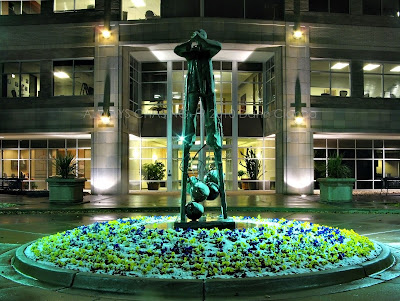 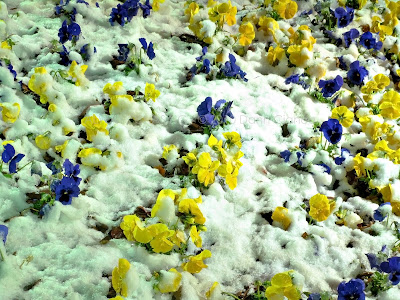 It was actually a beautiful evening to go out for a bit of a walk. It wasn't too cold and just nice to be "experiencing" the first snow of the year. Even at home later in the evening, I would occasionally see a flash in the sky outside. I still find this strange as most of the precipitation had moved well off to the east, but I am unable to explain it otherwise.

These pictures are amazing Dann. I kinda want to frame them and hang them up in my living room.

Thanks April! Let me know if you want a full-res, non-watermarked version of any of them.

Amazing shots Dann. I need to get out of the Illinois, and into the Colorado ASAP.

Thanks AP! I'm kind of hoping I end up in the Illinois. Lol. Are you really planning to move out here?