Bright Banding: Did It Really Rain That Much?

Did it really rain that much?

If you were up late last night, you may have noticed that a weak disturbance moved through the area, lifting up a few showers. I had the brief inclination to head out and hope for some lightning, but the lapse rates weren't really good enough to afford any worthy instability.

I did go over the radar this morning to see how the event played out and was briefly surprised by how "heavy" the echoes were. I suspected that there was some bright banding going on so I decided to investigate a bit further.

Take a look at the Digital Storm (Total) Precipitation image from KPUX (the Pueblo radar) through this morning: 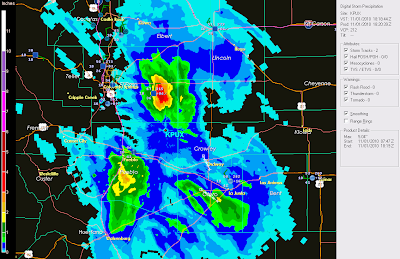 In the image, it appears that portions of El Paso County received as much as four inches of rain! Luckily, very close to that precipitation maximum exists KABH (Ellicot-B AFA). According to the observations from this station, only 0.25" of precipitation was recorded, much less than the radar's estimate of 1.5-2". I also checked several other stations in the area that existed within the areas noted by radar estimates and all reported precipitation significantly less in magnitude than the radar estimate.

What is bright banding?

Let's start with the radar. What we see on radar (reflectivity in this case) is a product of energy being sent by the radar, bouncing off of a target (rain drop, hail stone, snowflake, bird, etc) and returning the radar. The radar reacts differently to these different types of targets. For example, snow or ice absorbs more of the radar energy than a rain drop, thus the reflectivity is smaller or less intense. The Digital Storm Total Precipitation above only really works with pure rain target as it had an algorithm to "add up" the reflectivity over a period of time.

So, if the ground stations only recorded small amounts or rain and snow would have looked "less intense" on radar, what would lead to the radar reflectivity being so high? The trick comes in the transition from snow to rain. Though the ice reflects less energy, when it begins to melt, the liquid water reflects much better. Think about the largest snowflake that you have seen... now think about the largest rain drop. When you have a large snowflake that is beginning to melt, it can look like a HUGE rain drop on radar and thus the reflectivity becomes much more intense.

On days when snow is changing over to rain before hitting the ground, it can seem like the precipitation around is much more heavy than it really is. The "bright banding" term actually comes from the presentation on radar. This is more obvious over flat areas on days when you have a large area of stratoform precipitation. Since the radar is aimed slightly above the horizon, it cuts up through the atmosphere, higher as it moves away from the radar site. As it passes through the layer of the atmosphere where the snow is melting into rain, it can look like a "bright" (referring to the reflectivity) band on radar. Sometimes, it looks like a bright doughnut of symmetric color around the radar site.

Check out this example:

So no, it didn't really rain that much. The atmosphere just tricked the radar into thinking it did. Kind of cool, huh?