The greatest thing about the hike to The Devil's Kitchen at Colorado National Monument is that it is short. Okay, so this is only great if you're looking for a short hike, but since I had planned two hikes on this particular day, it did me just fine.

With my new annual pass to the Monument in hand, I set out on an absolutely gorgeous morning. The only clouds in the sky were low, distant and to the north. The Devil's Kitchen shares a trail head with the Old Gordon, Echo Canyon, No Thoroughfare and Serpents Trails, though the parking lot is quite small. I was lucky to find a spot since it was early and still winter, so I set out.

The trail crosses the dry wash at the bottom of No Thoroughfare Canyon and then follows a branch of that wash into an unnamed canyon. The trail then ascends the north wall of that canyon and the rock formation known as the Devil's Kitchen is easily visible. The ascent is short but the trail seems to disappear into a million forks. I found myself climbing up, still and away from the formation itself, along the wall and deeper into the canyon. There are places where a layer of sandstone acts as a shelf which acts as a natural barrier of sorts. Eventually, I found a way up and found myself on a broad, flat area between the broken ridge between canyons and the isolated and prominent formation at the branch. This afforded me a great view into No Thoroughfare Canyon. 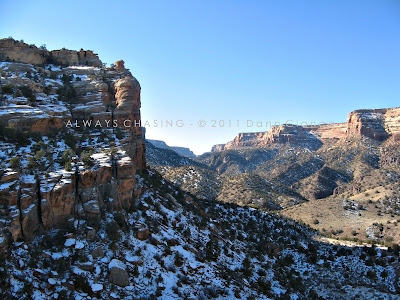 I like to keep my photos in chronological order, so look a bit below to get a picture of what The Devil's Kitchen looks like from afar. I approached the formation and climbed inside, exploring its interior and peeking out its windows. I took a lot of photos here, so instead of sharing them all (there are a lot), I've chosen a few unique impressions of the area. 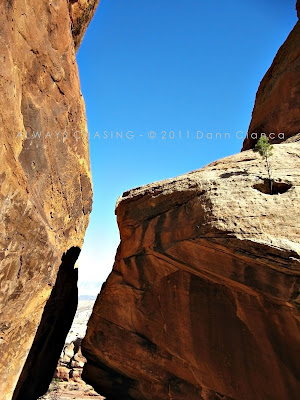 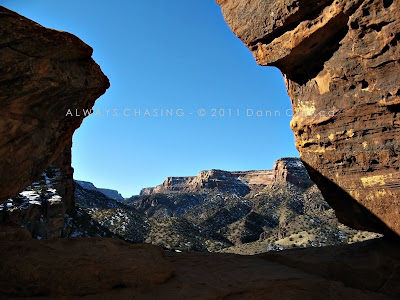 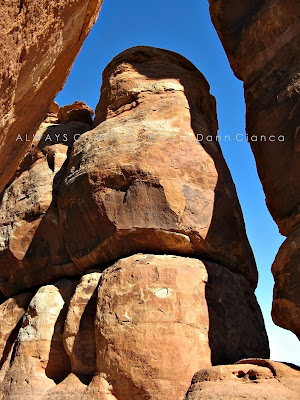 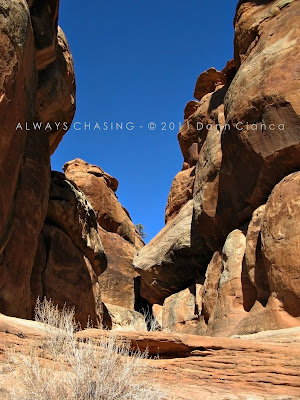 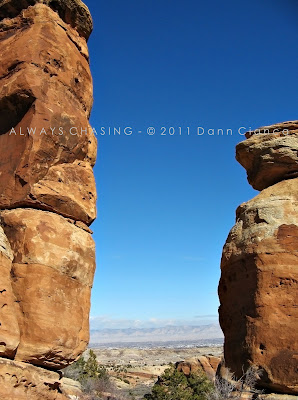 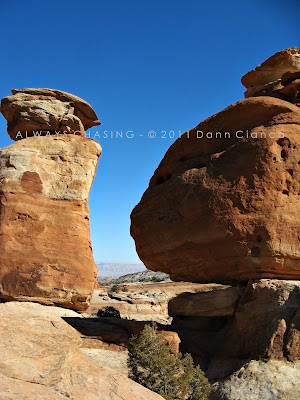 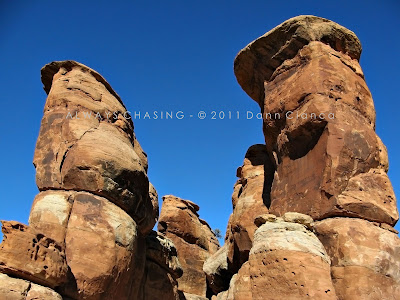 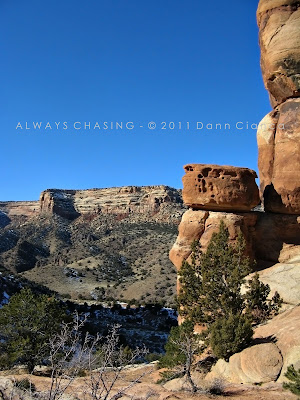 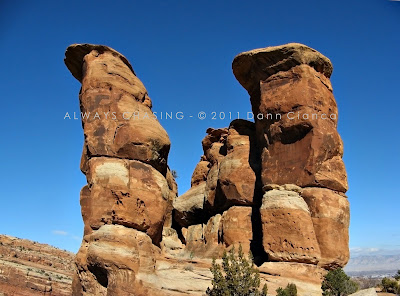 This should give you a pretty good idea as to what The Devil's Kitchen actually looks like, but perhaps not the scale. I didn't have a person to put in the picture for scale purposes. The trail was blissfully deserted. 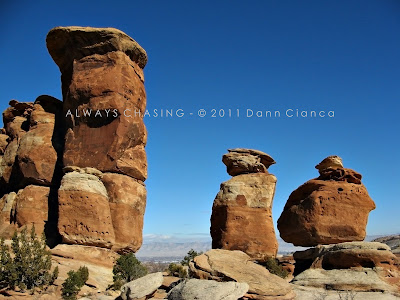 I followed the crest of the canyon's divide to the north side (the No Thoroughfare side), though well above the canyon floor. There were tracks in the snow that lead along the northern face, so I traced them. They led me to a crack in the rocks, which when I explored, split the ridge in half and after an ascent of loose material inside the fissure, I found myself back in the other canyon. It was kind of like a secret passageway.

Upon emerging, I found a nice tree. It posed for me. 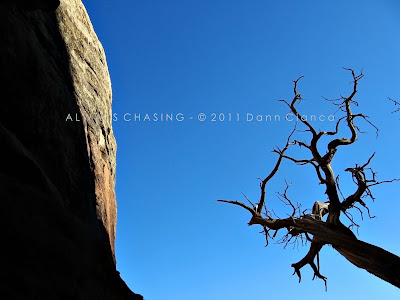 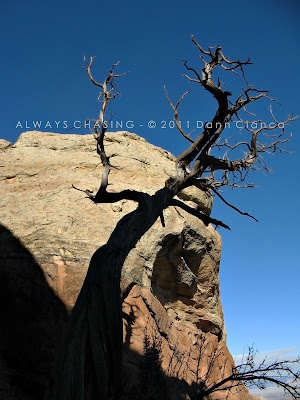 The exit of the passageway didn't exactly leave me in an easy position, especially with snow and ice coating the sandstone in shaded areas. Luckily, I found another short tunnel through the rock and on to easier travels. 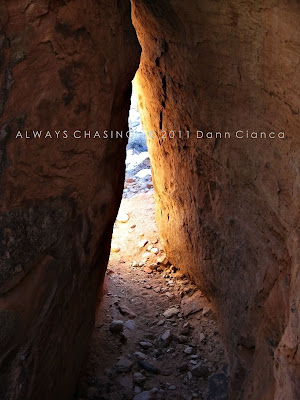 I hung around for a while, taking pictures of interesting features I'd find... 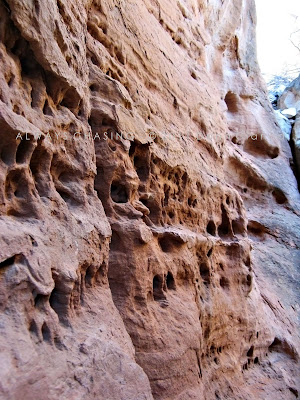 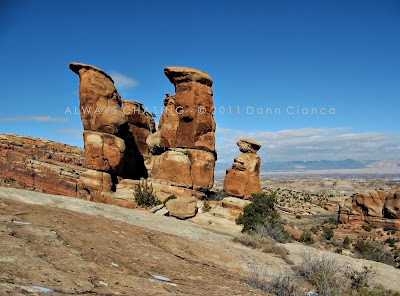 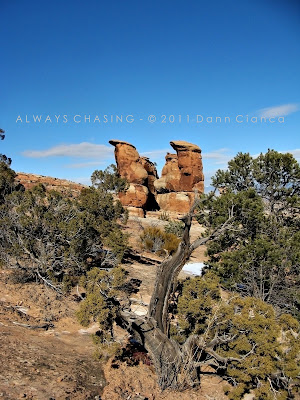 ... before I decided to follow the north face of the unnamed canyon deeper along the divide. There were other interesting features along the ridge that were worth checking out. The following picture is the "sandstone shelf" I mentioned earlier. 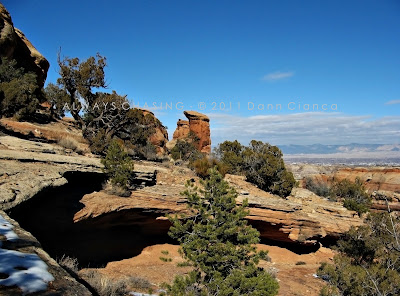 I reached the end of the box canyon, albeit looking down into its terminus and briefly looked over the easy 100-200ft drop to the bottom (not pictured) before heading back out of the area. 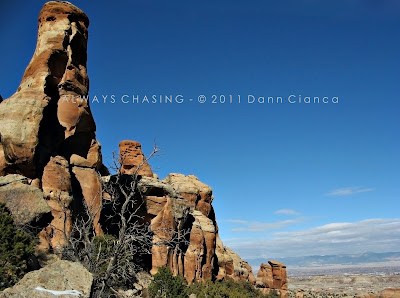 Formations along the canyon divide. 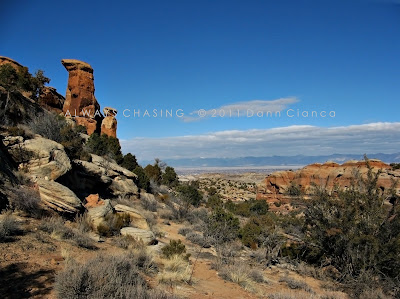 The trail out of the canyon. 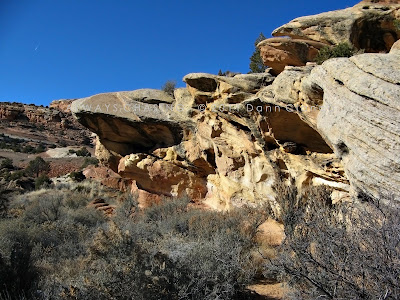 Rock formations near the trail
head.

After leaving the Devil's Kitchen, I rejoined the No Thoroughfare Trail and as I had previously decided, took the path toward Echo Canyon. But that's a whole other photo set for another time.

Thank you, it is! Miss you guys!