During the spring of 2011, my mind often found itself wondering about hidden waterfalls, tucked away in the arid reaches of the Western Slope of Colorado.  I spent a lot of my free time pouring over topographical maps, locating waterfalls and speculating at locations where unnamed falls might be.

I had my eyes on the Roan Plateau as several falls were noted on official USGS maps.  The unfortunate circumstance was that two of the three falls were located on private land and the third required a round-about path to reach.  Still, the area intrigued me.

After examining the area closely on Google Earth, I found evidence that there were as many as seven towering waterfalls in this area, each at the end of a box canyon; tributaries of Parachute Creek, carved out of the Roan Plateau.  As you can imagine, this got me a little excited.

I was a little discouraged that all of them were on private land, but I planned an expedition to the area to see if I could get permission to explore.

On a Tuesday in May, I headed to Parachute on I-70 and crossed my fingers.  Parachute Creek flows out of the Roan Plateau and if you look on a topographical map, its drainage is really quite spectacular: 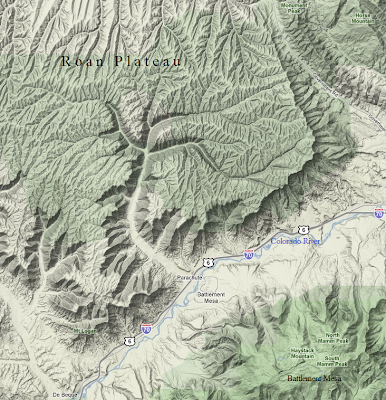 I took the road northwest out of Parachute which was paved for a decent stretch.  It was crowded with traffic, however, as the area is heavily resourced by natural gas companies.  Unfortunately, where the canyon diverges into three distinct branches, I came to a manned gate.  Many vehicles were parked around the area and I noticed a few deer walking around.  This was the boundary to the private land which I had seen on the maps.  I was a little disheartened to realize that I was not going to have an easy time gaining access.  I walked to the gate station and spoke with a couple of people who told me they could not allow my passage.

They did, however, confirm what I was speculating:  there were several "unbelievable" waterfalls at the ends of the canyons.  I was told I'd have to go to the company headquarters outside of Parachute to ask permission, so I turned around and started heading back down the road.

Much to my astonishment, I saw a towering waterfall up on the cliffs.  I hadn't been paying too much attention (obviously) on the way in and missed it.  I wasn't trying to linger too much, so I popped off a quick shot before continuing on. 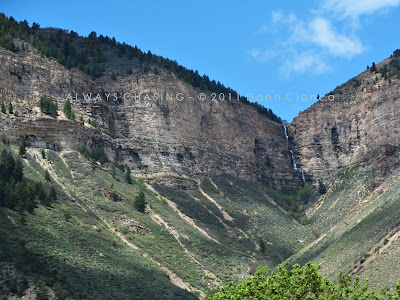 But wait, there's more.  On the other side of the valley, I spied another waterfall... this one tiered and doubly impressive. 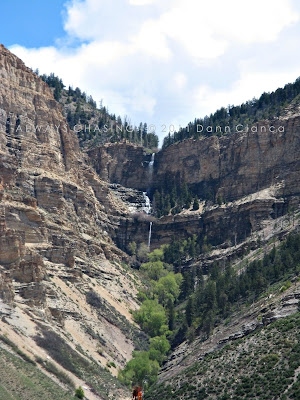 And farther back down the road I went, spotting three more distant waterfalls at the end of canyons with surprisingly small drainages.  The three falls pictured below are all on the west side of the canyon, at the ends of side-canyons.  I'm not sure which, if any are named.  The light was bad and I was hand-holding full zooms, so the photos are terrible, but you get the point... 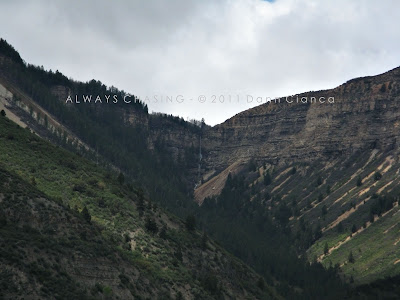 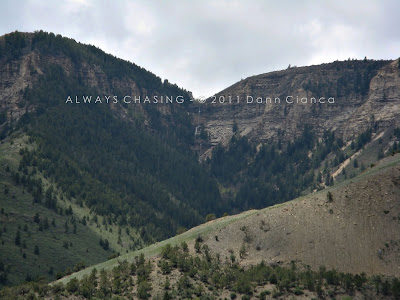 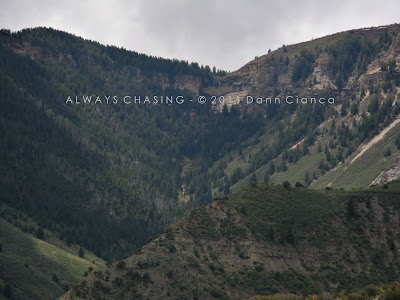 I stopped off at the office to try and get permission to go behind the gate, but all I really got was a business card with a phone number to call.  Somewhat defeated, I decided to explore the Parachute/Battlement Mesa area.  I briefly entertained the idea of taking a long hike to a visible cascade on a creek coming down Battlement Mesa, but after hiking off-trail for about a quarter mile, I realized that the hike would be a lot more difficult than I had previously thought. 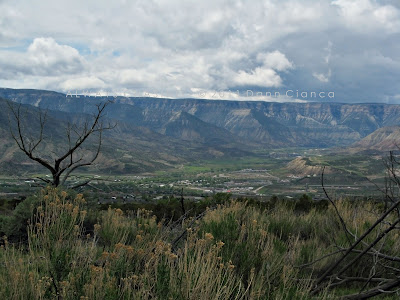 Looking toward the Parachute Creek Valley from Morrisania Mesa.

I headed back to town and had some BBQ at V J's Outlaw Ribs and then tried to drive north of De Beque to check out a few more waterfall possibilities that I had identified.  Unfortunately, I ran into more private land and eventually just headed home.

I've decided not to include the name of the company that owns the land because I'm not trying to alienate them.  I have since called and have been unsuccessful to this point to gain access to the land and gave up once runoff ceased.  I'm going to try again next spring, because I would love to be able to get in to the *bigger* falls on the main branches of the canyon.  I believe one unnamed fall at the end of Light Gulch to be almost 500 feet high.

Any news stories to be had up there? ;)
Maybe you could do a weather report from the base of a nice waterfall in there. Might get the company's interest?
Does look like waterfall wonderland on googlearth.

Well, actually, I did get to do a flyover of the area, but it was quite frozen at the time and nothing stood out. I'm going to try and get in contact with officials at the company early next spring and try and organize a trip. We'll see.

Have you visited the waterfall on the East Fork of Parachute Creek? It is on BLM land and is accessible from the top of the Plateau via the JQS or Cow Creek roads.