It's not often that I get to chase anything severe on the Western Slope.  Sure, there are a few events per year, but my schedule is often in conflict.  This day in late April 2012 was no exception.  I was working news that day and was trying to ignore the probability of severe weather.  The threat was minimal: probabilistic for damaging winds (SPC outlook).

Here's a look at the upper level pattern for the day:  A shortwave rode the base of the larger trough in the northwest...

Though there was some nice support aloft, at the surface... things were a different story.  By mid afternoon, the T/Td was 73º/33º.  Hardly worth getting too excited about.  Regardless, a line of storms formed along a wave in the mid-levels and rode north along the Uncompahgre Plateau.  As it reached the edge, near I-70, it appeared as if there would be a decent wind threat to the I-70 corridor from Mack to Fruita.

I was watching at work while finishing up whatever I was reporting on that day when the first high-wind report of 74 mph came in...

My news director understood my love of severe weather and quickly dispatched me, though the storm was moving fast and already moving through the irigated valley and into the desert.  My main goal was to shoot damage anyway.  The first report prompted a severe thunderstorm warning, the first on the Western Slope in 2012 if I'm not mistaken. 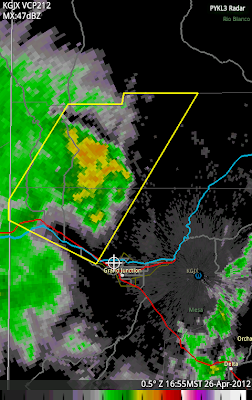 I discovered some downed tree branches near Loma and took a little video so I could haul back to the station and have it on the 6PM newscast. 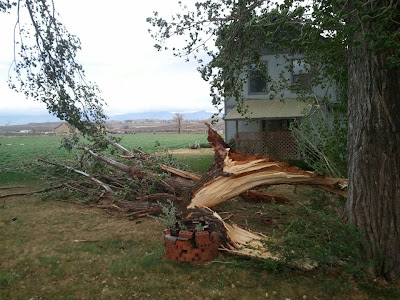 And that was pretty much it.  The storm climbed the Book Cliffs and then eventually dissipated.  Still, it was nice to get to chase for work! 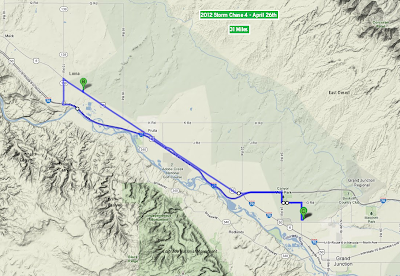