Despite already having been on a decent hike earlier in the day, I was ready for more.  Don't get me wrong, I wanted to spend as much time with my family as possible, so I tried to maximize my time by heading out for my next hike after dark.

There was a 20 foot tall waterfall outside of the boundaries of the Snow Mountain Ranch that I had visited before.  (See account here: http://blog.bigskyconvection.com/2009/08/2009-family-reunion-day-one-august-5th.html )  I wanted to try something a bit different this time by visiting in the dark of night and using light to paint the falls.

After recruiting the company of my cousin Chase, we were off for the falls at just before 11PM.  The trailhead was only a couple of miles from our lodge and exists on a county road.  At the trailhead, we set off, me with my headlamp and Chase with a flashlight.

There was a sign that warned of large mammals, specifically black bear, moose and mountain lion which were known to be in the area.  That was comforting.

The moon wasn't up yet, so as soon as we were in the timber, it was pitch black out with only the light we were casting and the babble of the nearby stream to keep us company.  It became unnerving quickly.  Whether rational or not, my hackles were up.  We spoke loudly and I clanked the metal legs of my tripod together as we walked as to not surprise any large mammals proficient in biting or trampling.

The trail to the falls is a hair over a mile long with a 400 foot, gradual elevation gain.  We arrived after twenty minutes or so and I sent to work trying to make images. 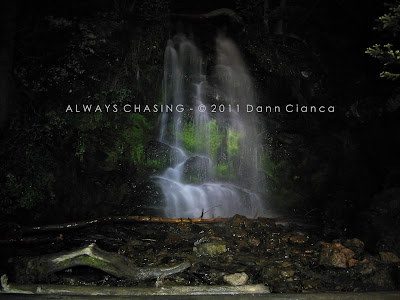 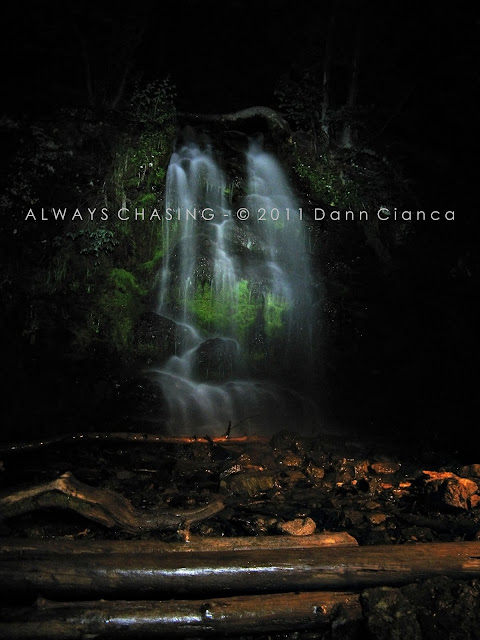 My shoes were still wet from the hike earlier in the day, so I had no qualms with standing midstream to get the shots I wanted.  They came out ghostly and I was relatively pleased... though having a stronger light source would have probably done the scene more justice.

We both posed for portraits before heading back. 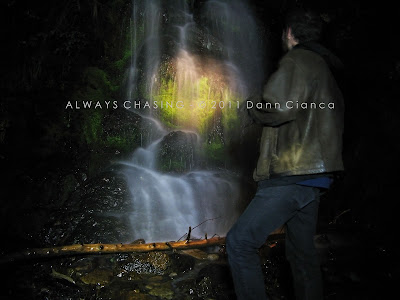 Finally, while heading back, I could see the moon beginning to appear on the horizon through the trees.  We never did see any wildlife, but it sure felt like there were eyes on us most of the time!  ... and I'm certainly glad I didn't go alone! 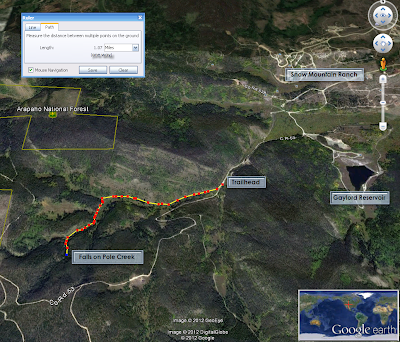