I had a little time one evening and was looking for a short, easy hike.  So, I decided to see if I could find one or two of the popular petroglyph panels on the "front side" of the Colorado National Monument.

I had been neglecting to donate blood until after my Perseverance Arch hike since it usually takes some of my strength for a few days.  So, down a pint, I headed off to something relatively easy.  I started from the Gold Star Trailhead in the Redlands, an unincorporated but developed portion of Mesa County.

There were two sites I wanted to check out, one in Monument Canyon, northwest of the trailhead.  The second was White Rocks, southeast of the trailhead.  I headed for Monument Canyon first, along the boundary.  Eventually, I came to a fork in the trail which didn't necessarily jive with my map.  I elected to take a trail to the left which gained elevation and appeared to make a pass between some higher terrain, the precambrian bench on the left and a sandstone "island" on the right.  Despite not having a lot of energy, I slowly climbed about 350 feet to the top, huffing and puffing and stopping several times along the way.  All the while, I kept my eyes peeled for 'glyphs, which I found none of.

At the pass, I explored a ledge on the "island".  (I call this an island because it is like a smaller version of the larger "Island" which is a large piece of sandstone sheered by the monocline fault which exists along the edge of the Monument.  This smaller island was formed by similar circumstance.

I lingered there for a few minutes, amused by the birds which flew swiftly by, seemingly inches from my head as they paralleled the cliff face.  Woosh!

Eventually, I decided to head carefully off trail and descend into Monument Canyon.  There was not a trail.  I remained on loose sand and slickrock for the entirety and eventually met up with the trail in the bottom of the canyon.

There, I came across a small, worn panel right beside the trail.  I had walked past this spot several times before without noticing it.


This was not the panel I was looking for, however, so I continued searching the area until I eventually found another.  The rock art was somewhat damaged and quite faint.  The strong lighting did not help, but I attempted to take a couple of images to record the scene. 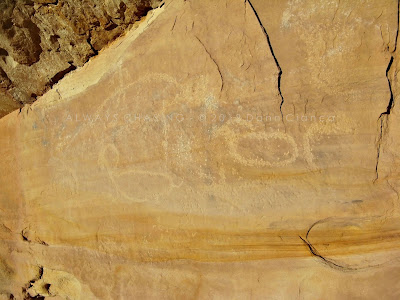 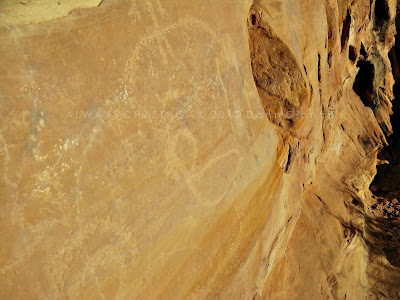 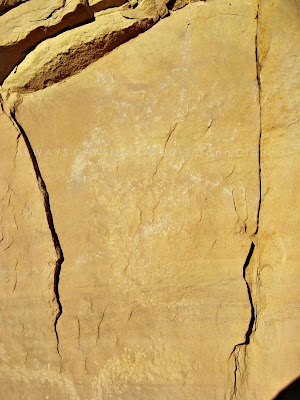 Not wanting to climb the 350 feet back up to the pass, I decided to find an alternative way back.  According to the map, there is a perimeter trail, but I could not find it.  I did find a large, open portion of fenceline which seemed misplaced anyway.  Based on my bearing, it did not match the angle of the Monument's perimeter.  Directly on the other side was a trail which eventually linked back to the fork I spoke of earlier.  It did not appear as if I was on private land, so hopefully I was not inadvertently trespassing.

I had a bit of energy left in me as I reached the trailhead, so I took the short trip southeast to White Rocks looking for more rock art.  I found a couple of panels there and may have missed another (which I have seen pictures of).

I hiked around the rocks for a while and then decided to head back to my vehicle as the light was getting low. 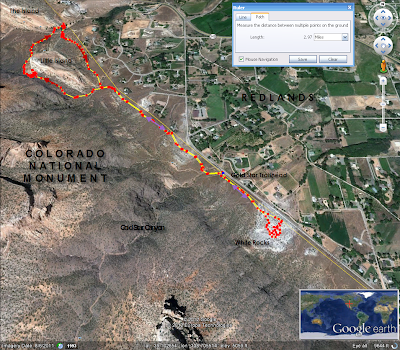 Sorry, the petroglyph locations are not marked on the map.  If you really want to see them, you should have no trouble finding them yourself.  As always, remember not to touch, disturb or vandalize the rock art in any way.