I was hanging out with Skinner last night and our plan was to go check out the lunar eclipse. I picked him up in Aurora and on our way out of the parking lot, he says to me: "Dann, is that a deer?"

"It's probably some Christmas decoration," I assured him.

I look over to my left and sure enough, there is a mule deer on the grass median between the road and sidewalk. Of course, we had to investigate. I flipped the car around and Skinner got out, ready to stalk the deer. In my head, it seemed like one of Santa's elves was trying to break a reindeer. The picture speaks for itself: 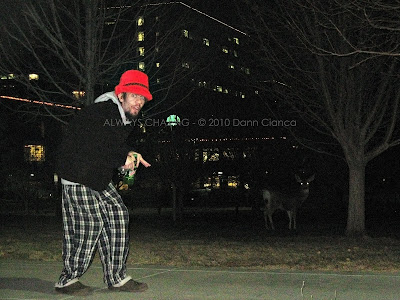 The doe walked through a few trees and we decided to pull into the parking lot behind her and see if we could get a good picture. Finally, we spotted her again and she didn't seem too alarmed. I actually set up my tripod and approached her for this picture. If I recall correctly, I wasn't zoomed in. I was only about twenty feet from her. 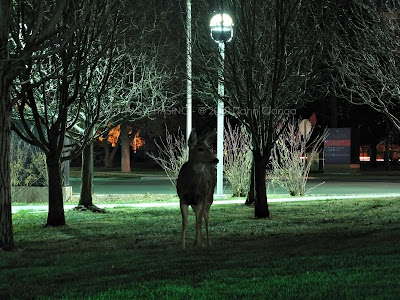 While I was watching her, I felt like I was being watched and not by Skinner! I turned to my right to see at least six more deer standing in the shadows, about twenty five feet away. Keep in mind that we are in the middle of Aurora and not on the outskirts or in the foothills.

I tried to get a good photo, but they were on the move; not cooperating with my longer exposures. I fell in behind them as they slowly moved and found it interesting that I could *smell* them. There were also two bucks in the group, one of which was an 8-10 point! Finally, they stopped and posed for a while. 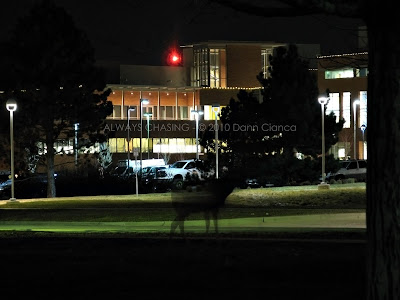 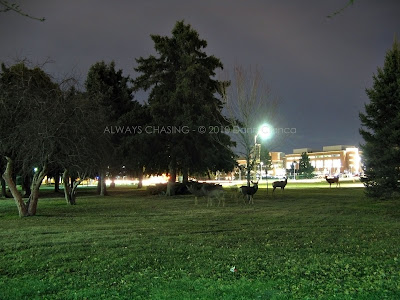 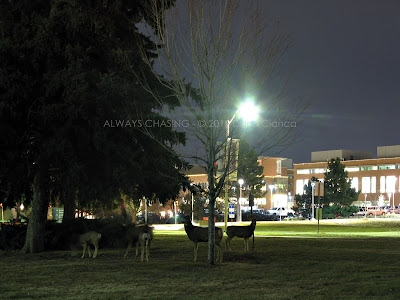 Buck in the center.

The herd crossed the street and since the moon was already being darkened by the shadow of the earth, we headed out on I-70 to Airpark to meet up with Hambone. It felt good to be eastbound on I-70 again, even if it was only an eclipse chase. When we arrived at Airpark and met Scott, there was a thin veil of cirrus over the area but it soon dissipated and by totality, we were in the clear. We tried to get some good shots, but I felt limited with my point-and-shoot. I did end up happy with the results though. We also posed for a few shots and observed a very fast moving plane leave a contrail over the sky. It was pretty cool! Actually, it was pretty cold. I would take a few pictures and then go warm up my hands. The light, biting wind in combination with my aluminum tripod legs kept my fingertips a-sting. As soon as totality rolled around, we snapped a couple of pictures and rolled out.

Here are a few shots from Airpark: Crop of the moon near half-eclipse. 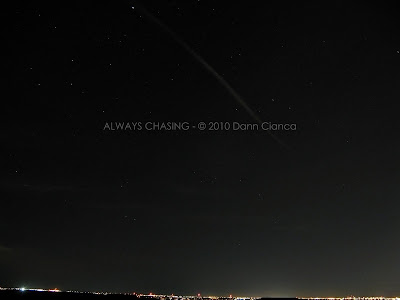 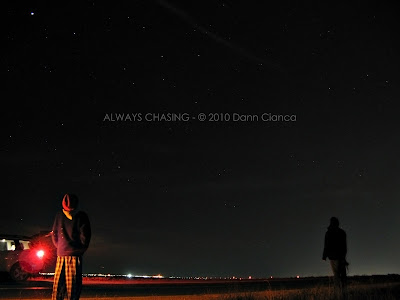 Skinner and Hambone taking in the view. 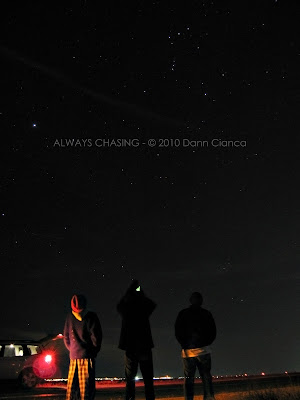 Group shot... wish I had a wide-angle to get the moon too! 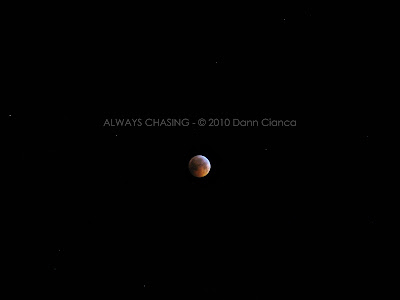 Best shot I got of totality. Zoomed but not cropped. This is the full image. 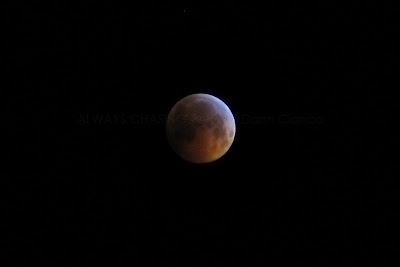 This is a crop of another image, but a nice, close look at totality.

Between the deer and the eclipse, it was quite the eventful night... and it's always good to meet up with friends.

Had a blast last night! Glad we all met up for it, and yes it felt almost like a relief to be heading east on I-70 again. Not the last time I'm positive!

Glad you got the shots you did, it was (believe it or not) completely cloud here in AZ, but I did see the light of the moon before and after eclipse. Love those deer!

Just getting caught up on the blogoshpere, great shots Dann!

I want to do this again!

Indeed! This was a fun night!