We haven't exactly been in a benign pattern across the United States so far in December. In fact, we've seen a few interesting events... most of which have been as far away from Denver as possible!

Yazoo: The Third Act
-Yazoo City, Mississippi can't seem to catch a break. The city had already endured two tornado strikes over the course of the year when it had another scare on December 11th. I was watching this storm closely as it moved through the area. It exhibited rapid rotation on radar (as seen below) and the couplet moved just south of the city. While no actual tornado was reported, there was some decent wind damage just south of town. Take a look at the storm relative velocities! 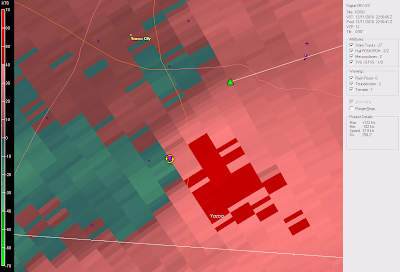 Ice In Havre
-On December 12th, Havre, Montana experienced some freezing rain. I thought this would be a good opportunity to demonstrate how this happens. Take a look at the image below. It is of a model (RUC) forecast sounding for the time period that Havre experienced the freezing rain. On the image, the red trace shows the air temperature as we move up in the atmosphere; the green trace shows the dewpoint. On the left side of the chart, the numbers show millibars (mb) or a measure of atmospheric pressure. Pressure recedes predictably for the most part as you move from the earth's surface upward. The most important thing to look at here are the diagonal lines. These show temperature in degrees Celsius. Obviously, the 0ºC line is the freezing point. You can see on the chart that from 870mb to 780mb, the temperature is above the freezing point. As we move lower than 870mb, or closer to the ground, the temperature is below the freezing point. Also notice that the atmosphere is saturated (or the dewpoint is the same as the temperature) up to 850mb. In this example, a warm, Pacific airmass has made it over the Rockies and is overrunning the very cold, dense continental polar air mass already in place. It is hard for this warm air to mix down into the dense, cold air, so the cold air can effectively pool below it. When precipitation forms in the above-freezing layer and falls into the shallow cold, sub-freezing pool, it freezes, thus freezing rain. Kind of cool, eh? 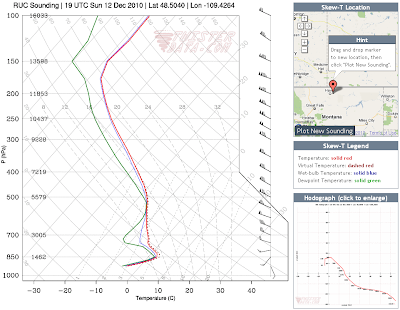 Denver Doldrums
-The pattern hasn't changed much locally. It has been warm and dry and we are still in wave cloud season. (Wave clouds at sunset pictured from my bedroom below). The metro area did receive a dusting of snow on the 17th, but it is all gone already! 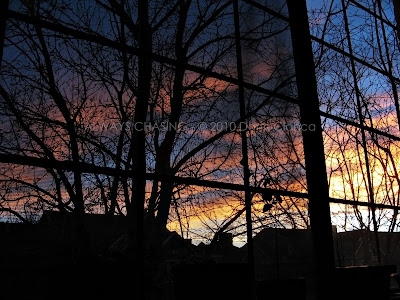 Geminids
-Took a trip out on the night of the 12th to Barr Lake to see the Geminids. This was actually the night prior to the peak, but I was near the edge of the metro area and my cousin and his friend were game to head out. Unfortunately, there was a wave cloud directly overhead which only gave us a few gaps to see through. We were there for about an hour and I saw 9... many less than others out the next night, but I considered it a successful trip. I took a couple shots at capturing one in frame, but struck out. 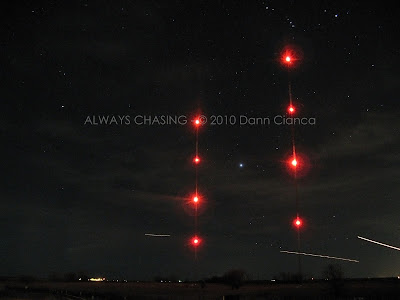 Radio towers and planes taking off from Denver International. 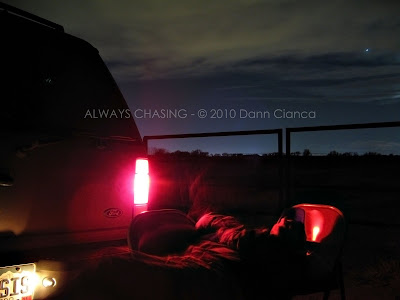 My cousin Brian laying out on several folding chairs, surveying the sky.

Aumsville Tornado
-Tuesday (the 14th) kept my attention all day as a rare tornado struck the town of Aumsville, Oregon. The tornado was spawned by a small supercell which formed in a favorably sheared environment in the eastern stretches of the Willamette Valley in Oregon. Fortunately, no one was injured by this tornado but there was quite a bit of damage. It was rated an EF-2 by the NWS (more info can be found here. 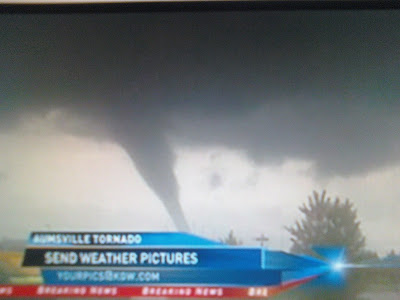 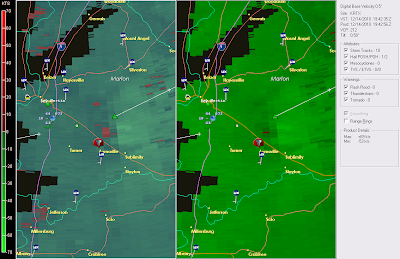 Side-by-side views of the 0.5º Base Velocity and Storm-Relative Velocity images. Rotation is evident in both images.

Of The West
-I took a trip west of the divide on Wednesday (the 15th) where there actually is some weather! Of course, the mountains have been doing a fantastic job of keeping the weather out west and not along the Front Range. It is still rather dry on the West Slope, however, so most of the precipitation impacts the mountains and leaves the valleys relatively unscathed. Let's just say that the drive back to Denver that night was a bit more interesting as Vail Pass closed in front of me. As I was exploring the town of Minturn, it reopened and I was on my way. 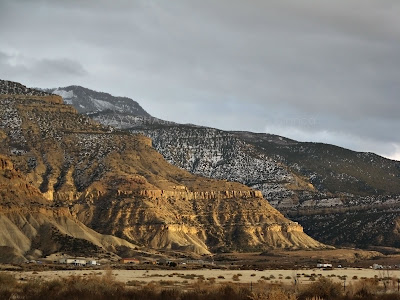 Evening light graces the sides of Grand Mesa as seen from Palisade, Colorado, while it's flat top is dusted with snow. 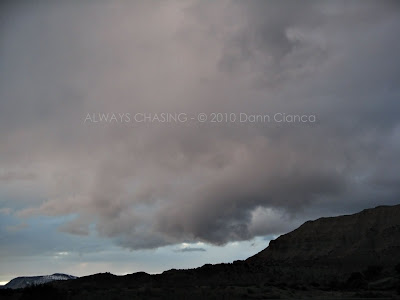 The interaction between the ascending air mass and the topography causes some interesting cloud structure, tinted pink by the setting sun.

In closing, I'm heading home to Montana for Christmas and to see my family. I'm very excited to see everyone and spend a couple days in my home town. Plans get a little more sketchy when I get back as I will likely be packing up and moving from Centennial! Don't worry, this is a good thing... but you will have to wait a while for details. See you on the other side.

Merry Xmas Dann, best of luck with your journey, to Montana and beyond!