Finally, it's time to sew up this trip to Arches. Please click on "older posts" or in the archives section in the sidebar to see previous entries from this trip.

Our last stop of the day was Delicate Arch. It is perhaps the most famous arch at the park, so much so that it adorns the license plates in the state of Utah. To see Delicate Arch, it's best to go at sunset and this was our plan all day.

After wrapping up operations at the Devils Garden, we hit the road back south. In the late afternoon hours, the landscape of the Cache Valley was beautifully lit with the snow-capped peaks of the La Sal Mountains to top it off. 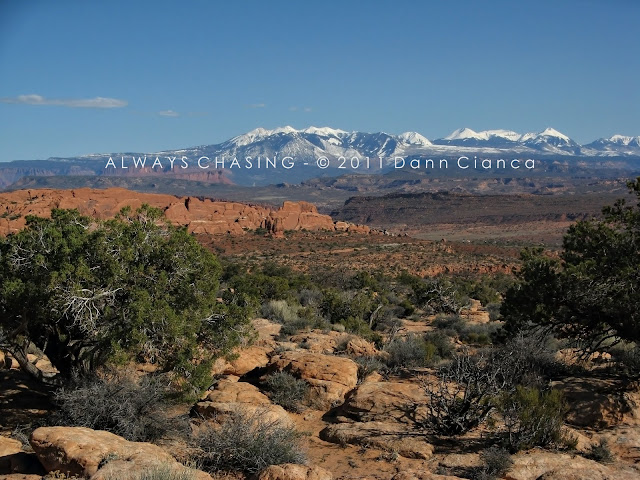 While most of the attractions of the park can be found along the main road, one must head east through the Cache Valley to get to Delicate Arch.  When we arrived at the trailhead, I was surprised at hall small the parking lot was.  It was also completely full, which was disappointing.  You would figure since this is one of the most popular attractions, the lot would be able to accommodate the crowds.  We surfed the lot for a while waiting for someone to leave but ended up manifesting our own spot near the RV parking.

The signage at the trailhead described the hike as challenging, but we set out beyond the lot and over the Salt Wash, which had flowing water in it.  Past an old homestead, the trail climbed a rocky hill, descended back down and then ascended slick rock for a good long while.  The slick rock was at a relatively steep angle which caused us to stop to catch our breath from time to time.

Eventually, the path seems to reach a false summit or sorts and levels out aside from a few up-steps on occasion. I had figured that we would be able to see the arch by this time, but I didn't know that it was hidden.

Finally, the trail hugs the north side of a sandstone wall and exposes the hiker to heights.  Due to the concentration of people in this area, we knew we were close.  With a few more steps, we rounded the corner into a natural amphitheater with the arch sitting on the main stage. 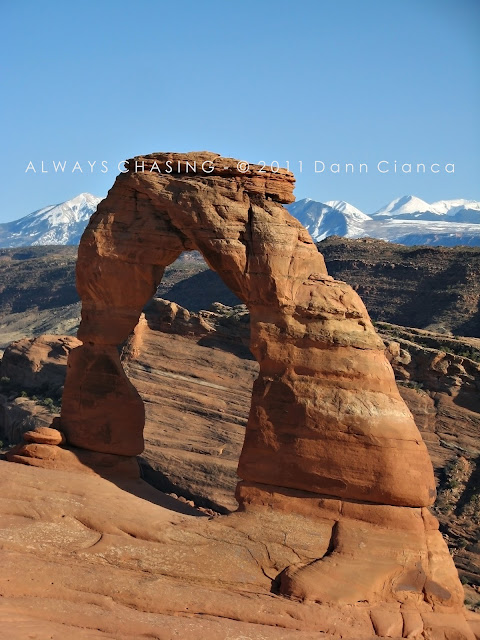 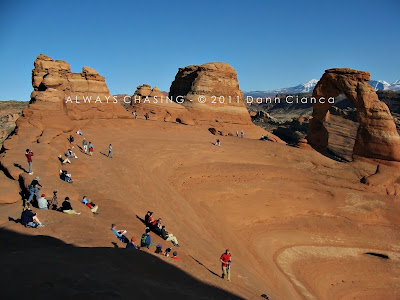 The natural amphitheater.
As you can see, there were quite a few people there (more so than in the image above).  The three of us kind of stared, slack-jawed at the breathtaking scene for a while.  I moved around a lot, looking for different angles to take pictures.  This venture took me out onto some exposed areas that were a little discomforting and I marveled in not so much the scenery, but at all the people that just seemed to sit there with unbroken stares.

I also enjoyed the game of cat and mouse played by the photographers and the tourists wanting to get a closer look.  Many revelers would approach the arch and stand under it, posing for pictures or just beholding it while the distant photographers sighed in annoyance.  In the moments that the arch was left alone, the clicks of the shutters came alive like some sort of off-tempo drum solo.  I'll admit, that I grew annoyed at times especially when people lingered, but given that we arrived at an hour prior to sunset, I realized I would have my opportunities.  In the meantime, I explored the area. 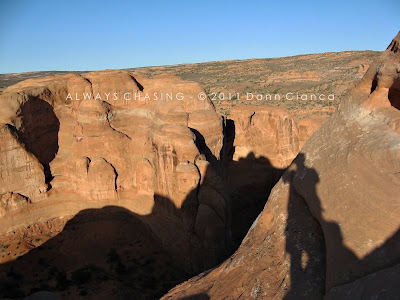 Looking back to the north. 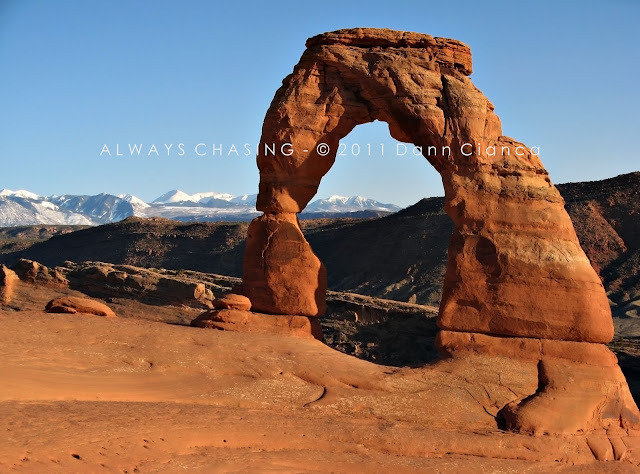 The light starts to get better.
Though the scene was beautiful, I honestly found myself somewhat bored.  I had already snapped what seemed to be a million pictures.  Katherine was just leaning against the rock, taking in the view and Kendell was doing the same, but some place else.  I realized that we were all tired from a long day of arch-viewing.
We did take a moment to ask nearby gazers to capture a picture of us. 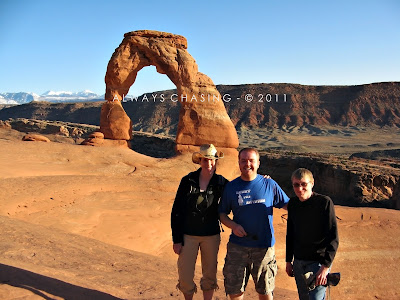 Though it wasn't quite sunset yet, I think we were all satisfied with our experience and decided to hit the trail and beat the crowd back down to the lot. 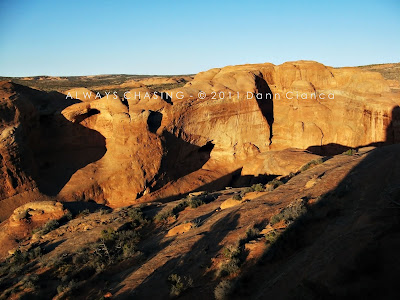 Surroundings.
As we were leaving, we decided to explore a hole in the the sandstone wall that we would come to know as Frame Arch.  There were several kids playing around but they were kind enough to make way for my rickety tripod and point-and-shoot camera.  I found the view from the center of the arch to be amazing. 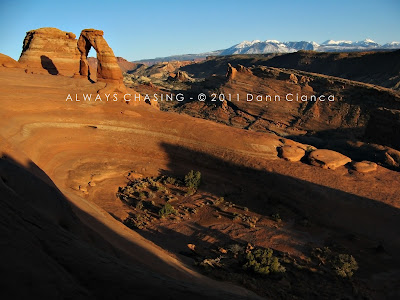 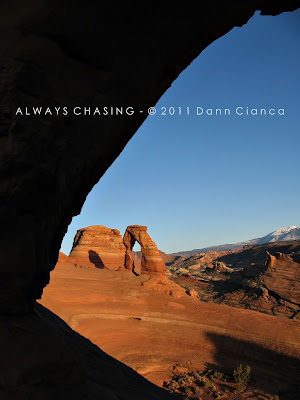 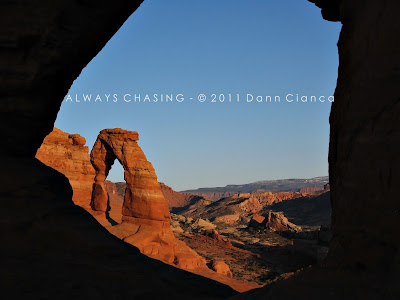 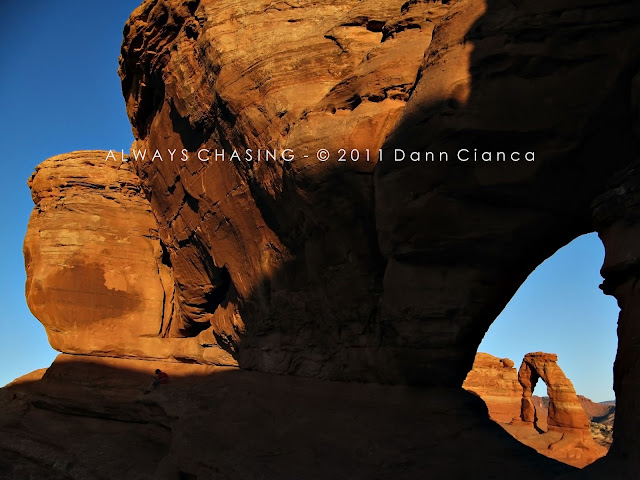 Delicate Arch through Frame Arch, my favorite shot from the day. 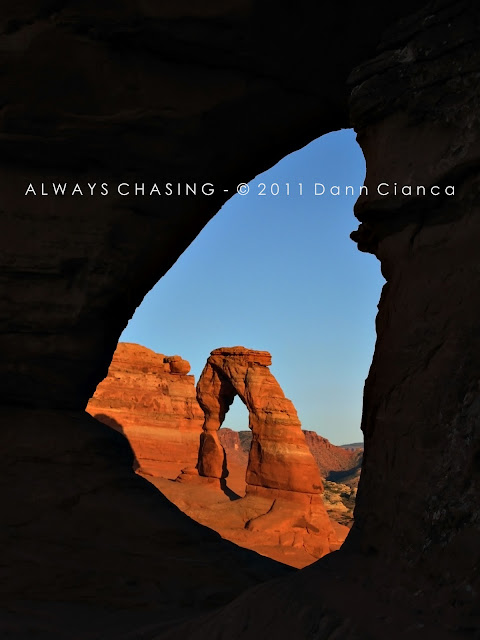 After both Kendell and I enjoyed the view for a while, we returned to the ledge and followed Katherine, who had already started to head back.  I have a recollection of Kendell chasing a quarter down off the ledge, but it might be my imagination.  I'll have to ask him...

Anyway, as the sun began to set, it bathed the trail back in a beautiful light. 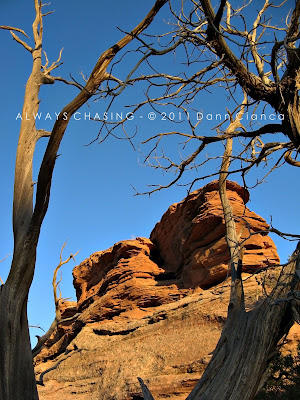 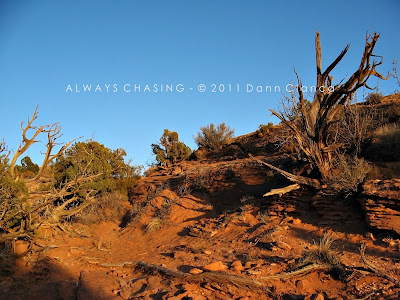 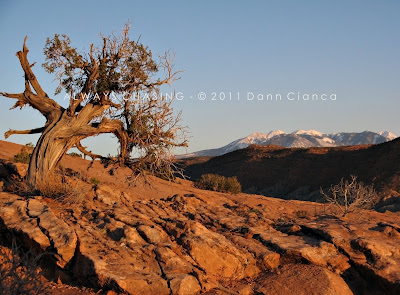 Sunsets don't last forever, but by the time we approached the parking lot, it was still a little light.  I realized that from this point, we could see a distant arch off to the south; perhaps one of the window arches. 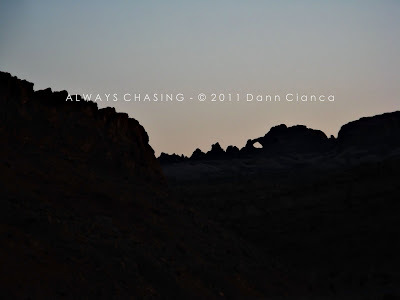 Finally back in the vehicle and feeling the effects of a long day of exploring, we made our way out of the park.  The red sand stone was still quite beautiful in the dusk light, so I stopped once again to get a couple shots.

Windows Section and the distant La Sals.
We left the park and headed into Moab for dinner at Eddie McStiff's.   I wanted a beer but was driving back, so I settled for a lot of water and iced tea.  The "Southwestern Burger" was a little bland but otherwise good.  I think we were all just happy to have a place to sit down and relax for a minute.
After our late dinner, we hit the road north on US 191 to I-70 and made tracks back for Grand Junction.
All in all, I really enjoyed our visit to Arches.  I'd like to go back and really make an effort to plan my shots, but I understand that it might take a few days to get everything I want.  I also can't imagine visiting in the heat of summer.  It was only in the 50s and it felt pretty warm.  Temperatures average in the 90s all summer long.
I will go back.  After all, I didn't even make it to the Windows Section.  There's still a lot to explore.
It was also great to have friends in town for my "weekend."  Though it was only two days, it felt like a full vacation and I was certainly glad to have good company.
Anyone else want to come visit?
Dann.
Posted by Dann Cianca at 12:24 AM

Dan, I think there HAS to be a way for you to make some extra $$ from these photographs, some of them are GREAT. I loved the arch through the arch one, fantastic framing.

Thanks guys! Can't wait to see all of your SA pics!

Very nice Dann
A little snip off of sky and that first one would be sweet in a frame.
I want to come down there this winter but I don't feel like getting my nards groped to get there. Or to get back out haha.

I can see nard-groping being a adventure-deterrent. Maybe you could drive?