It was a Sunday morning.  I'm not quite sure why I woke up early... perhaps a text from one of the other weather guys, but after a check of the radar I was awake and out the door by 8:30AM.  Convection had been hard to come by during the year so far and I was chomping at the bit to get out... especially as warmer air was moving north on the Plains, causing a stir that was quite "audible" via Facebook from my more fortunately located chaser brethren.

I was using a combination of PYKL3 and My-Cast radar products as I drove south through downtown and across the Colorado River for a decent view of the storm as it rolled in.  There was some indication of lightning but I didn't witness it personally.

From a bluff above the Gunnison River, I watched as the storm pulsed east across the Grand Valley and off of the northern most extent of the Uncompahgre uplift, colloquially known as "The Monument."  I was hoping for some shelf-cloud structure, but the convection along the cold front (the instigator in this case) was relatively diffuse.  Still, in the morning light, it was somewhat photogenic. 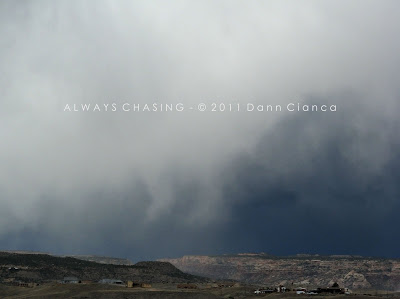 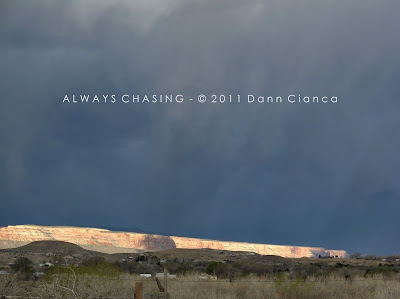 Illuminated cliffs of the Colorado National Monument
The highest reflectivities began to fade in my immediate area with areas to the south beginning to pulse up, so I drove south through Orchard Mesa and out of town on US 50.  Again, my hope was that some sort of structure would evolve on the leading edge of this fast moving line of storms.  The brilliant, rising sun provided a rare (for me) morning rainbow, which I stopped to take in just south of Whitewater.  A good deal of dust was getting kicked up by the outflow winds as well. 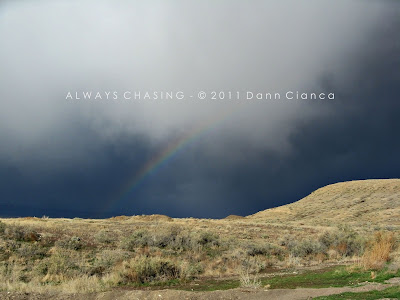 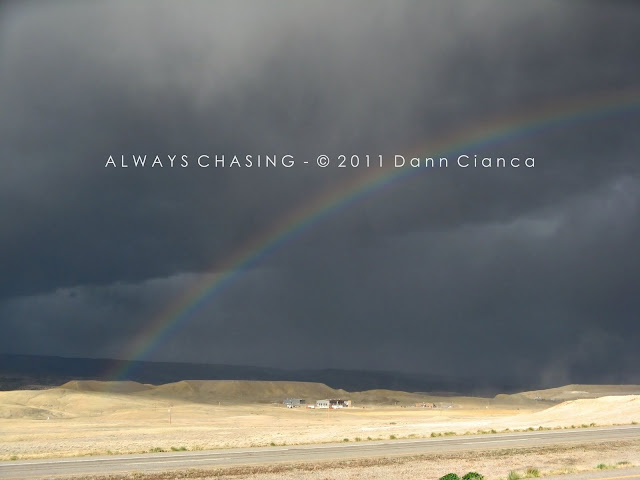 Whitewater Rainbow
The line only seemed to pulse with higher areas of reflectivity and it was a rare occasion that one spot stood out from another, so I decided to stay close to home and backtracked back north of Whitewater to the junction of US 50 and Colorado 141.  The junction is on higher ground and upon exploring the area, found a short road to the top of a bluff; the end of a mesa that hold a drag strip of sorts.  From there, I was able to easily survey the surrounding lands. 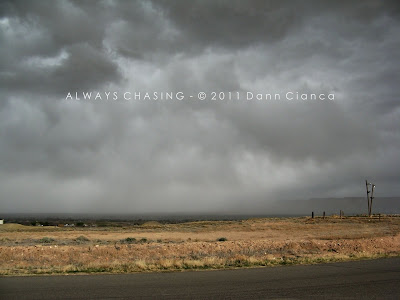 The storm moving through Grand Junction. 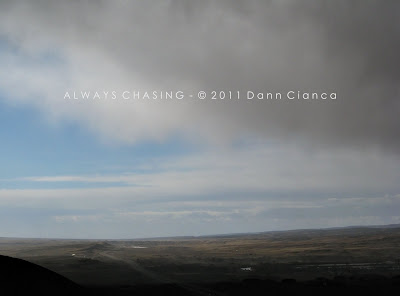 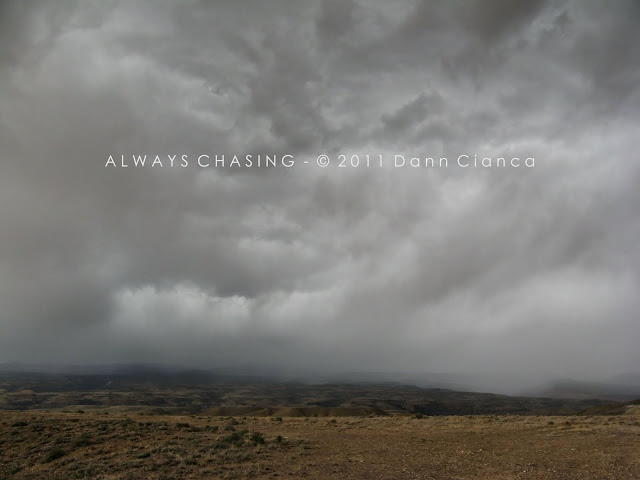 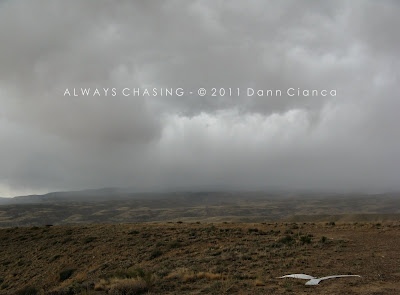 An area within the line began to strengthen some twenty miles to the south, so I elected to pursue it, returning to US 50.  Unfortunately, as was the case with most everything I had attempted to "chase" that day, the area began to weaken.  I made it to the Mesa/Delta County line on 50 and sat at a pull-out, watching the incoming line arrive.  The sun was out for a while, but as the high clouds jettisoned from the line pushed through, the light faded. 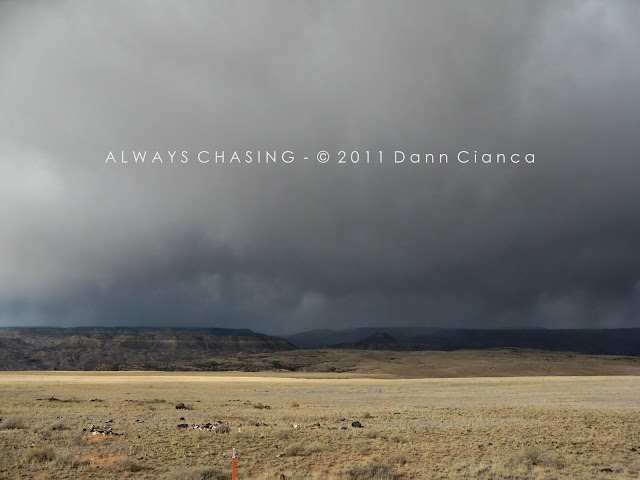 The line coming out of the Dominguez Canyon area. 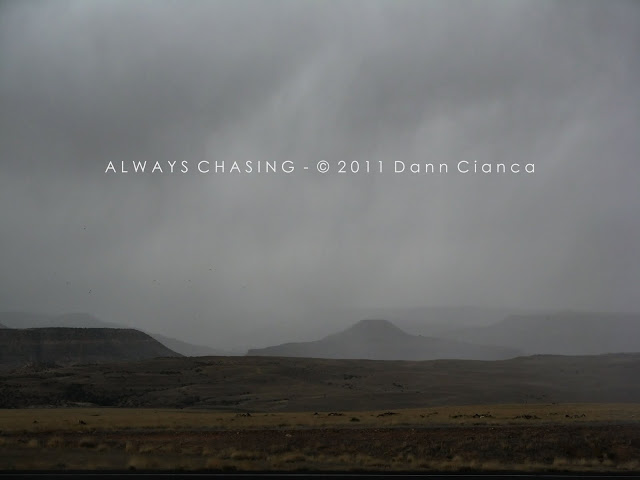 Dominguez Canyon and Triangle Mesa area.
As the rain and wind arrived, I sat on the side of the road, enjoying the smell... much different than the sparse winter snows.  Eventually, I decided to continue on north.  I tried to target higher areas or reflectivity, but there wasn't much to really see.  I took a short detour off of 50 but it was uneventful. 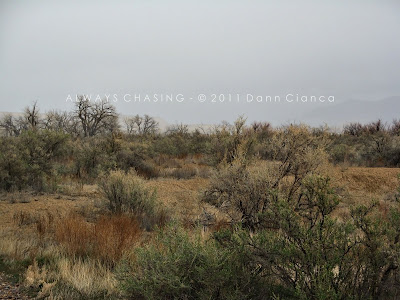 Kannah Creek area.
As the line passed, convection popped up on the north side of Grand Mesa, but it was out of my reach, so I elected to head home and shower before meeting friends for brunch.  While I can't say that I ever consciously have "brunch", I was invited and wanted to go.  Eventually, as the storm passed through the Rifle area, it generated a 75mph wind gust, but that was the extent of the severe weather for the day.

It was a nice early morning surprise chase that didn't really yield anything noteworthy save for the fact that it had been a while since I had chased anything and it certainly felt good to get out. 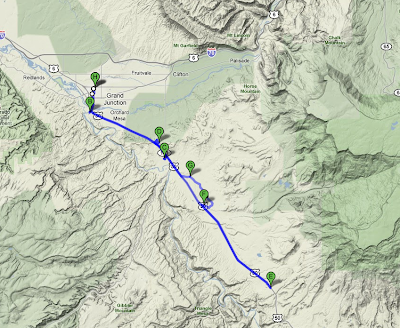 For many, this would hardly be a chase, but I'll take what I can get!