As my friends on the Front Range were regularly hitting the roads eastward in search of tornadoes, I spent most of the spring trying to ignore the weather, at least on the other side of the Divide.  I found that spending a lot of time outdoors, exploring my surroundings was the best methadone for my chasing addiction.  Not only was I missing the chasing, however, but my friends and family as well.

In May, I decided that I needed to make a trip to the Front Range to get some dental work done.  My aunt owns a dental practice in the Brighton/Commerce City area, so I made an appointment for a Tuesday morning, the "Saturday" of my weekend.

I planned to drive to Denver after work on that Monday night, go to the dentist Tuesday morning and spend the rest of the day and part of Wednesday with my friends and family.  As the day approached, however, it looked like there might actually be an opportunity to chase.  In fact, it was starting to look like both Tuesday and Wednesday would be chaseable.

Tuesday's setup looked like a nice dryline-ahead-of-the-approaching-trough-if-we-get-enough-moisture setup in eastern Colorado.  For Wednesday, it looked like the best action would be on the dryline in southwest Kansas to north-central Oklahoma.  I decided to ask my news director if I could shoot a story while chasing and then come into work late on Thursday.  This would allow me to be able to chase and not have to be back by 9AM Thursday morning.

After getting out of work late on Monday night, I opted to go to bed early and get up at 4AM to make the drive to Denver.  I always prefer sleeping in my own bed if presented with the option.  Anyway, I made the drive without much effort and spent a considerable amount of time in the dentist's chair, getting a temporary crown on one of my back molars.  The unfortunate truth of my life of dental experiences is that I either A) have a very low pain tolerance or B) am quite resistant to anesthetics.The plan was to meet Scott Hammel after my dental appointment and then we would head out to our tentative target of Eads, home of the Eagles.  The appointment took a lot longer than expected, however, so I was considerably late.  I am still quite thankful that Scott waited!

I was a little out of it as I arrived and met him and Greg Moore at the Peña Boulevard park-and-ride.  I had neglected to feed myself lunch due to time constraints and was thankful that someone donated a leftover chicken taco to my cause.

Finally we were on the road, under the high cirrus deck on the Colorado Plains.  Oh, did it feel good to be on the flat lands again!  I was being endlessly optimistic about the setup because it was probably one of the only setups during 2011 that I would be able to chase.  Many others were downplaying the event.  Still, SPC decided to delineate a 2% tornado risk area for northeast Colorado.  The joke was that the SPC finally came around to the "Dann model".  The clouds were concerning, however.  It certainly was not warm out and moisture was struggling to make it into the area.

It was just after noon and there was no convection of any sort anywhere nearby.  We eventually found some sunshine near Kit Carson, Colorado and decided to wait there for a while.  Dewpoints were only in the low 40s and there wasn't anything impressive upstream to make us believe they would do much to increase, even though the south-southeasterly winds were howling at 30 knots.  The only thing that would increase the dewpoints would be significant moisture convergence.  Models were showing a shortwave ejecting that evening, so we were hoping for something.  In the mean time, I just stood in the wind, enjoying the feeling of the strong southerly flow.  Most chasers would understand what I mean.

Even though this wasn't an ideal severe weather setup, I was not discouraged.  There was no place that I would rather be than out on the plains with a chance.  Tony Laubach was out and about and so was Michael Carlson among other and I was hoping to meet up with them at some point and time as well.

Finally, convection associated with the shortwave was beginning to light up just east of Denver.  Though there was considerable cloudcover, the storms became strong rapidly.  Several chasers were up in the area and we decided to sit tight, to the south in the sunshine.

Around this time, the Storm Prediction Center issued Mesoscale Discussion #797.

Convection fired to our west but it remained weak, even though there was more heating in the area.  We opted to break north to where the shortwave was having a greater influence.  We made haste up to I-70 and then traveled a bit west.  At the time, there was nothing visibly significant about the clouds.  While a strong storm remained up near Fort Morgan, I noticed that something was building to our northwest by looking at the cloud tops parameter on our radar.  Nothing stood out on any of the reflectivity scans, but it looked like something was firing.  So, we opted to head north out of Flagler to stay in front of it.  This turned out to be a good decision.

By the time we reached the Kit Carson/Washington County line, the base of the storm was visible.  We stopped at an old farmstead for a few pictures. 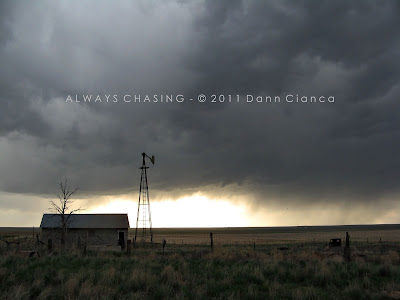 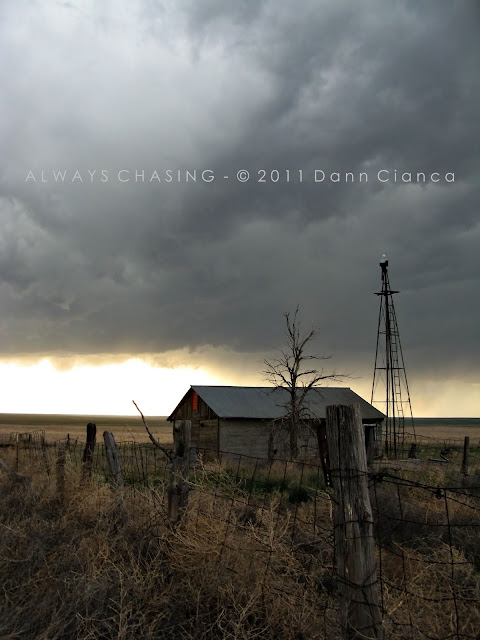 Back on the road northward, we found ourselves in good position on the slow-moving storm.  We stopped once again in Arikaree, where the county road (LL) meets US 36.  We were just observing the relatively high-based storm when someone spotted a big disturbance on the ground. 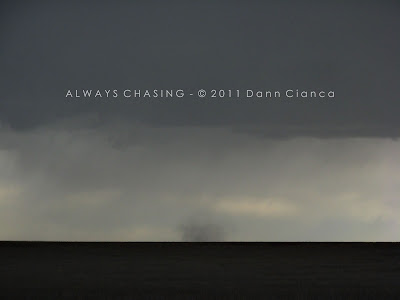 I immediately dismissed it as a gustnado, but continued watching as it seemed to grow taller. 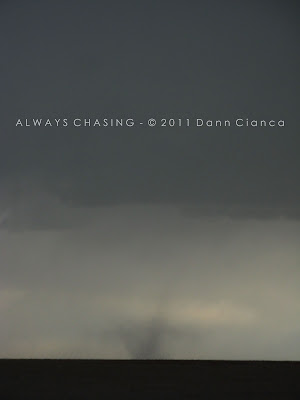 I figured it was a good time to get out the video camera so I could capture this for my story.  While I was doing this, we all realized that this was not a gustnado.  We spotted a stubby funnel cloud above the circulation making it an actual tornado. 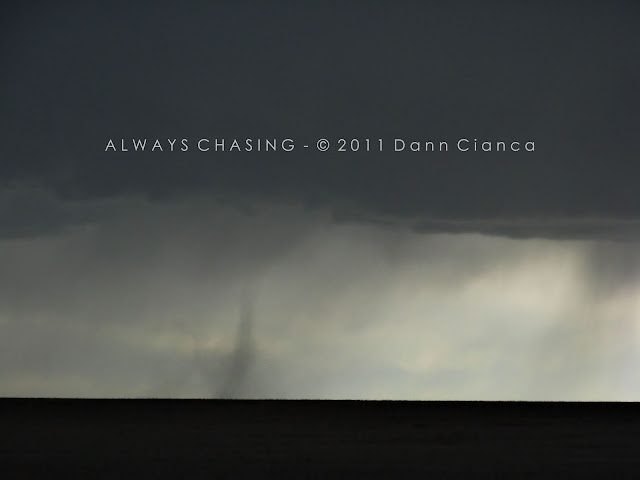 The base of the storm was slowly rotating but there was no wall cloud.  The funnel seemed to be a satellite  on the outside edge of the mesocyclone.  I am fairly certain, however, that this tornado formed by vortex stretching processes that would be more commonly described as a landspout or non-supercellular tornado.  So, call it a mesocyclonic satellite landspout... if it must be classified.  I wish I would have taken more pictures, but I was trying to divide my time between my still camera and my video camera. 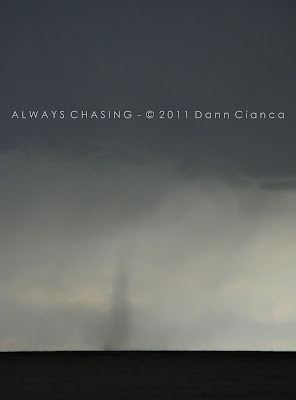 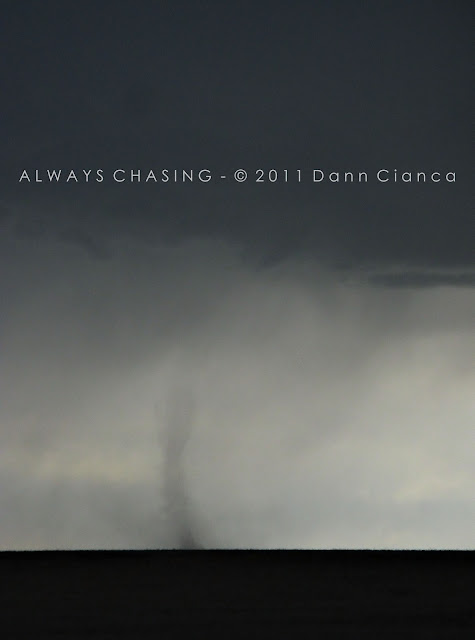 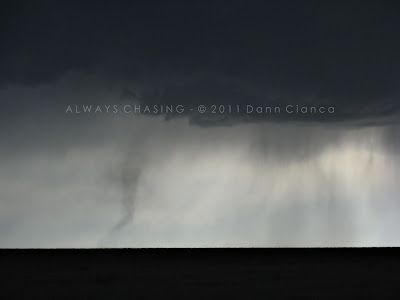 Though my photos do not illustrate this well, we saw at least three ground circulations and at least two funnel clouds.  Given my experience with non-supercellular tornadoes (landspouts), I am fairly certain that we saw at least two weak tornadoes. Scott's video better illustrates this and can be found at the bottom of this report. 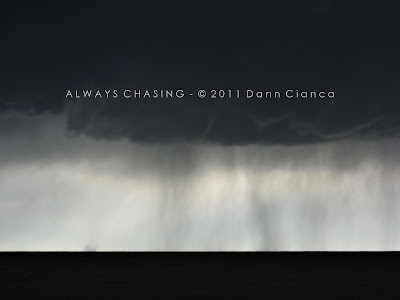 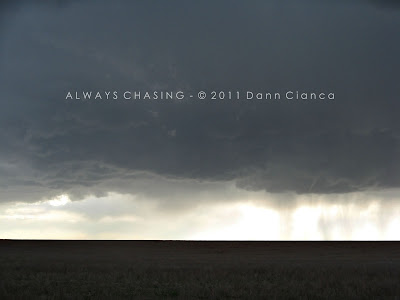 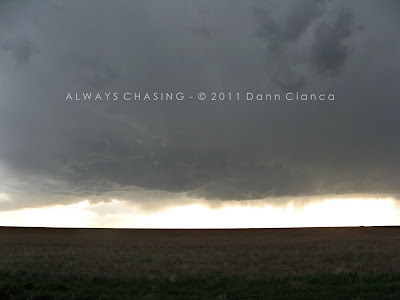 Distant view of the base. 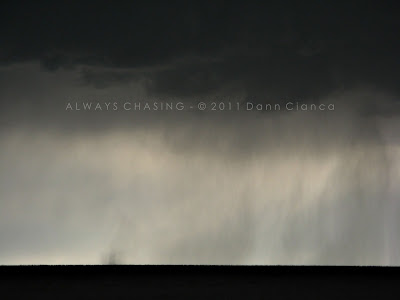 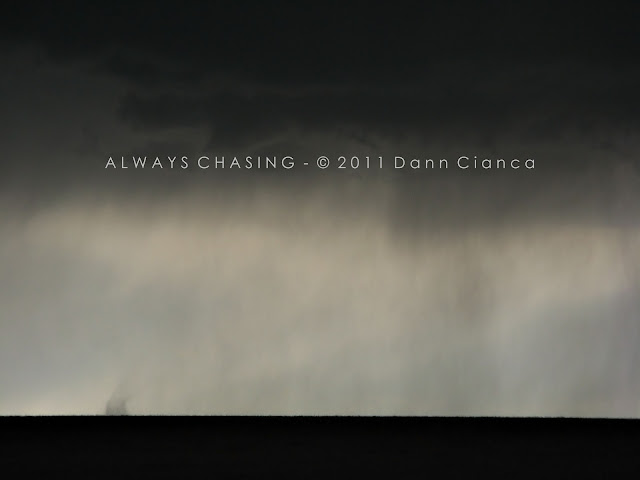 We tried to get a little closer by way of US 36, but the ground circulations dissipated.  The storm seemed to pulse to the north and for a time, looked like it was going to develop a nice wall cloud. 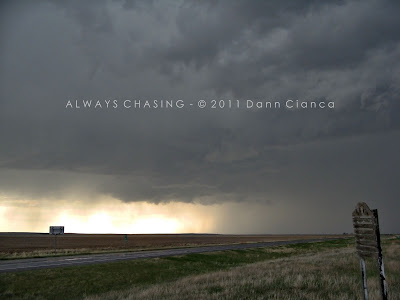 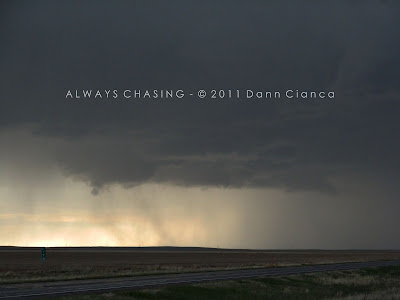 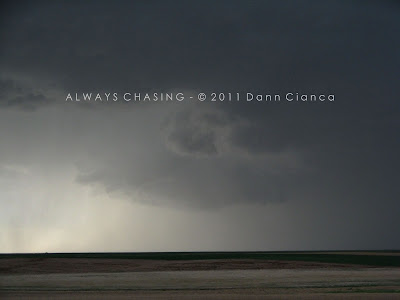 ... but the rear flank came down and soon the wall cloud vanished, leaving us a rather outflowy-looking storm. 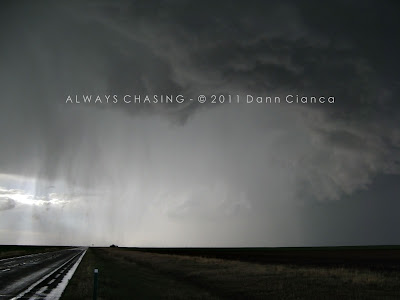 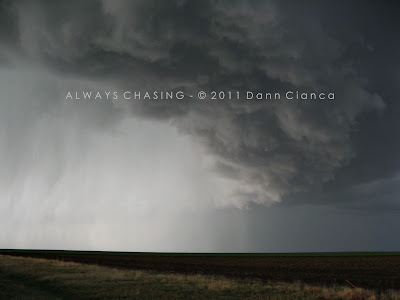 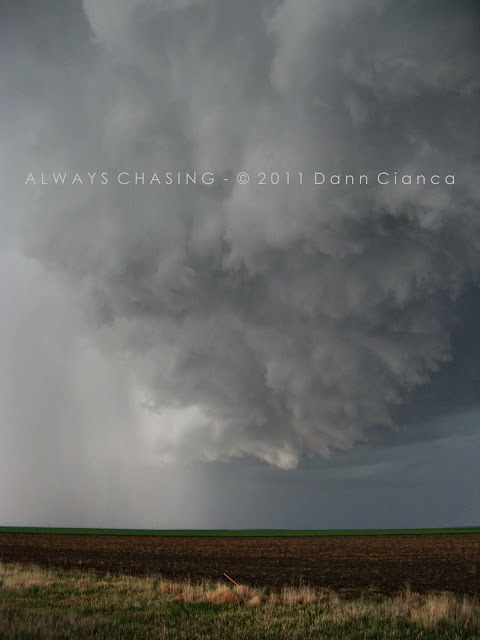 At that point, storms fired southward along the boundary and congealed into a line.  After staring into the turbulence overhead for a while, we broke east once again to get out ahead of it.  There was a storm that had fired ahead of the line to our southeast, so we took aim on that one.

We passed a lightning-ignited fire south of Kirk on our way southward, which I believe Michael Carlson reported and stopped at for a while.

The storm we had eyes on began to line-out as well, so we took a moment to take in the sunset north of Burlington. 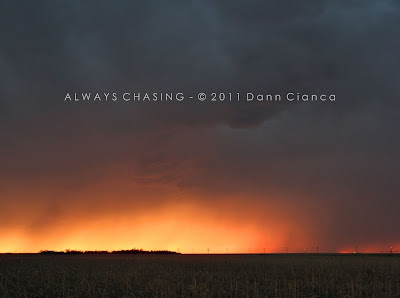 We were satisfied with our chase and opted to head into Burlington to root out some steak.  A few years back, I had ordered steak in Burlington on a chase that did not result in a tornado and I believe this cursed me for a while.  This time, I wanted to break the curse and enjoy a well-earned tornado steak.

Much to our delight, we found The Route Steakhouse to be open and we settled in for big steaks and a big glasses of beer.  Though I couldn't really eat on the left side of my mouth, I was on cloud nine.  It is difficult on many high probability days to realize the goal of seeing a tornado, but on days that have a very low probability, victory is very sweet.

2011 could have been the year that I didn't see a tornado, but thanks to this day, it was not.  I'll concede that the tornadoes we saw weren't very powerful or even photogenic, but you won't hear me complaining at all.

We chatted a bit with several other chasers including John and Shawna Davies.  Even Mark Farnik rolled in after a while.  During our delicious dinner, the storm raged outside.  Hail began to pelt the metal roof, which of course had us all out in the lobby staring, slack-jawed into the night.  The hail was quite soft but some stones were at least an inch in diameter (a nearby spotter report showed 1.75" hail).  I brought a handful of the hail that I scooped from the gutter inside to show everybody.  Mark apparently used it for a drink.  Silly fella'.  Unfortunately, we didn't get to meet up with Tony and Michael as they were off doing other things, but it was still enjoyable, none the less.

We were all quite happy on the way home... especially since it looked like we would get to chase again the next day...

Other chasers' reports for May 17th:
Scott Hammel << Includes video from our vehicle of the tornadoes.
Tony Laubach 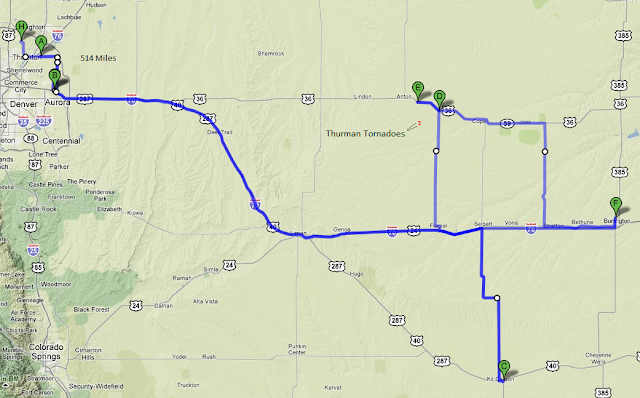