There was a certain amount of relief in my head when I woke up on Wednesday, May 18th. Before the previous day, there was a real possibility that 2011 would be a year in which I would not witness a tornado. Observing a couple of weak tornadoes on May 17th meant that anything else that happened during the year would be a bonus.  When the opportunity presented itself to chase once again the next day, I was quite looking forward to it.

It was a cool day, with a dense overcast as I left my aunt & uncle's place in Thornton to meet my many of my weather friends at Chili's on the east side of Denver.  We all had to laugh at the sign on the door. 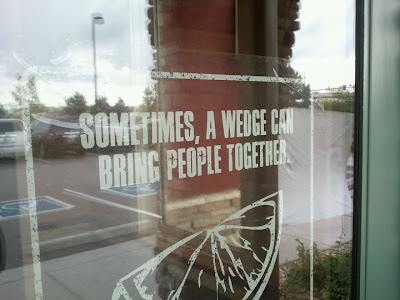 For those of you who are not weathersexuals, a "wedge" is a large, broad tornado.


We had abandoned any plan to make the long-haul down to Oklahoma for the day and decided to stick around on the Front Range and adjacent plains.  The trough was still digging in the west and we were still in an area of favorable upper level support.  While the best activity would likely be to our southeast, I think we were fairly satisfied with our chances close to home for the day. 1630Z SPC Outlook

As we all piled out of Chili's, the skies continued to stay overcast and temperatures hovered in the upper 50s with upper 40s dews.  Any surface reflection of the shortwave that blew through the night before had vanished and the surface returned to pre-upper level trough conditions.  Most of eastern Colorado was experiencing upslope winds, which was leading to the overcast conditions.  Models were firing storms off of the Palmer Divide in the early afternoon, so we figured we would head out a bit east and keep an eye on things.

I joined Scott Hammel and Kendell LaRoche and we set out east, holding at Airpark Road.  I know I've explained this somewhere in my blog before, but it bears repeating.  Airpark Road is the first exit on I-70 east of Denver that is undeveloped.  It was always a place of sanctity for me as the moment you reach Airpark, you have escaped the city and can freely chase storms.  Even being out of Denver for a few months, it still provided that amazing feeling.

Anyway, we were sitting at Airpark and watching the weather closely.  A few showers began to fire on the footies with the deep upslope flow and sun was occasionally breaking through on the plains, so we continued to hang around.

We flew back west into the city on I-70 as a tornado warning was issued.  In an effort to not get too bogged down in traffic and stay ahead of the storm (which was moving just east of due-north), we exited at Tower Road and brought ourselves alongside the couplet where we found a decent wall cloud.  Luckily, we had the Rocky Mountain Arsenal Wildlife Refuge between us and development and that provided an excellent view of the storm. 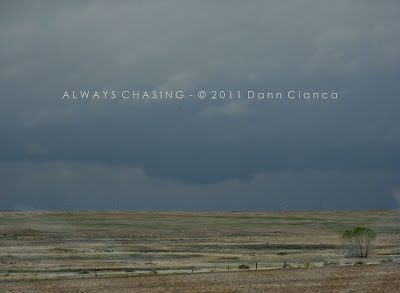 We kept pace with the storm on Tower Road but decided to turn west and get a little closer.  We could see a little rotation from our perspective and it seemed on several occasions as if a cone-shaped funnel was trying to form. 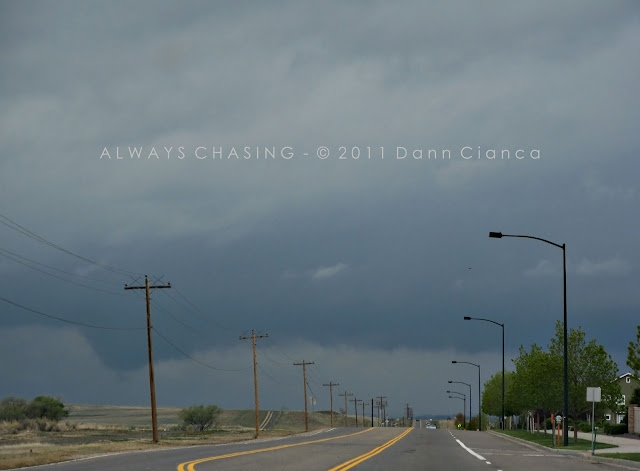 We drove as far west as US 85 and then continued north.  Unfortunately, the storm wasn't looking quite as good (both in person and on radar).  We decided to get out ahead of it and got on the E470, stopping at Colorado Boulevard.  Rain was being thrown out well ahead of the storm as it continued to move to the north.  We lost a little visibility and decided to head back to the southeast where a secondary cell had formed on the fist storm's southeast flank.  We had a good view of it as it continued to move north from Henderson. 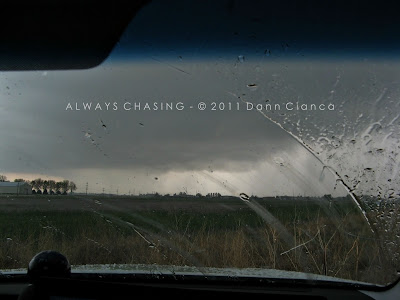 We got into a nice hailstorm in Henderson which we all enjoyed thoroughly.  I think we were starting to feel a little claustrophobic in the city, so we decided to head east and get a better view of everything.  We used 120th for this purpose and met up with Jason Groenhof and tried to stand around outside in the ridiculously cold wind.  SPC's 2PM update (2000Z) actually mentioned the threat of tornadoes for our area, which was a nice touch. 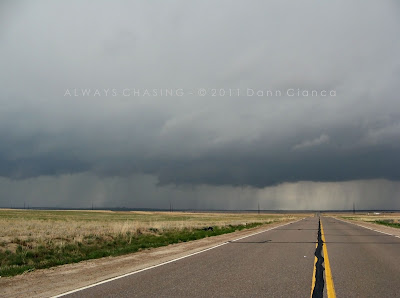 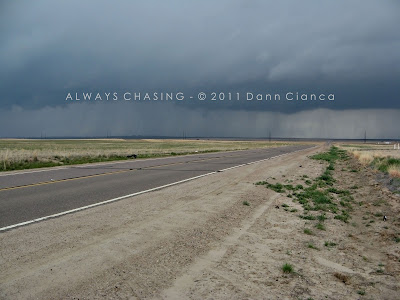 A third cell formed on the southwestern flank of the other two as DCVZ began to push to the east.  This cell had much more of an eastern component to it, so we dropped south to get in front of it.  For a while, it looked pretty good.  In fact, it seemed to have a nice meso, though it wasn't doing much in the lower levels. 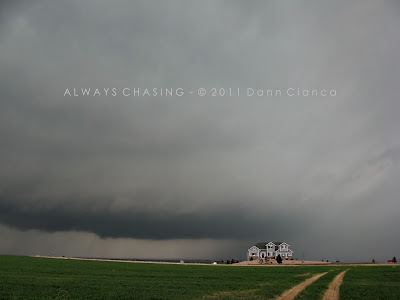 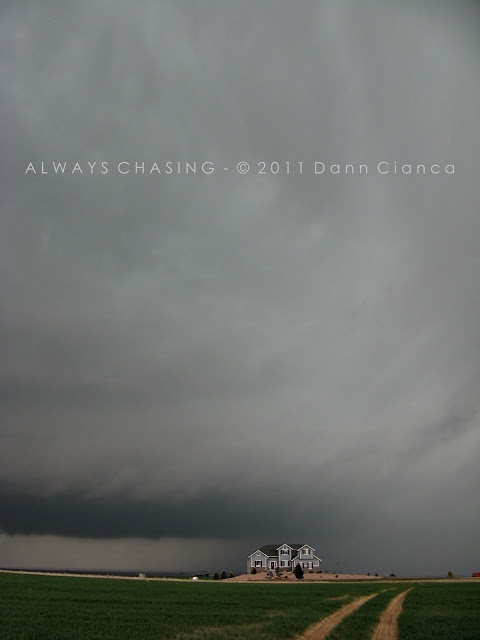 Most impressive mesocyclone of the day, over the airport.

From our vantage, we had a good view of the RFD wrapping completely around and occluding an old meso, which can be seen in the next three images: 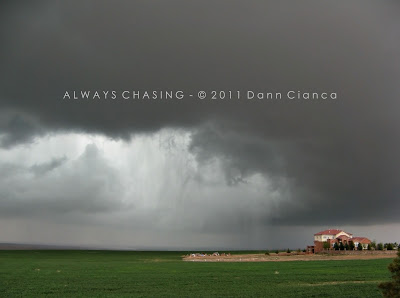 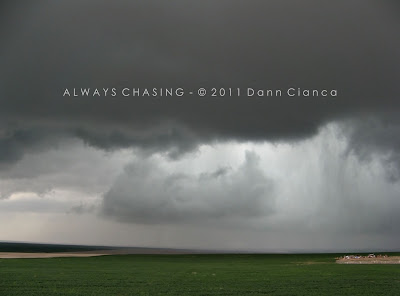 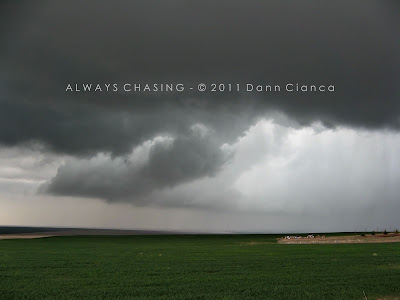 Unfortunately at that point, the show was pretty much over. Everything completely fell apart and we were left with light rain showers.  An isolated supercell did pop down in the Arkansas River Valley and produced a landspout, but that was it for the Colorado show that day.  As far as Oklahoma... where we had thought to chase originally, busted... so we were happy we didn't make the trip.

For the rest of the late afternoon, I spent a little time getting some "b-roll" footage for the report I was going to produce.  I also did quick interviews of Kendell and Scott.  It was kind of fun (but cold) sitting in the back of Jason Burns' pickup truck while Scott followed us on a rainy road.  (Check out the link to my report on the bottom to get an idea of some of the footage we took).

After that it was time to head back to Chili's and head our separate ways.  I met my old roomie and friend Katherine at Olive Garden for dinner, jetted back up to Thornton to talk with my family for a while and then started on the four hour drive back to Grand Junction.  I had elected to go home that night, instead of waking up early in the morning and do it.

I probably should have stayed as I fell asleep at the wheel near New Castle and was startled to "wake up driving"... luckily, in the center of my lane.  It was a rewarding but exhausting couple of days, that's for sure.

If you'd like to watch the segment I produced for our newscast, you can watch it here:  http://www.kjct8.com/video/27959084/index.html

Other chasers' reports for May 18th:
Scott Hammel 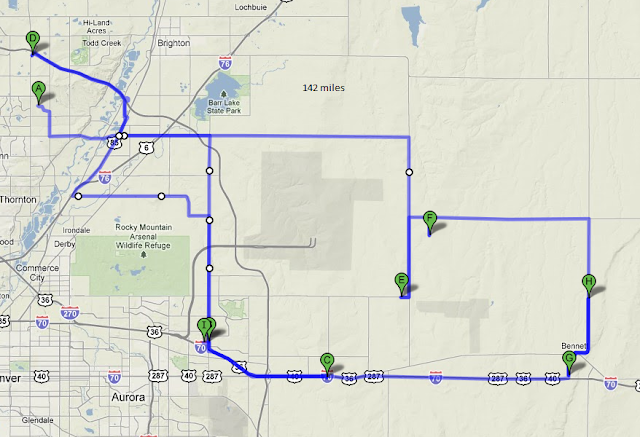