Late on one June evening, I thought I'd head out for a quick hike before dark.  High-based thunderstorms had popped up across the border in Utah and while I wasn't to eager to chase them, I thought I might, at least, get a nice sunset.

I set out with the intent of hiking to Independence Monument via Wedding Canyon.  It's not an officially designated trail, but the park service doesn't discourage its use from what I can tell.  While the days are long(est) in June, I still got a rather late start... hitting the trail at about 7:30PM.

The trail diverges from the Monument Canyon trail not far from the parking lot/trail head and heads northwest along the city-side of The Island before entering Wedding Canyon (named as the place area pioneer John Otto was once married).  Once in the canyon, the trail gains about 500ft in elevation, which is tiring when making haste, especially with temperatures lingering in the low 80s.  Hey, it's a dry heat.

Eventually, you come around a corner and get a view of Independence Monument, which let's face it, is probably the reason the Colorado National Monument even exists.  Call it the centerpiece. 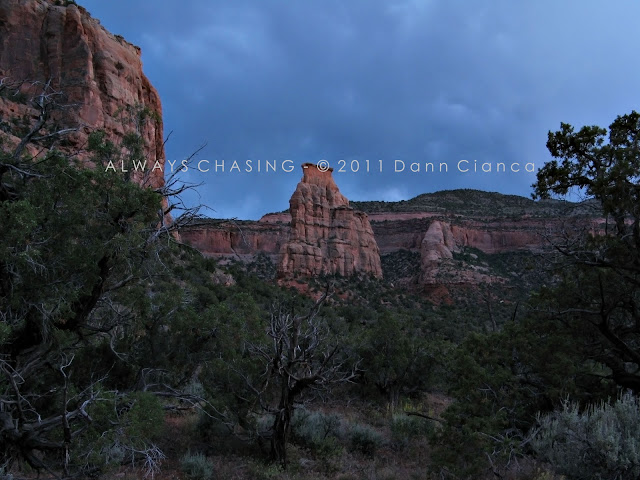 I was hoping for a little sunset color, but skies were obscured with the anvils of the storms out west.  Still, it presented an ominous look to the few images I captured... so I won't complain. 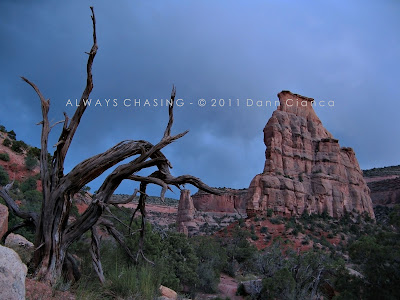 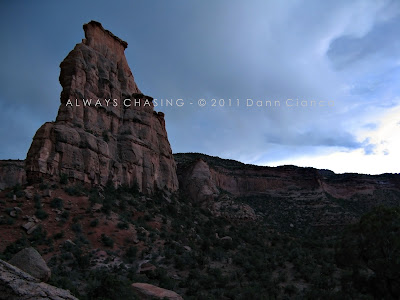 Once I made it to the monument, I lingered for a little while and enjoyed a dry microburst of sorts which kicked up all sorts of sand.  It started getting dark at that point, so I planned to exit the are through Monument Canyon.  Monument Canyon technically splits at Independence Moment and its two exit canyons were once known as the north and south outlets, I believe... as Wedding and Monument respectively.

Darkness quickly followed and the atmosphere relaxed.  I was able to see well thanks to my headlamp.  After quietly passing the "shh, breeding raptors" area, I resumed my purposeful clatter.  One wouldn't want to surprise a lion on a rocky outcrop...

Luckily, I avoided the cougars but did spy something new and interesting in the middle of the trail! 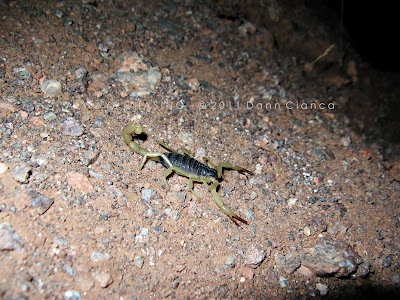 This scorpion, a "northern scorpion", I believe... was only about two inches long.  It remained stationary for a good, long while, so I sat down near it to take its picture.  After trying a couple of angles, it moved and I found myself standing a few steps back without any hesitation.  No reason to get too close...

After that, I left the scorpion alone and continued back out of the canyon and to my vehicle.  The hike clocked in at about 4.3 miles total, so it wasn't too bad, but I did rush.

Not a bad evening to spend outdoors, enjoying the weather and spotting a new creature! 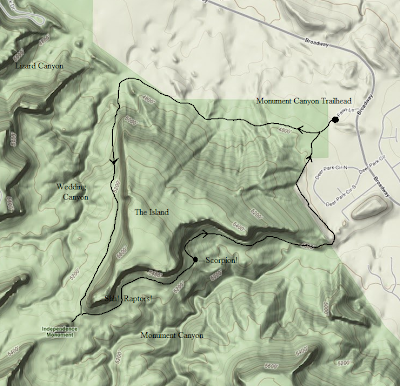