After an afternoon hike in the San Juans (continued from a previous post), me and my friend Ashley returned to Ouray to see the sights and grab a bit to eat.  She had to pick something up that she had ordered when we were there that morning, but then it was on to Box Cañon Falls.  The waterfall is almost synonymous with Ouray itself.  It exists within a deep chasm, eroded into the rock and is known as a box canyon since it would be extremely difficult, if not impossible to navigate all the way through without some sort of heavy equipment.

The area is developed as a city park, which you have to pay to access, but it was only a couple of bucks per person.  A short trail leads from a gift shop to a walkway bolted into the canyon wall.  After successfully smuggling a small creature (see the previous post) in, we headed into the depths of the canyon.  The roar was absolutely amazing. 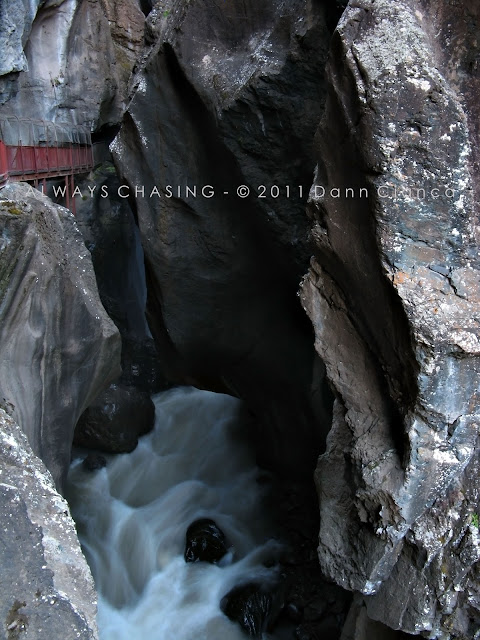 The interesting thing about this waterfall, is that it is almost impossible to view in its entirety... let alone photograph.  In fact, you would be hard pressed to find a good, professional shot online.  I had a hard time with my tripod since the legs were too small for the grates on the metal walkway.  Occasionally, I would find balance and be able to pop off a shot or two. 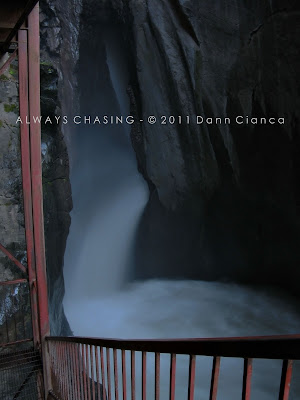 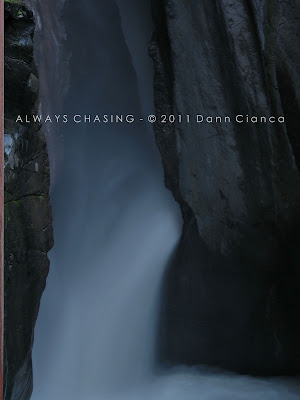 I actually found the exit of the canyon to be a lot more photogenic and the shot below is one of my favorites of all my 2011 photos. 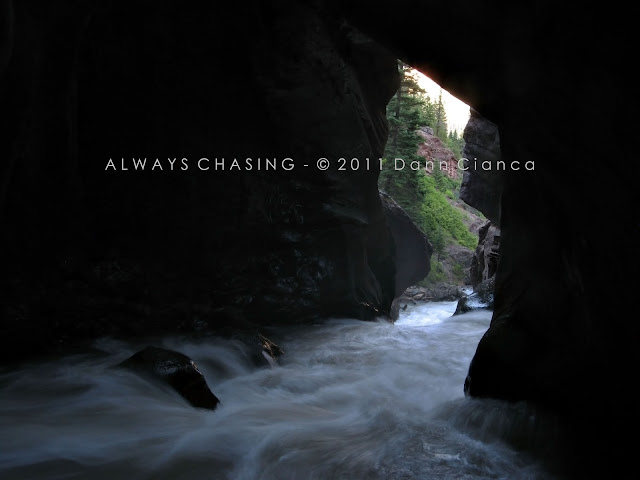 After getting our entrance fee's worth, we decided to head back into town and get some dinner.  The obvious choice was the Ouray Brewery.  We wanted to sit on the roof and had to wait a little while, but were entertained by the swinging bar seats.

Once seated, I enjoyed a well-earned beer sampler and then eventually a half rack of unbelievably delicious ribs.  I was a little stiff from the Gray Copper hike (and the cold water!) but it was extremely relaxing to sit out on a nice summer evening, overlooking this incredible little town.  The beer sampler was also relaxing. 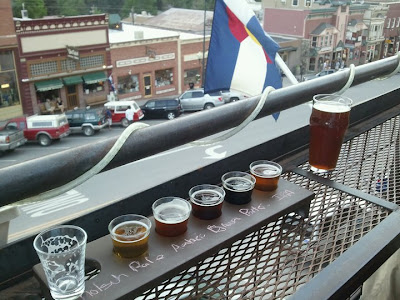 When dinner was over, we weren't quite done yet.  On Ouray's east side, the towering Cascade Falls is hard to miss.  This one didn't really require much of a hike... more like a quarter mile jaunt uphill from the parking lot, which felt ethereal with the beer sampler with me in spirit.

You can see the waterfall well from the town, but not from the trail until you're almost on top of it. 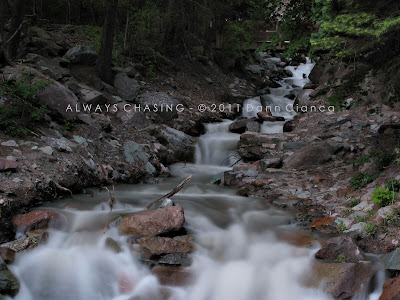 
... but eventually, it comes into view. 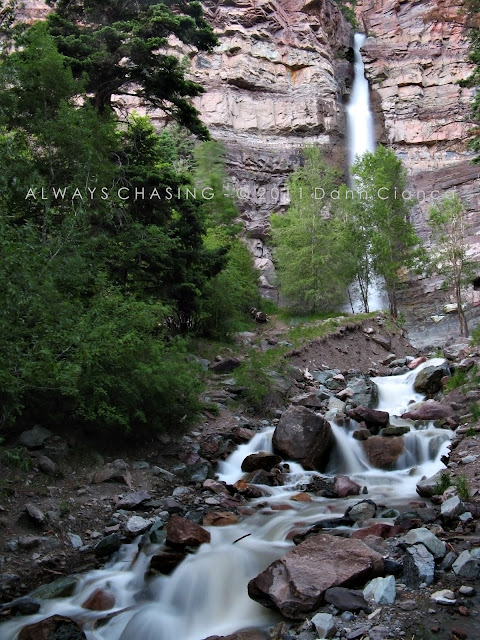 From the base of the falls, a trail heads west, switching back up the cliff.  We found that it afforded us a great view southwest across of Ouray. 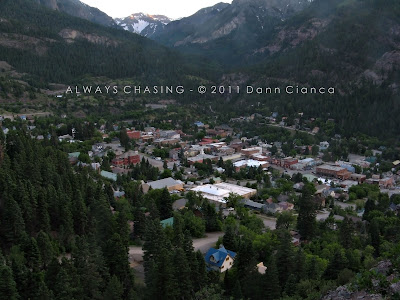 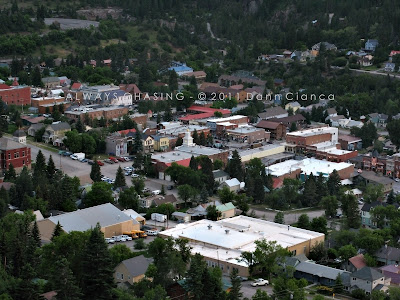 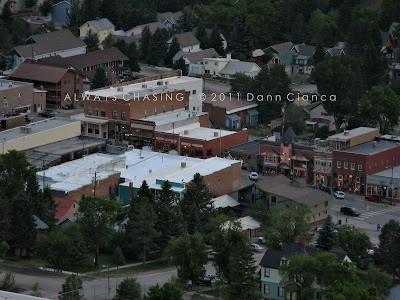 It also heads back to just below the top of the falls, so I stopped there for a while to take a few more pictures. 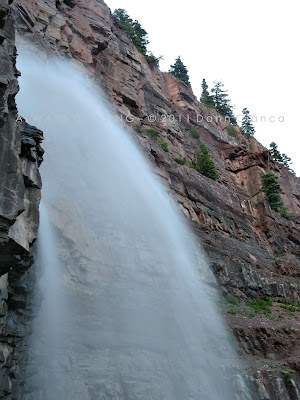 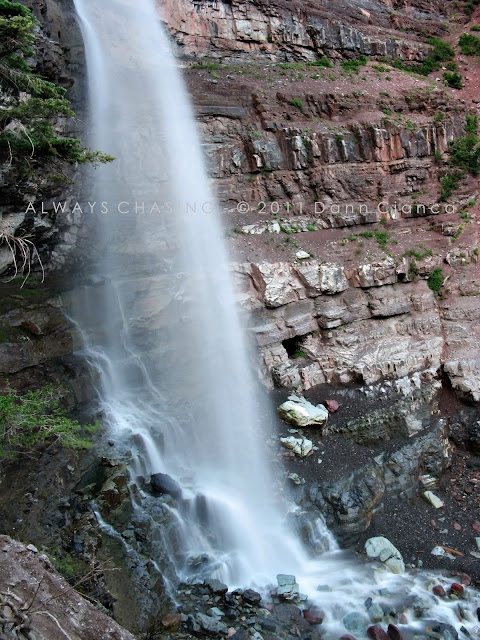 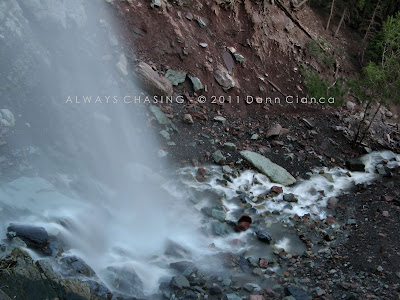 As we worked our way back down, the wind seemed to be swirling a lot, causing the plunge to tilt. 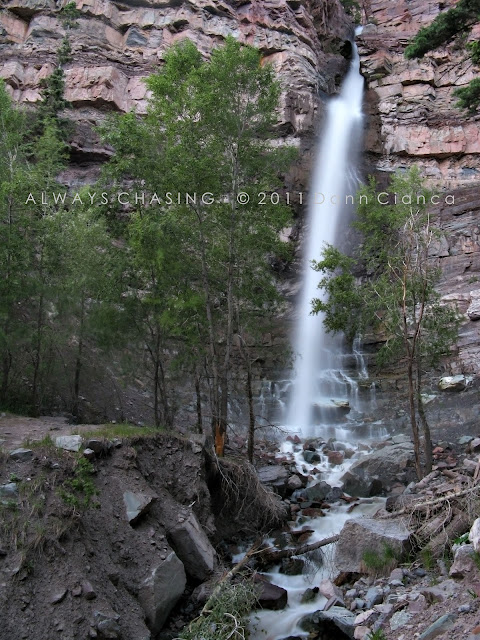 And of course, it was probably too much to ask for a straight waterfall when we got our pictures taken with it. 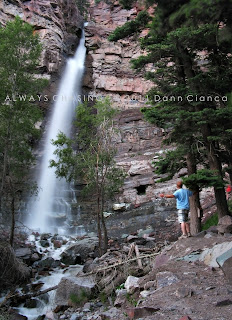 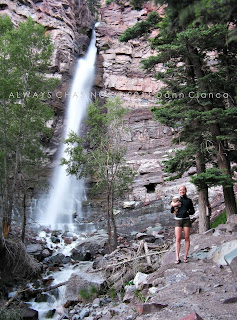 Darkness fell quickly at this point, so we packed up and headed back to Grand Junction; exhausted but definitely pleased with the day's adventures.

Very nice.
Another neat place to add to my long list of stuff you need to take me to see when I come down there :)