I hadn't planned on chasing storms on this particular Tuesday, February the 28th, but somehow it just worked out that way.  I was indeed hoping that something would have happened the day before, but we were still in warm air advection mode, which is not a good place to be on the Western Slope in the late winter if you want convection.  It's simply too warm aloft.  Well, the cold front passed overnight and brought rain to the valleys, which was nice.  However, in the late afternoon as the upper level low was moving through, lapse rates increased dramatically.  Convection began to fire up around the area, complete with lightning strikes.  I left home and went in to work to consult with my colleague Eddie and take a closer look at the data from my work computers.  Here was the general setup:

SPC actually had is in a categorical risk for thunderstorms on that day.  20Z Outlook

As we were sitting there, strong convection began to develop along the northernmost edge of the Uncompahgre Plateau, just south of I-70.  There seemed to be some sort of line of convergence there, perhaps minor troughing in the ULL.  Suddenly, the radar lit up with lightning strikes and even a 0.25" hail marker.  I was quickly on the road and headed northwest.

I planned to head up to I-70 to do a little minesweeping of the core as they passed over the populated portions of the valley near Fruita.  As I reached I-70, however, I looked back to the east to see something that looked a lot more dramatic than it actually was. 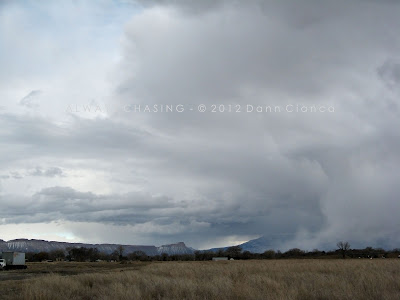 Keep in mind, the view is looking east.  Mid-level inflow to the convection was coming in from the northwest, however, so the bases of the storms were in fact on the north sides of their respective downdrafts.  After a brief photo-op, I got on 70 and headed west to the next exit, then dropped onto US 6/50 which parallels the interstate so that I could have more mobility.

I cored the first cell just to the southeast of Fruita and for the first time in a long, long time, I heard hail on the windshield.  What a glorious sound!

I'm not sure if I have shared my hail scale before, so here it goes:

These were certainly tinks.  In fact, after the first, initial blast of hail, it became soft very fast and definitely more into grauple territory.  I stopped in a pull-out and opened the window, turning the inside of the vehicle into a popcorn machine.  Then, I got out and experienced the core. 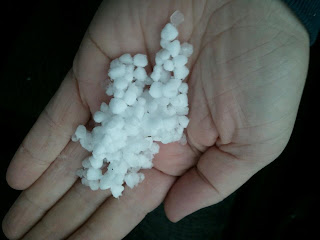 After the initial wave passed through, most of the activity began to fade.  A burst of convection occurred the north, over the desert and I headed toward that initially, but I realized I wasn't going to catch it before it reached the Book Cliffs, so I turned back and decided to re-immerse myself in weaker convection firing along the original line back to the west of Fruita.

Just east of Loma, I got into a nice rain/snow shower with grauple mixed in and found a nice place to stop and enjoy the precip.  It turned out to be reasonably photogenic too. 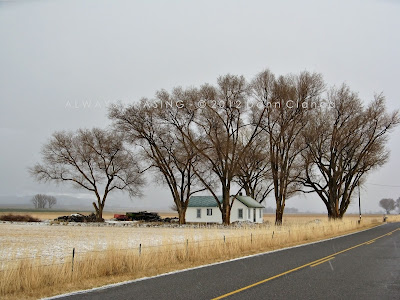 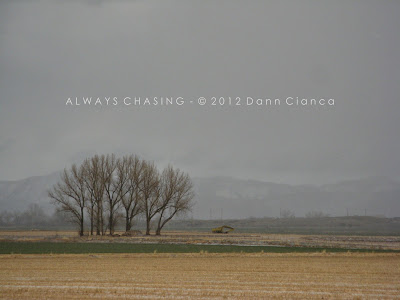 As the storm passed, the sun tried to come out a bit.  This led to a grauplebow.  Boom. 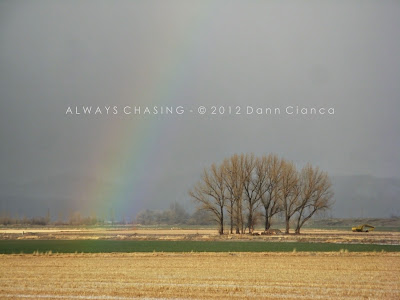 After it cleared, I decided to head north and look for a good position to take advantage of the lighting conditions.  I knew that sunset would soon be approaching, so I explored a bit to find and area worth shooting.

Finally, in full sun, the back side of the departing storms looked absolutely stellar.  There's something about winter convection that is unique and very pleasing to the eye. 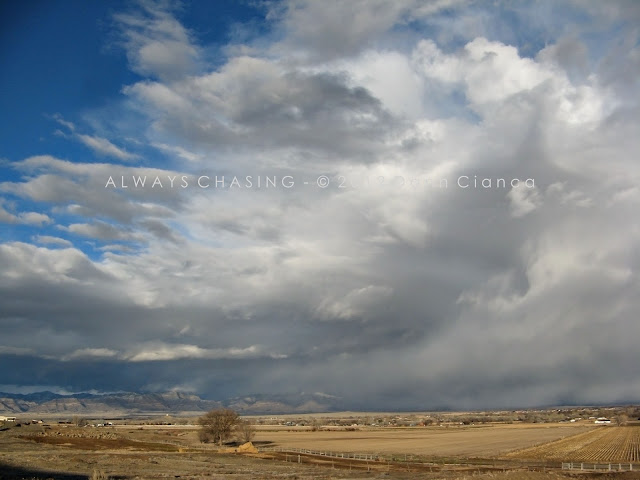 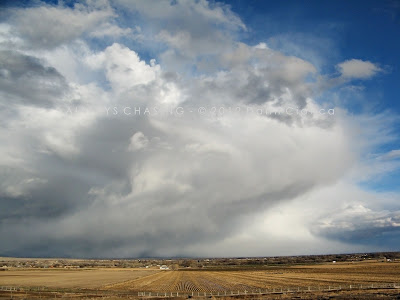 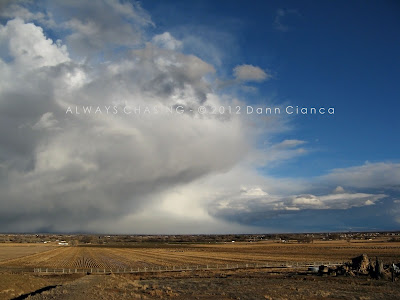 As I reached the periphery of the desert, the Book Cliffs looked fantastic and weak convection was firing off to my northwest again. 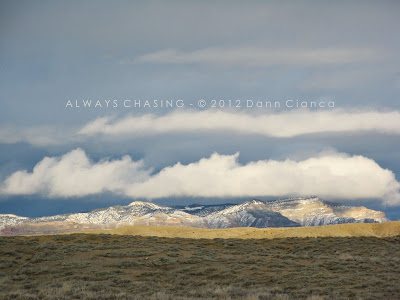 Waves break on the Book Cliffs, freshly painted with grauple and snow. 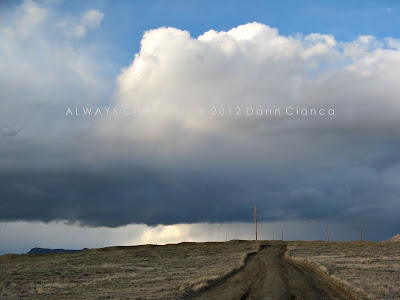 Weak convection north in the desert. 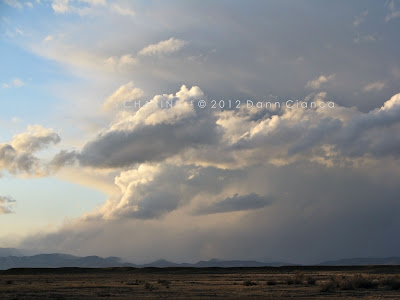 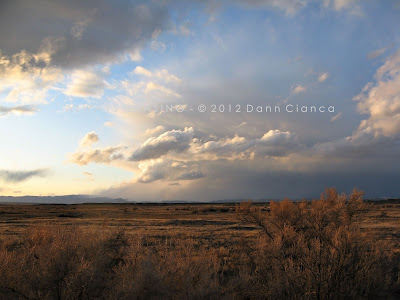 For the actual sunset, I headed back to Loma and stopped just south of the interstate.  A weak shower moving over the Grand Valley turned with the setting sun's light. 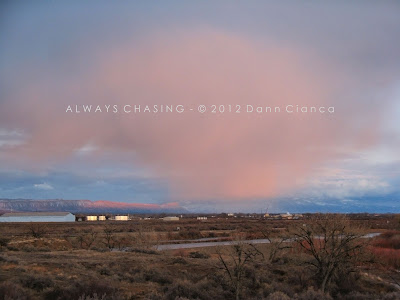 And the clouds out east looked pretty nice too... 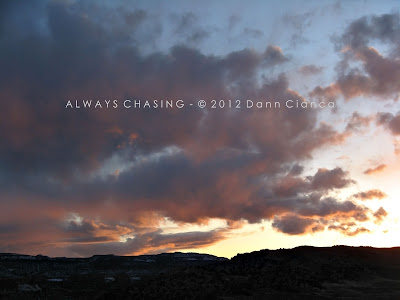 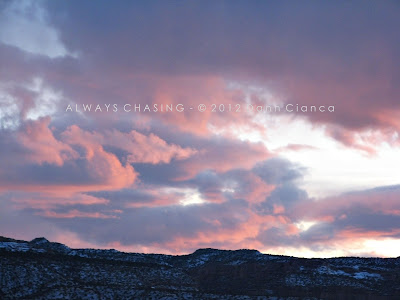 Convection died off with the setting of the sun, so I stopped back at work for a moment before heading home.  Meanwhile in Nebraska, good friends were chasing tornadoes.  But for me, it felt absolutely fantastic to get out and chase something worth chasing.

One crazy note from the day:  The moment I left the station, the lightning stopped.  I did not see lightning nor did I hear thunder.  I swear, though, before I left, it was lit up!  Guess I'll have to wait a while longer for my annual viewing of "Twister".  For those not in the know, I always watch that terribly awesome movie every year after the first time I hear thunder.

Oh yeah, and my good buddies Scott Hammel and Eric Treece spent their day chasing the first tornadoes ever to be recorded in Nebraska in the month of February. 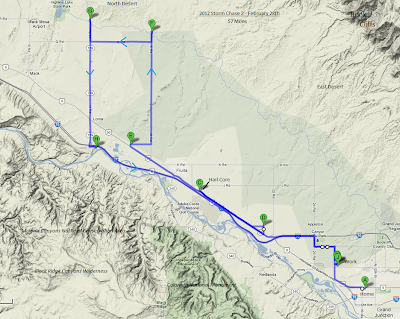