I was at reporting at work on this particular Friday afternoon.  We had been in a Monsoon pattern for a while and that was keeping thunderstorm opportunities more frequent.

I was downtown shooting a story (or attempting to) with my co-worker PJ.  My phone was blowing up with text from Eddie and Drew about storms in the area, which I could see to the west.  I was trying to ignore them to the best of my ability as I couldn't exactly do anything about it.  Winds were whipping through the downtown area as outflow from the storms passed.  The strongest cell was north of town, heading into the desert.

I talked with my boss and he told me I could make a pursuit, so I headed off to the north side of town, cursing traffic in the mean time.  Drew, who was also out chasing, met up with us and jumped in the car.  The storm was on its way out of the valley at this point, but I wanted to see what it had put down since it was carrying a decent amount of reflectivity.

We drove north into the desert, which was fine until we left the gravel road and got into the clay.  PJ and Drew seemed horrified at how the vehicle reacted to the road, but I was used to it and was drifting adeptly in all-wheel drive.  I don't think they've experienced the "cake batter" before.  Long story short, we didn't find any hail, though we did find a golf ball.  It fooled us at first.  Then, it was back to the station empty handed. 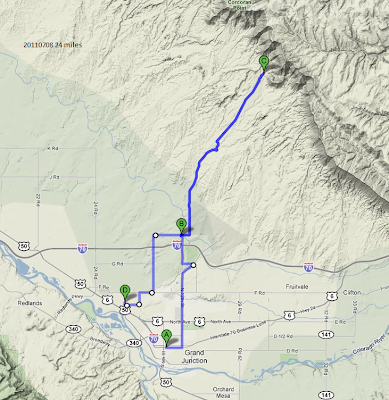 stop bein' a backlogger and catch up! lol.