While researching area waterfalls, I discovered an image supposedly taken of a plunge waterfall on the edge of Grand Mesa.  I had often heard rumors of a significant fall on the Mesa somewhere but had never found any information online.  I decided to comb the satellite imagery on Google Earth and see if I could find it.  Sure enough, I did. 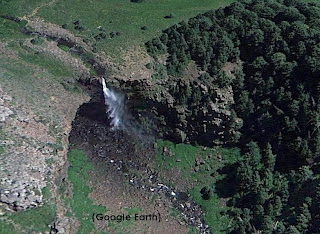 It actually kind of bothered me that I hadn't noticed this before.  After all, I spend a lot of time on Google Earth, pouring over the terrain looking for interesting places to visit.

I had that evening off and without anything better to do than sit at home, pouring over Google Earth, I figured I ought to pay this waterfall a visit.  It was late May when runoff is normally in its prime, so I figured I'd get a good show out of the falls.  They also didn't seem all that difficult to get to.  I had been on a road less than two miles from the falls and there was also sign of a 4x4 road almost to its top.

Normally, one would use Highway 65 to reach the top of the Mesa, but I decided to take Lands End Road, which had recently opened for the season.  Lands End Road is quite the engineering marvel, hewn into the vertical basalt cliffs of the Mesa, built back in the '30s by the Civilian Conservation Corps.

I figured to be on top of the Mesa about a half hour before sunset and to the falls around sunset with a plan to stay until the light held out.

When I got to the top, the view was fantastic.  It had been somewhat windy which put some dust into the atmosphere.  The haze really contrasted the different terrain in the late evening light.

I didn't linger on the edge.  Instead, I made my way to the falls.  The trail off of the main road was a little rough.  It was mostly dry, dusty earth but was occasionally encumbered by chunks of basalt.  Once the road reached the edge of a group of trees, it began to descend and become a bit more rough.

I decided to stow my vehicle in a little pullout and save it from the rocky path ahead, especially since I was so close to the top of the falls.

After a few minutes of walking, I reached the creek and followed it to the edge.  I was disappointed with the amount of water that was flowing.  It had been a dry winter and though I had visited the top of the mesa three weeks later in the year a year prior and found three feet of snow almost everywhere, there was almost no snow to be found except a couple of icy patches deep in the shaded trees.

I looked out over the edge of the falls which were not in plunge-mode due to the low flow.  The wind was picking up the water and spraying me in the face, which was nice, I guess.

I crossed the creek and continued northwest along the ledge so I could have a look at the falls, which had carved a cleft in the cliff over the years.  The color of the rocks, moss & lichens was fantastic but the falls were quite disappointing.  I sat in a small perch for a while and captured images while the light began to fade.


Eventually, it started to get dark, so I returned to the top of the falls.  This turned out to be a good idea as I found a couple of good frames. I also had to try hard not to get my camera wet as I was getting sufficiently misted. 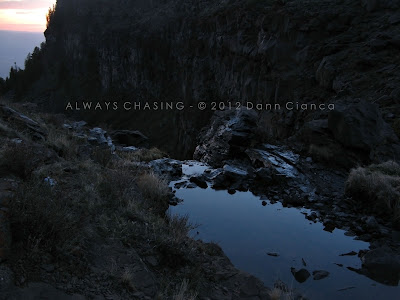 Eventually, it was time to head home.  I started hiking back to my vehicle and sort of got lost.  Apparently, there was more than one road and the one I was following was not the one I came in on.  Once I reached the open space beyond the trees, I was able to reorient myself, but snapped a picture of the valley first.


Once in the vehicle, I returned to Lands End and captured the rest of the light on this windy night.

Existing clouds drifted and uncovered the crescent moon.  The earthshine on the dark side was incredible! 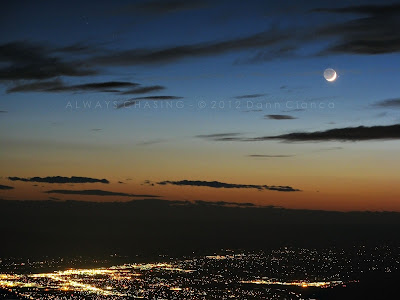 And then Venus showed her face!

Despite the lack of a decent waterfall, it was an amazingly beautiful and relaxing night.