Last night at 8PM (MDT), the temperature outside my apartment was 20ºF. Two hours later, it was 36ºF (10PM). While KAPA had been in the 30's all afternoon and into the evening, other stations such as KBKF and KDEN were still inverted. I had made pleas to the universe in general yesterday to have the southwesterlies break the inversion just for a spell. For a brief period last night, they did just that. It was down in the 20's again this morning when I awoke.

We had a brief burst of snow here near Centennial Airport today. I did see some cumulus this afternoon which made apparent the instability today. It made me think of much warmer times ...

Speaking of warmer times, I'm keeping my eyes on the trough portrayed by the models that should plow its way through the south this coming weekend. The models aren't quite lined up yet and vary a little run to run, so I'm not going to call anything yet. Indications are that the Gulf of Mexico will open up, though.

Here's a look at the CAPE on the WRF 84hr. (Friday evening) 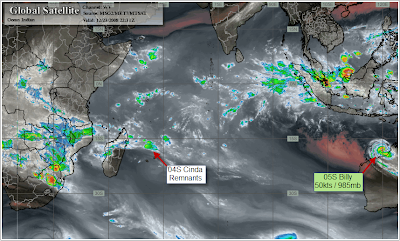 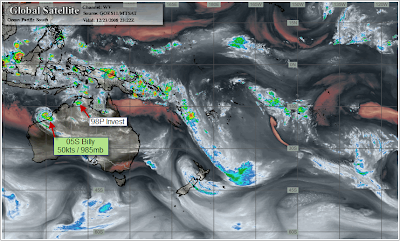 Looks like Billy might make a name for himself. After an initial landfall in Australia, he's emerging out into favorable strengthening conditions. We'll have to keep an eye on him.

And finally, a nice tornadic storm is caught on camera in Australia:
Link to large picture.
Discussion on The Australian Severe Weather forum.
Canberra Times article.