To Wrestle The Wind

I'm back in Colorful Colorado. My trip to Montana was great. We had at least four different dendritic snowfall events including one on Christmas Day (talk about a "white" Christmas!)

Travel could have been a lot worse. On the way up, I only had to contend with wind in Wyoming (north of Cheyenne) and then again near Livingston, Montana (with blowing snow). The passes in south central Montana were snow packed but not icy. On the way back to Colorado, the snow ended in Butte just as I was leaving. The sun came out and made Homestake Pass slushy, but not slippery. The roads were dry after that and I only dealt with insane wind once south of Buffalo, Wyoming. Checking obs along the path, I was battling 30-50mph crosswinds at times! No wonder my arms are sore. There wasn't any blowing snow in Wyoming ... just blowing dust. It was very hard to see at times.

When I left Denver, it was cold. We had been battling inversions for almost the entire month of December. When I pulled up at my apartment this evening, the temperature was 55ºF with stiff southwesterly winds. Finally, some of the snow has had a chance to melt.


Anyway, that about wraps up the weather side of things. I took a lot of pictures but haven't had much time since being home (only an hour now) and really haven't gone through them. So, I'll share my favorite one since it came out well and I don't really have to do anything save for slapping a watermark on. 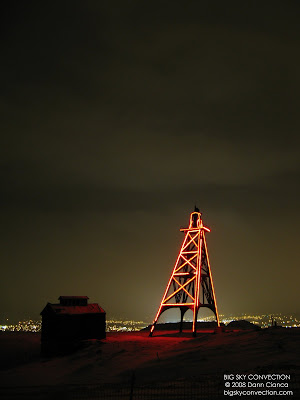