Well, it's getting a little chilly here again tonight in Denver. As it stands, it's 16ºF with a light breeze at my apartment. The sun was out most of the day, but it never really got much above 30ºF. While that doesn't seem all that cold, the wind sure had a knack for cutting right through me.

Montana is seeing very cold weather again. Temperatures dropped below -20ºF in many locales yesterday and have returned that low already tonight. The GFS and WRF did not show the quick drop in temperature tonight for the area. I wonder if they are having trouble with the timing of the system in the northwest. The warming in Montana just doesn't seem to have begun just yet. In fact, there are some readings below -25ºF currently and even one (Kevin, MT) at -31ºF.

Last night (Friday, the 19th) was the third installment of Convergence! The AMS Club at Metro State was kind enough to host the event and it took a slightly different turn than normal. Instead of just hanging out at the bar and swapping stories, we had a forum to share media. It was a lot of fun (-beer).

I was asked to fill some time so I did a presentation on the Alta Vista Tornado. More specifically, I wanted to talk about how sometimes storm chasing is just about going out and working with what you have. It seems like a lot of attention is paid to the moderate to high risk events. Well, in this case, we saw something happen one day, saw the same pattern the next day, and got lucky. I also wanted to show people that a non-traditional storm (in this case, a VERY LP-supercell) can still tornado under the right circumstances. I tried to cover this as best I could given the documentation that I had. However, my power-point presentation did not make it to the event intact. Unfortunately, I only linked the diagrams and pictures instead of inserting them. So, of course, nothing showed up. Luckily, I was able to talk my way through with some stuff I had uploaded to the infobahn and a couple secondary things that I had remembered to bring. Hopefully people enjoyed the talk.

Tony Laubach was up next and he presented the May 29th chapter of his latest chasing DVD. I had already seen it, so I knew what to expect (though thoroughly enjoyed it for the third time!), but it was cool to hear the oohs and ahhs from the audience.

Next up, we got to see some of the May 22nd chapter of the latest Carlson Chasers DVD. I had seen some bits and pieces before but it was nice to see the full presentation. I still need to pick up a copy of their DVD.

Cameron Redwine then wowed us with some slide of his storm photography. He doesn't have much material online or I'd link him, but he has some fantastic shots. He's been chasing in Colorado since 1997 and has documented completely with use of a film camera. It definitely gave me an appreciation for the film quality.

Kendall LaRoche was next and he showed some pictures of his front porch storm spotting, which was cool. I had the pleasure of bringing him along on his very first storm chase back in April. You should have seen his face the first time we saw lightning on that particular day.

Finally, Dr. Richard Wagner (from Metro State) did a presentation of below-zero climatology for Denver and finished it up by talking El Niño and La Niña trends here.

There were some new faces there, which was nice. Some of them were chasers and some of them not. All in all, it was a fun night.

The next event is tentatively scheduled for Saturday, January 31st.


A couple days ago, I promised some shots from our grauple/thundersnow event. Though I didn't hear thunder, there were several reports in the metro along with some lightning strikes showing up.


I've enjoyed putting the information on the tropics in my posts for the past week. For some reason, the last couple years have seen me more excited about the Southern Hemisphere season than the more "local" events. I guess if you're reading this, let me know if you like seeing the tropical weather on here. 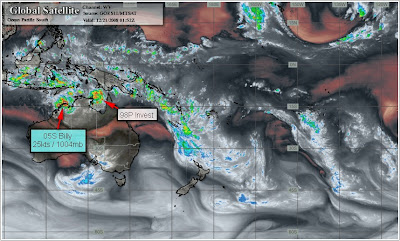 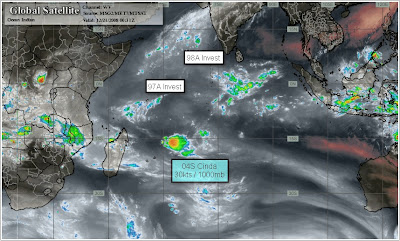 And finally, Michael Carlson posted this link on Storm Track recently. I figured I'd share it as well.

Thanks Dann. I really liked your presentation and congrats on the tornado. Nice grauple photos too.