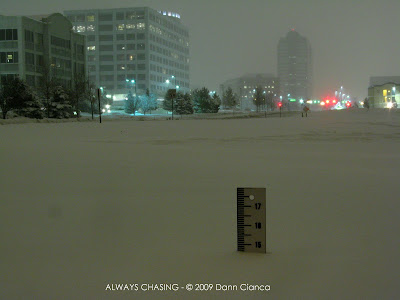 Don't feel so bad, GXY only got 10" or so. Cheyenne Ridge downsloping was a killer for us. There were times that moderate to heavy snow was over us on radar, yet it was only snowing very lightly. The low levels were just too dry u out here. It was a fun long-duration light snow event for me though. Hey, BTW I noticed my blog RSS link on your site is still named the default name and not "Storm Talk". Is that something on my or your end that needs to be changed? Im also working on adding a links list to my blog and will be adding your link.

I am glad we have not gotten any flakes here (MI) as of yet. Whats the latest on the snow forecast for your area?

And the show continues for Colorado!
What a year for weather watching around there, wow.
Glad somebody is getting some interesting weather :)

hello, you blog is amazing, i like you blog, nice capture of storm... regards from Argentina...
http://tiemposurdesantafe.blogspot.com/

Sorry to you all for my delay on responding. I'm incredulously behind on e-mail at the moment.

Matt: I'll have a look at the link.

Kurt: Typically in El Niño years, we have active falls and springs, but the winter is tame. So far it's living up to that hype.

David: Thank you very much!