Much discussion lead up to this chase. The basic synoptic setup was this:

-Slow moving upper level trough over the Rockies.
-Quasi-stationary boundary stretched from NW Kansas into Iowa.
-Dryline along the I-35 corridor

Okay, so the big problem here was capping. I was wrought with confusion as to how the operational models (NAM&GFS) had high CAPE values and in some areas little to no CINH, but was not breaking out any precipitation. Leading into the event, this was by far my biggest concern. Even the 4.0kmWRF was giving us nothing.

So, myself, Tony Laubach, Scott Hammel, and Ben Carr set out from Englewood, Colorado at 5AM, Monday morning. All of us were in good spirits and as things tend to happen, we got a little silly.

The constant bombardment of fan/friend requests on Facebook from "storm chasing teams" spurred me to come up with a mock chase team name for us, complete with awesome nick-names. So, for the trip, we were:

Let's just say there's some humorous video... which I may release eventually.

Anyway, back to the chase. Initially, we were undecided as to whether to play the dryline or head into NE Kansas (or possibly SE Nebraska, SW Iowa, and NW Missouri) to play the warm front.

SPC had been wobbling with the dryline setup, even taking away general thunderstorm probabilities the day before. However, the night before, the area was upgraded to a "SEE TEXT" and that morning, it was up to "SLIGHT". Interestingly, what I saw in the models hadn't changed. I was really hoping that they saw something I didn't and thus lead to higher probability of severe.

With a little encouragement from the official forecasts, we settled on the dryline. As we approached Salina on I-70, we hit moisture. It felt good to be on the other side of the line again... and it was hot. We stopped in Salina to do some makeshift revisions to Scott's rig which lead us from a truck stop to a WalStarMart to an O'Reilly's Auto Parts store. Eventually satisfied with the modifications, we stopped at Chilli's for lunch. Definitely not being used to the heat and humidity, I was in "hydrate-mode" and quickly sucked down three strawberry lemonades. I also learned that if you order in a fake Australian accent, you may not get what you wanted. Scott learned that if he orders the same thing as the person next to him, he should make sure that person didn't order in a fake Australian accent. We both ended up with matching salads. They were tasty enough.

The southwesterlies ate way at the moisture and soon Salina was dry. Looking at the RUC and observed surface data, we decided to make our way further south, probably west of Wichita. The dryline began to retrograde further south, which gave us some hope we would see some initiation in the late afternoon.

At McPherson, we stopped for gas and all laughed at a gas station marquee which read:

I was later informed that "TORNADOS" are "Mexican treats"

Anyway, we were back on the road, southwest-bound for Hutchinson. We stopped just south of town and kind of hung out. The winds were beginning to back *slightly*. I'm talking about 175º here. Temperatures were in the 80's and dewpoints were in the low 60's.

We continued to adjust south and west and suddenly SPC issued a mesoscale discussion...

There was hope! Right?

As it turns out, this was just another tease. There were a few tiny little baby clouds under CAPZILLA but nothing did anything. 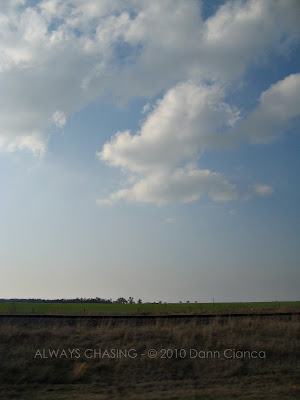 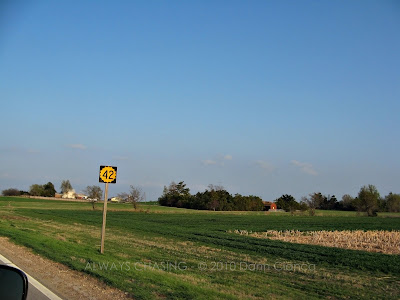 Eventually, we found ourselves just south of Medicine Lodge and running into a few other chasers (Connor McCrorey, Aaron Estman, Jake Wallentine, and Kevin Rider where we just hung around and goofed off, acting bitter about what had become a blue-sky bust. 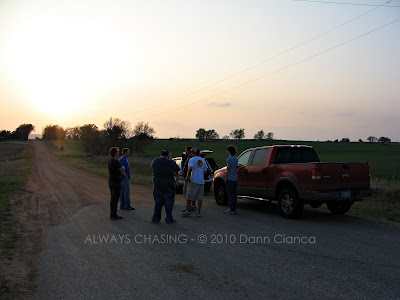 As we were sitting there, storms blew up in NE Kansas, well out of our reach. None of them went tornadic, but it was still a bit of salt in the wounds.

We (our group and Connor and Aaron) admitted defeat and had some dinner at the Pizza Hut in Medicine Lodge. I spent extra time in the bathroom washing the "hot and humid" off of my face. The wind was pretty constant at about 20 knots, which seemed to deposit grime on me. I felt gross.

We briefly speculated about sticking around for the night and chasing the next day, but I had to be at work at 9AM on Tuesday and was not looking forward to another possible cap bust, so we hit the road home.

We stopped south of Russell to get out and have a look at the sky given reports of aurora up in Minnesota. The sky was beautiful but due to our latitude and the moisture haze, I couldn't resolve anything aside from a lightning flash to our very distant northeast.

I also witnessed a spectacular meteor which streaked and flashed a couple of times before disappearing above the ground. I have seen three such meteors late at night on the way back from chases... I almost expect them now.

Nine hours and tons of tired humor later, we were rolling back into Denver... where it was raining. We made it back to Scott's house and quickly unloaded. As I got in my car, almost exactly twenty four hours after arriving the previous morning, I felt as if in a dream-like state. I went home and went right to bed and strangely, it felt like I had just got up. It was like I had driven to Scott's house and back in the middle of the night and just went back to bed. The whole thing was kind of weird.

Maybe this was a symptom of defeat from Bustzilla. 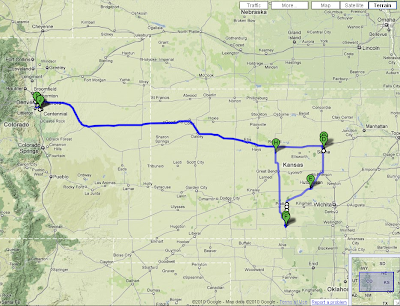 That video must be released at some point! Hahaha, oh man what a trip that was. Oh and remember when you asked if my car was making a weird noise? Yeah, not grooved pavement, rather completely disintegrated wheel bearings on both my front wheels. Yuup, $650 later, she'll be back for Sunday!

Yikes! That was spendy!!