Synoptics: Cut-off upper level low over central California. Plenty of moisture being picked up in the mid-levels and spat out through the central Rockies. A few waves moved through and it looked like we'd have a night-time one roll through, so I headed out the door with a desire to shoot some lightning.

I could see plenty of flashes in the mountains as I left my apartment and took Quebec south to C-470. I wanted to get out early enough to find a good perch to see the storms as they moved off the mountains and my preliminary target was the Chatfield Reservoir area.

When I found a nice area with a view, I set up shop and popped off a few shots. The lightning was still too distant to for my point-and-shoot do make anything presentable of, so I just kind of hung out. I kept hearing pulses and crackles move through the power lines overhead which seemed unrelated to the electrical storm activity in the mountains.

I had been texting with Sean Mullins and was a little restless, so I decided to go meet up with him on the west side of town. I figured I had enough time to resposition as the storms still seemed fairly deep in the mountains. So, I hit C-470 with the intent on meeting him at the Alameda exit. Unfortunately, the line of storms pulsed forward and by the time I got to Alameda, I was already in precip. I pulled off the road there and a few nice bolts struck around me but I wasn't able to get out and shoot. I decided to continue east into the city (Lakewood) and find a place that I could shoot from. On top of everything else, my vehicle is not 100% which made driving around frustrating. This added to the frustration of not being in position when the storms emerged from the mountains.

I decided to try and set up my tripod in the car and get some shots that way. I barely missed two nice bolts as I set up (I can only do 15 second exposures on my camera) and ended up with empty frames, such as this: 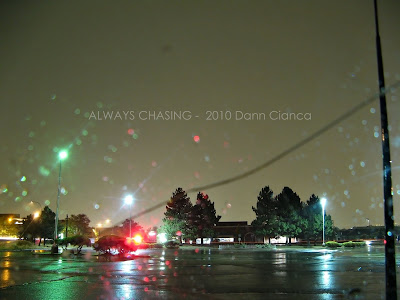 Just imagine a vivid cloud-to-ground strike in the middle of the frame.

I repositioned again near the Union exit along the 6th Avenue Freeway where I had a bit of an overlook. There seemed to be some decent activity to the north and though I probably drove around the parking lots too much looking for the perfect position (and thus outlasted the rain), I finally settled in, frustrated and started taking some pictures. While my camera was saving a file (as opposed to being "open"), I saw a brilliant C2G and subsequent substation/transformer explosion. I knew that Tony Laubach was up in that area, so I texted him and asked if he had seen it. He had... and he was close.

Anyway, I kept shooting until 1AM or so and only manged one bolt in frame. 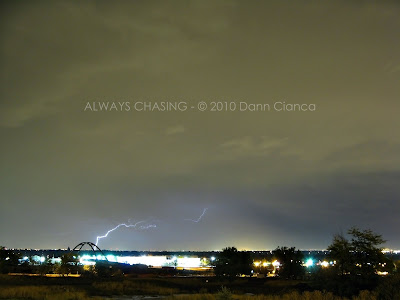 Had a decent view of downtown from this location, which was basically just west of the Denver Federal Center. 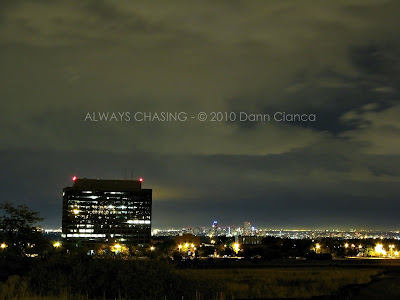 Eventually, I made my way home and was a little worried, realizing that I had left my windows open, but apparently the storms moved just to the north. Luckily, I got to sleep in a dry bed.

Somewhere along the line, probably at Chatfield, I got into some goatheads... and let's just say I ended up with some bloody fingers. My shoes were covered in them! 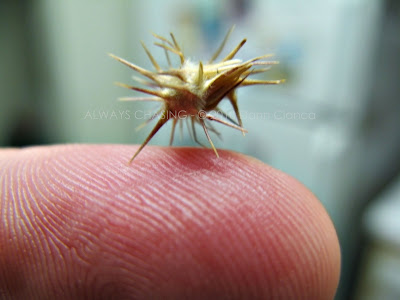 I probably should have stayed at Chatfield, goatheads and all.

STATS
Mileage: 68
(Year-to-date): 17720
No severe weather reported or observed in the area.

Other reports on the date:
Tony Laubach 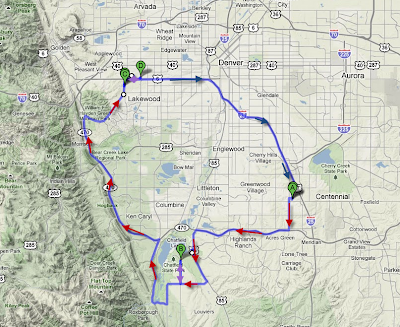