I was out on an evening walk a few weeks ago and discovered that the Museum Of Outdoor Arts at Samson Park which is located only a couple blocks from my apartment, stays open overnight. I walked through the park (a relatively small space) a couple of times and always thought it would be fun to bring my camera and take a few pictures.

When I bought my camera, a point-and-shoot Canon in 2007, it was mostly to have for storm chasing and the occasional visit to a national park. I've always enjoyed a very amateurish type of photography but still haven't advanced myself with a "big kid camera". Sometimes I feel a little silly out some place with a tripod and a point-and-shoot camera, but given the wide breadth of my hobby spectrum, I have to spread my funds around, and rather thin. Over the last few years, a vehicle that gets 16 miles per gallon on the highway and a propensity for me to chase any storm that moves are two reasons why a lot of my available capital has gone into the gas pump. However, I do believe that half of the effort of taking a picture is being in the right place anyway, and I've certainly found myself there a few times this year. This has resulted in a couple of print sales and inclusion of two of my photos in a calendar.

With that said, please bear with the fact that I still do consider myself quite amateur. I don't plaster watermarks all over my photos because I feel my photos are some elite work of art, I just get annoyed at the folks who complain about their photos being stolen. I've never had to post in the "copyright infringement" thread on Storm Track. I have also reached, in most cases, the limitations of my camera. It is for this reason that I will go into Photoshop and tweak some of my images... sharpening, contrast, brightness & saturation being the usual changes. On some occasions, I do this to enhance a low-light image to bring forth features that aren't apparent (you'll see some of this in the post below). In other cases, I'm trying to recreate what I saw with my own eyes and was unable to capture as eloquently with my camera.

So why am I bothering with this whole "explanation"? Well, I have a favor to ask. Beauty is in the eye of the beholder, it is well known. I've noticed that with a few colleagues (who are actually getting paid to be photojournalists), that in one case, every photo they produce is underexposed. With another, most photos are obviously (to my eye) highly sharpened at a large radius and the colors are extremely skewed. If you see something similar with the photos that I often produce, will you let me know? Sometimes things look good to my eyes, but for many others perhaps not... I would appreciate it.


Enough of that, now. Last Friday, I decided to grab my camera and head out to take some photos. I planned on taking some silly ones as well. I had no idea what an interesting night was about to take place!

Many of the pieces at the MOA have an Alice in Wonderland theme... 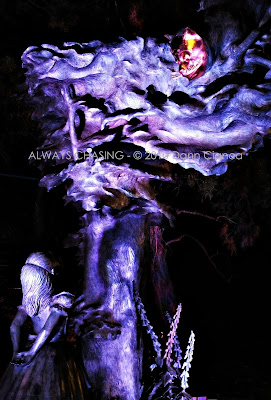 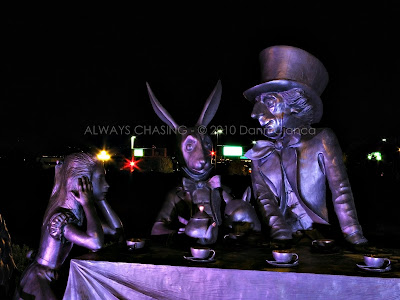 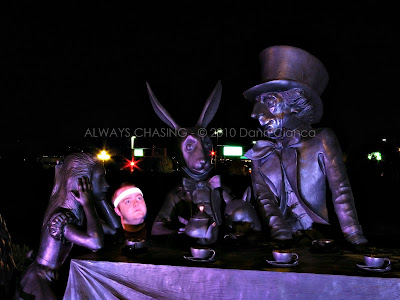 I did mention I wanted to take a few silly pictures, right? 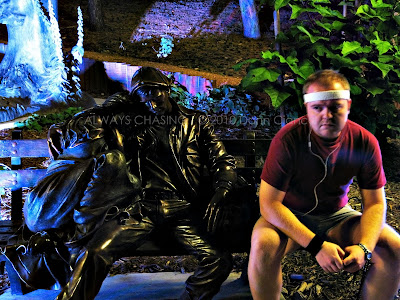 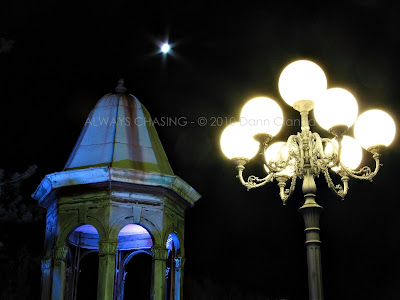 A very interesting part of the museum is the Weidenblume which is a type of living willow sculpture. Basically, branches of a willow are bound together and put into a form. I'm not sure if the willow is grown on site or if the binding allows the willow to regenerate, but in any fashion, the willow is alive and growing. More information can be found here: Weidenblume.

*Please note that the long exposures and enhancement make the landscape appear much more bright than it actually was. 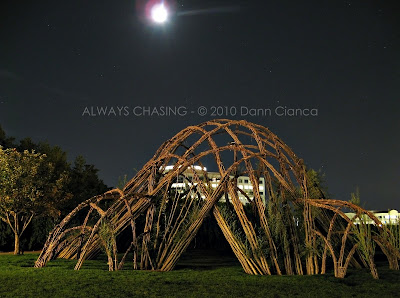 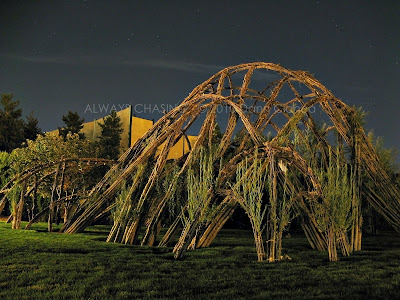 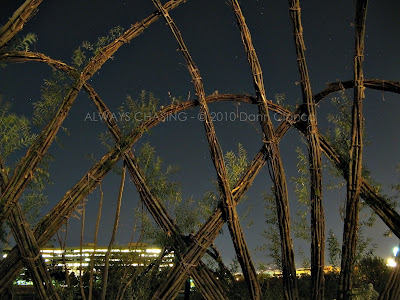 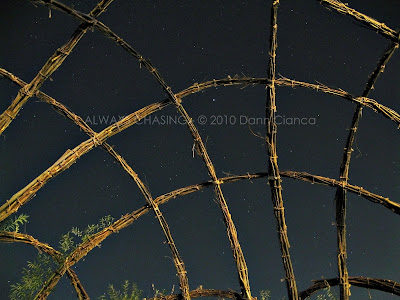 While taking picture from the inside and outside of the Weidenblume, a pack of cougars approached me. That statement is made to be taken figuratively. They all seemed to be three sheets to the wind and one was celebrating a birthday and complained to me about her husband all while apologizing for getting in the way of my pictures. They weren't really bothering me, however and quickly moved along anyway. As they were leaving, I told them to be careful of coyotes (literally) as I had seen them in the area on previous occasion.

Just after they left, I was inside the Weidenblume and looking out across the sidewalk to a wrought-iron gate that led into the Fiddlers Green (now Comfort Dental) amphitheater. I'm not sure why I was looking there, but moments later a creature emerged from behind the tall hedge and poked its head through the gate, not ten feet from where I stood, shadowed in the Weidenblume. At first, I thought it was a fox but as it emerged from the gate, I realized that it was a small coyote.

"That probably isn't a good idea," I said to the animal, thinking that it didn't know that I was there in the shadows. It noticed me but paid me no bother, walking around the Weidenblume to my right. I honestly found myself annoyed that it didn't seem scared of me, so I told it to leave and clapped my hands a couple of times. It just stared at me, though it was now away from any of the outdoor lights in the park. I could see its outline about fifteen feet away between a couple of large rocks. I figured if it was going to stand there, I was going to take a picture of it, so I moved my tripod and lined up my camera. I looked up at the coyote and then back down to the viewfinder to make sure I was set. When I looked back up again, it was gone. I poked my head outside of the Weidenblume but could see no sign of it. I paused for a few moments to listen... and nothing. A moment later, I was startled by movement back at the gate only to see a large rabbit hop through. "That probably isn't a good idea," I said to the animal.

I had lost the coyote however and I felt a little unnerved about it. Sure, it was a small animal and generally coyotes tend to stay away from humans, but I didn't like that I didn't know where it was. I trudged around in the darkness of the west side of the museum grounds but aside from a strange-sounding splash in the pound, I neither saw nor heard anything.

The moon was fairly bright that evening, so I took a moment to take a picture of a sculpture that was moving softly in the light wind, backlit by the moon. 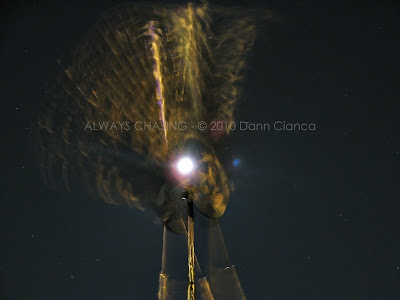 From the west, a sudden commotion filled the wind. It started as one but grew to many. I was suddenly aware that there was more than one coyote nearby as several began to howl and yip. Imagine how strange this sound was as it echoed off of the nearby office towers, all abandoned for the evening. This area of Greenwood Village has several tall buildings including Plaza Tower One and Palazzo Verdi, but the area clears out after 6PM. At this point, I was overcome with the sudden instinct to hunt because I immediately left the museum at the western gate and peered across the street into the open space. It was obvious that the open space was where the coyotes were and in retrospect, I had previously seen a coyote there and had three more encounters within a mile of the area.

I crossed the street slowly and began to descend into the lower terrain and subsequent temperature inversion of the open space. My ears pointed me to a high area in the middle of the space and my eyes finally adjusted and I could see several running around atop the high spot. I stopped and set up my tripod and tried to be quiet as I took a few pictures, though I was aware that they were watching my every move. (click the images for larger versions) 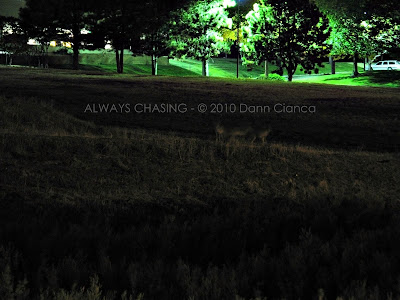 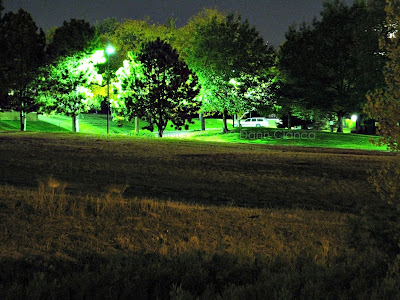 They were moving around a bit, so my fifteen second exposures are blurry and cannot account for an accurate description of their numbers. I know there were at least two and very likely three. I tried to get a little closer and they suddenly stopped calling and disappeared off of the higher ground. The low-lying area between our positions consisted of very tall grass and brush and was not penetrable by myself, though I could hear movement in it. I held my ground as I didn't feel that confronting multiple wild canines was the smartest ideas even though I feel that I could protect myself on such an occasion. I didn't see any reason to force the issue.

The calls began again soon, now to the northwest of where I was, so I adjusted myself north and stayed on relatively bare ground. I couldn't see them, but I could hear them. There wasn't quite enough contrast to pick out their silhouettes on the dark ground. I would have to wait until they crested a horizon, which finally did happen again. I did see one head west down East Caley Avenue, but there were two others calling loudly nearby. (They were probably saying, "THERE'S SOME DUDE HERE! ALERT!" For those of you into animal calls, I would describe what they were doing at this point as several barks and then a cry or howl. You wouldn't believe how loud it was! I set up for several more pictures, pointing west before deciding to leave them alone and go about my way. 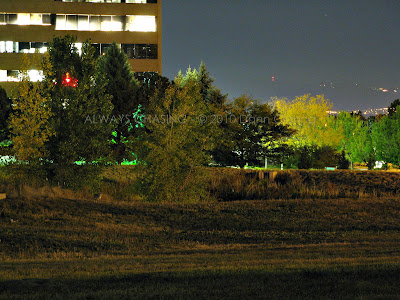 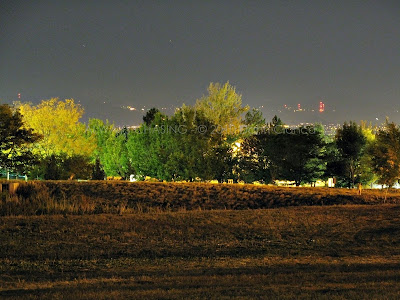 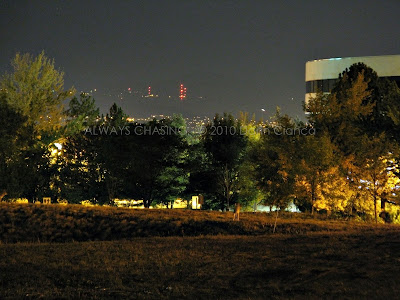 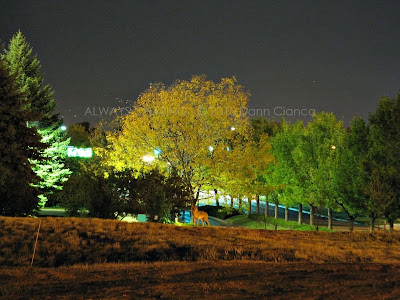 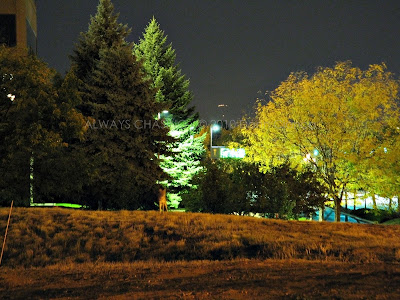 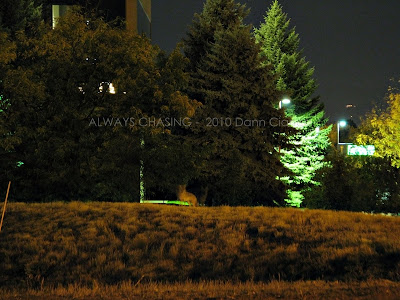 Now, I'm sure you're asking yourself what would support a pack of coyotes in this urban area aside from the occasional kitty or chihuahua. Well, the answer is bunnies. As I returned to the museum, the grounds were covered in rabbits... which is not an uncommon sight. 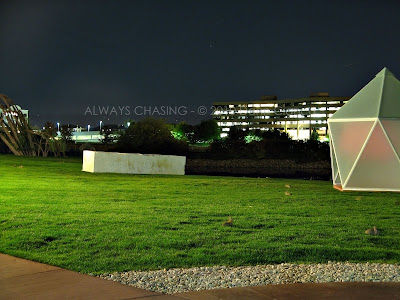 At this point, I figured I'd take several more photos of the exhibits and then head home. 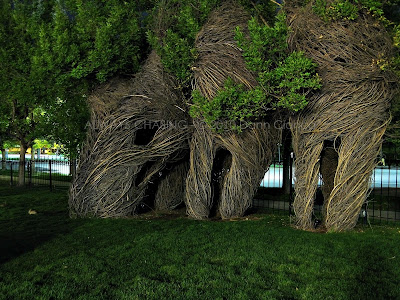 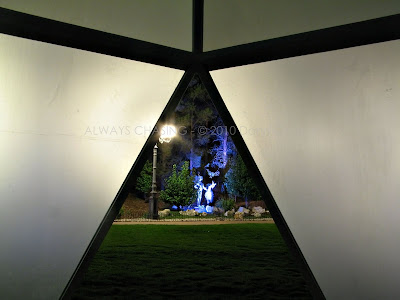 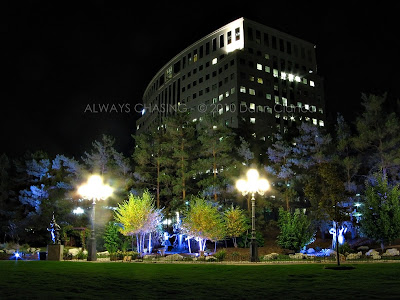 Museum grounds with Palazzo Verdi in the background. Imagine the coyote calls echoing off of this building! 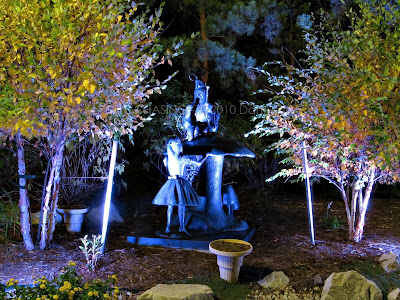 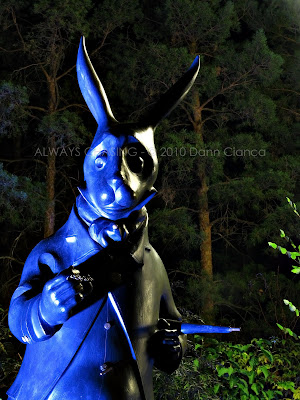 It turned out to be quite the evening... just me, my short running shorts, a point-and-shoot camera and some urban wildlife. And I'm not talking about the cougars.

Muahaha
I almost fell over reading the cougar bit. Priceless.
I really like the photos Dann, you have a good eye for processing IMO.