Since moving to Grand Junction and pouring over detailed maps of the area, I had decided that No Thoroughfare Canyon was high on my list of desirable hikes. The canyon exists as a deep cut into the uplifted Uncompahgre Plateau and basically marks the southern border of Colorado National Monument. Check out the terrain map below: 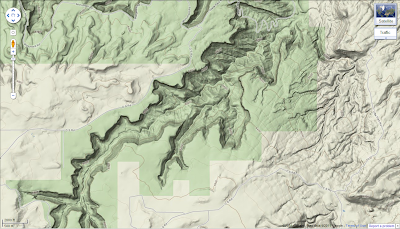 On several maps, there "intermittent" waterfalls are marked at various locations along the canyon bottom. This was enough to get me salivating. I do enjoy "destination hiking" as I like to call it, and waterfalls (like a tornado on a storm chase) are my top destinations.

I spent the day getting some chores done and went into the station to check out some weather information. There was a shortwave coming through late that night and I was hoping for thunder. We got our best version of a chinook wind going in the warm air advection pattern and I was definitely hoping, but as it got dark and the axis of the shortwave was still just reaching the Wasatch Front, I figured I had some time for a hike before sunset.

So, I drove the ten minutes to the monument entrance and set off on the No Thoroughfare Trail. A sign said that it was about a mile to the "First Pool" and then another to the "First Waterfall".

The trail deviates from the Old Gordon/Echo Canyon trail before descending into the wash and then from the Devil's Kitchen trail a bit later. The wash is actually product of the canyon itself but the trail doesn't actually meet it until a quarter mile in or so. Once down in the wash, I felt at times as if I was about to round a bend and run into C3PO and R2D2. The light was quite pretty, however, and the towering sandstone walls were lit up. 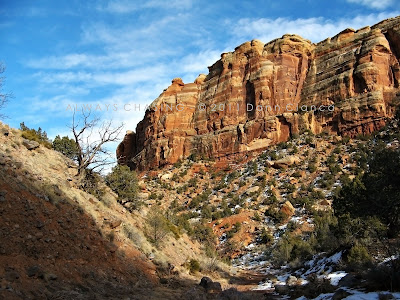 I was a little disheartened to find that the wash was dry, though there were a few frozen puddles scattered about. The air temperature was actually close to 60ºF and while I anticipated a massive amount of funneling in the canyon, it was actually quite calm.

The trail alternated between sandy/gravelly wash and rocky outcrops. The farther I traveled, the colder it got. Eventually, I made it to the first pool and found the small waterfall there frozen over. 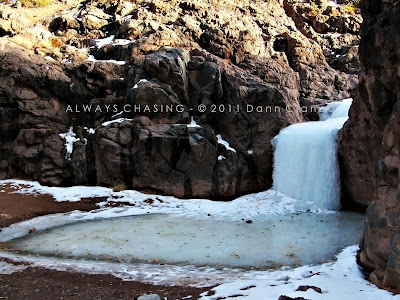 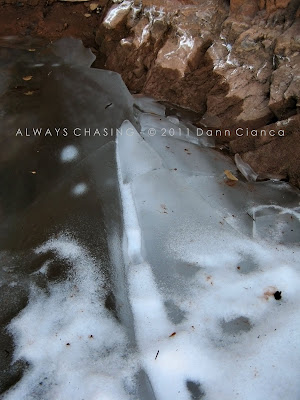 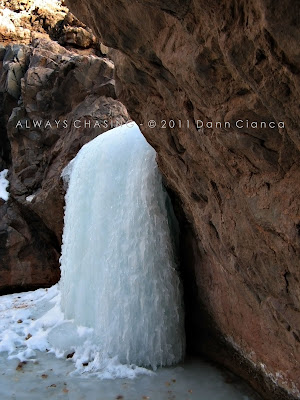 I enjoyed the silence there for a while but didn't linger, knowing I was racing the sun on this particular hike. I did stop to take a shot of the northern wall of the canyon on the trail as it climbed up the rocky hill beside where the water is forced to fall. 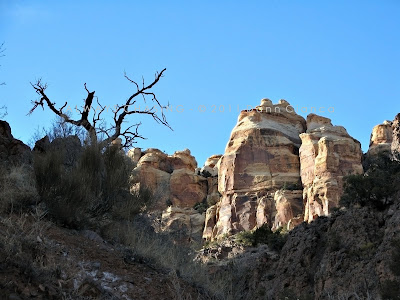 The trail continues in similar fashion past the first pool, alternating between the sandy/gravelly wash and areas of rock. In many areas, now, snow and ice filled the wash and in between ran occasional trickles of water. 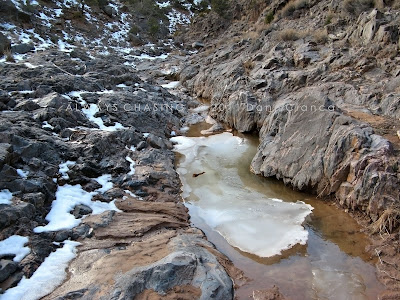 The air became colder and more snow could be found as I explored farther into the canyon. It also tightened at times, forcing me to scramble over slippery wet and icy rock. This slowed my progress to some extent.

Finally, I came around a bend and saw a towering, but frozen waterfall. Unfortunately, the path to it was littered with boulders covered in snow and ice. It took a considerable amount of time to transit the boulder field, but once I did, I found myself staring up at an easily eighty foot waterfall... which like the smaller plunge into the pool in the lower canyon, was quite frozen.

At the base of the fall was a deeply cut pool, which was only half-full but frozen. Water dripped down the facade of the rocks and off of long icicles down into the pool, but only a thin film of water rested atop the ice. I explored this area for quite some time, taking pictures of what I could. The waterfall faces east-northeast and with the light in the west, the light could certainly have been better.

I climbed around for different angles, trying hard not to fall and coming quite close many times. I did actually put a foot through the surface of the ice on the pool while trying to cross over it, so I did end up with a shoe full of water. 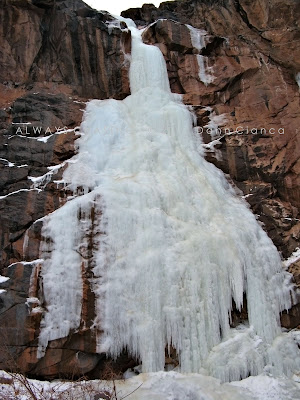 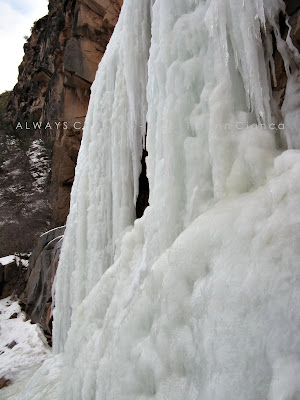 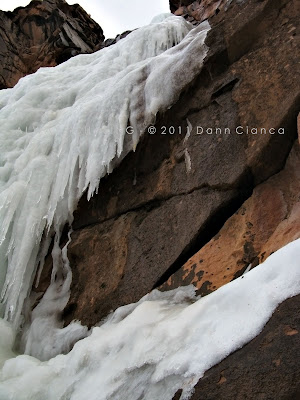 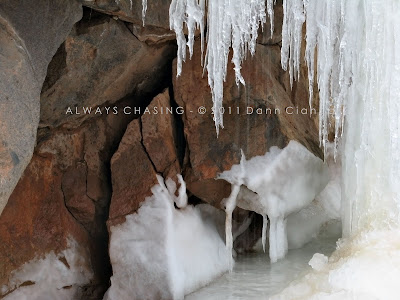 I found this small, recessed area behind the frozen falls quite worthy of a picture. 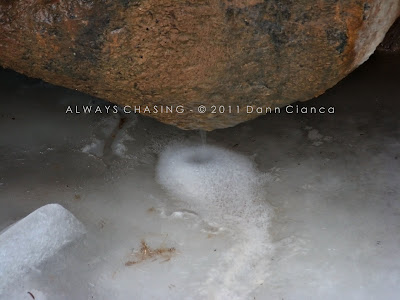 Water seemed to flow down to the tip of this ledge, dripping regularly into a small pool. 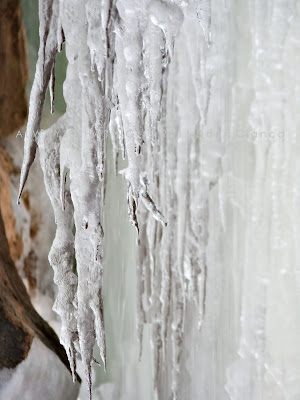 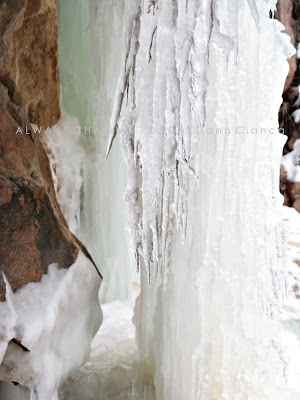 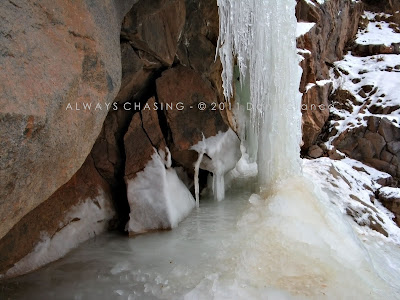 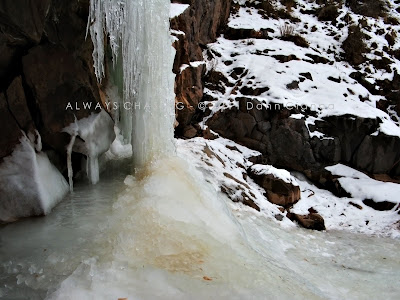 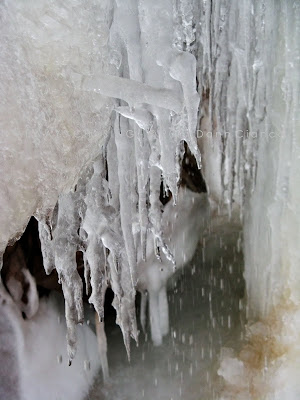 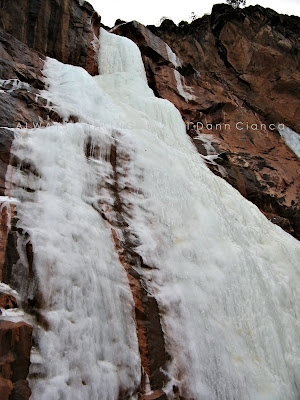 The light began to fade and I realized I still had a couple of miles to travel to get out of the canyon, with the first part being rather treacherous, so after a meal of peanut brittle, I hit the road and scrambled back over the boulders. 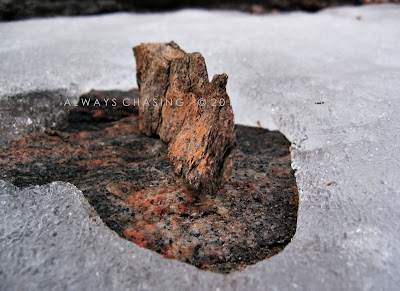 Just half-way between the two falls, the sun set and lit up the sky. It hadn't necessarily been a sunny day with the high cirrus shield, but somehow the sun managed to make it under and light it up. I stopped before making it to the first pool and attempted to take it in, though I was honestly mostly unsatisfied with the results. 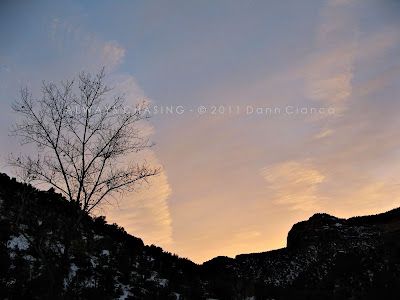 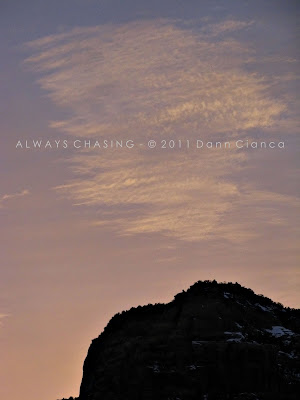 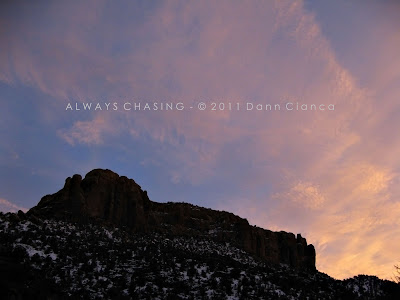 After that, it got dark... quickly. I made good speed down the trail, however, passing the first pool without stopping. Luckily, most of the slippery terrain was behind me, so I continued rapidly toward the trail head. I tried and failed to sprain my ankle, which I was grateful for.

Eventually, I emerged from the canyon as darkness was fully setting in. I realized that I had been quite alone on the trail, not having encountered another hiker. At the junction of the No Thoroughfare/Devil's Kitchen trails and the Old Gordon/Echo Canyon Trail, I turned to see cumulus beginning to form over the plateau. It was obvious to me that the shortwave was getting close. 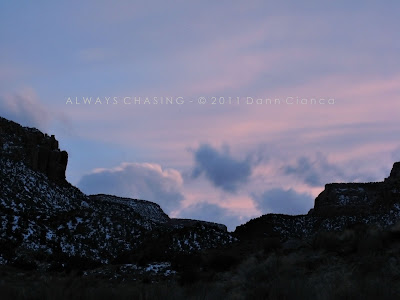 It was much darker than it would seem at this point. This is a fifteen second exposure.
After reaching my vehicle, I headed back in to work to check out the parameters but saw that though lift was approaching, instability in the area was weak. I had thought to go attempt and see some lightning, but based on my forecast, opted not to. This was a good call on my part as though a few showers moved through the area, no discharges ever occurred.

As with Echo Canyon, I decided that I wanted to back into No Thoroughfare at a time when there was more water... whether that be during a faster melt or after rain/thunderstorms. Plus, there was still another waterfall farther up-canyon.

id really like to do this hike. can you tell me how prepared you were for this adventure as in did you take a map compass etc... and also what to expect outta this hike thanks
cory.bice518@gmail.com

Another lovely batch of photos Dann, I really like the first one.
That is going to be some wicked lightning landscape when it does come.

Cory:
This hike is pretty easy and doesn't require much in the way of anything short of normal preparations for any hike. The trail follows a few signs and the wash/creekbed. It is pretty easy to follow. You could be in and out in a couple hours.

Hope this answers your questions!

Boomer: Thanks, the first one was my desktop for a good, long while. :) Please make lightning season start now. I'm getting desperate!