After visiting Arches National Park in late March (accounts here, here, here and here) , I went a little "arch crazy". I spent a lot of my free time researching area arches and made plans to visit many of the easily accessible local arches.  One of the arches mentioned on the Bob's Arches website is an arch at Miracle Rock.  Miracle Rock is a large balancing rock on a sandstone outcrop in the Little Dolores River Valley.  I had previously passed the area on a trip to see the Potholes of the Little Dolores back in late January.  At the time, the potholes were frozen and inaccessible, so I promised a return trip.

It was late in the afternoon when I decided to head out, taking the drive up Little Park Road to Glade Park.  I reached the Miracle Rock campground in the early evening and set out as a weak convection and a light rain approached.  I passed by a couple of people returning from their short hike as I made my way through the piñon-juniper scrub.  I made quick time up the slope to the crest of the ridge where Miracle Rock sits.


The light was bad when I reached the top, so I opted not to take any pictures.  I marveled briefly at the enormous sandstone boulder, which seems impossibly balanced on its perch.  Then, I watched as the unstable atmosphere actually started working on some storms. 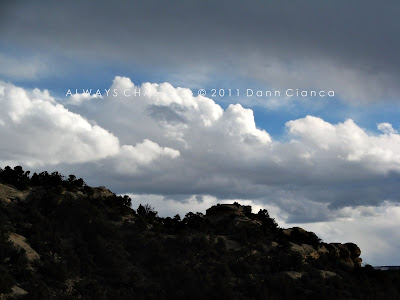 .
After a moment of gazing at the sky, I continued southeast from Miracle Rock.  A pathway followed a wide ledge between a cliff leading to the piñon-juniper covered valley floor and another elevated section of sandstone above.  The path follows a natural amphitheater and eventually turns straight south.  The trail itself becomes more and more difficult to follow the farther south one travels.  At times, it seemed to disappear completely into treacherous slides of gravel, which lead to several uncomfortable transits over exposed edges.
From what I had gathered in the descriptions I could find of the arch, it was south of Miracle Rock.  I made it as far south as I could manage, though my pack, camera bag and tripod made the journey cumbersome.
Eventually I made it to a ridge that juts westward out from the north-south running ridge that I had been following.  I explored this area thoroughly but was unable to find an arch.  Continuing farther south seemed difficult, if not impossible due to an extremely exposed and sloped slick rock section which tapers precipitously to a cliff.  I wasn't about to try it, so I started to head back. 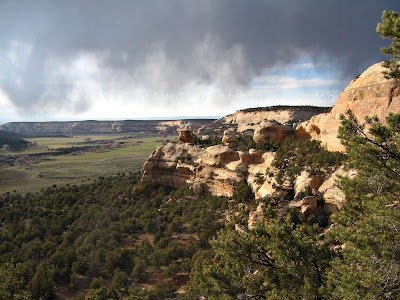 For the first time, the sun came out briefly to illuminate the area.  This seemed only to further invigorate the surrounding convection, which almost started looking impressive... in an early year, Western Slope fashion. 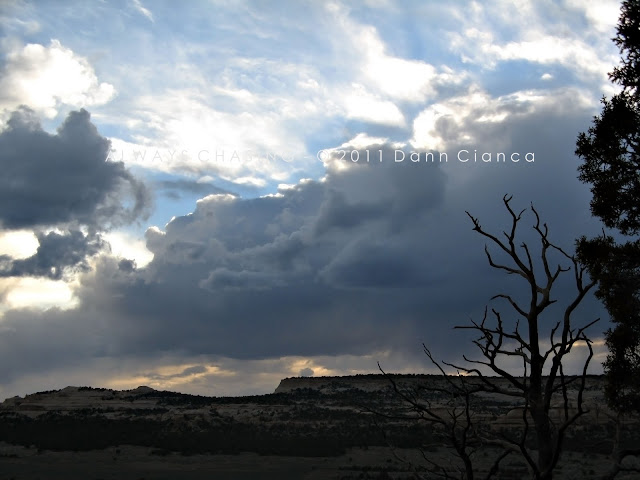 Convection trying to give it a go.
The trip back to Miracle Rock went a lot quicker and was without incident. 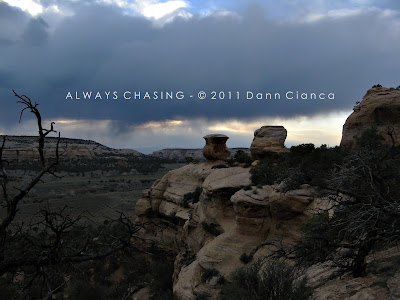 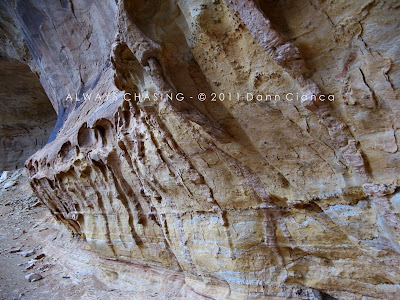 Close-up of the sandstone amphitheater wall.
When I reached the monolith, I took a few different angles and put myself on the cliff's edge to get the best photos possible given the lighting conditions.  The winds picked up occasionally, giving me a scare or two while perched on the edge. 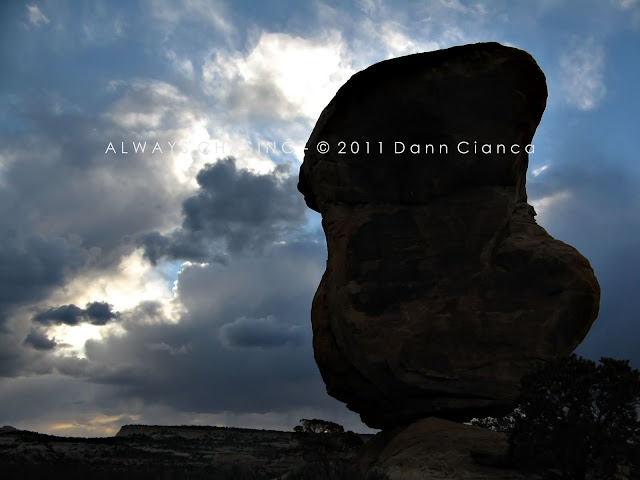 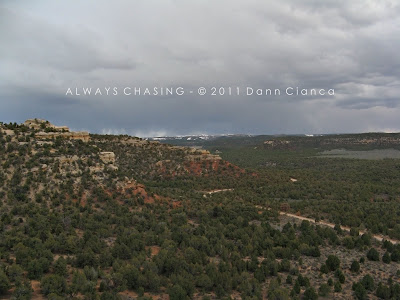 Looking south to the highlands of Piñon Mesa. 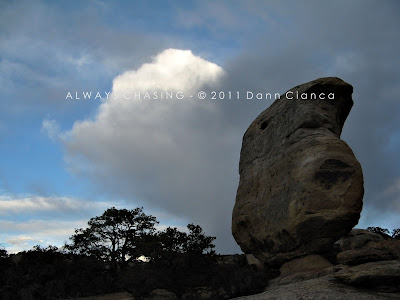 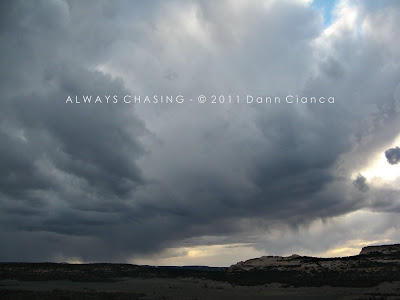 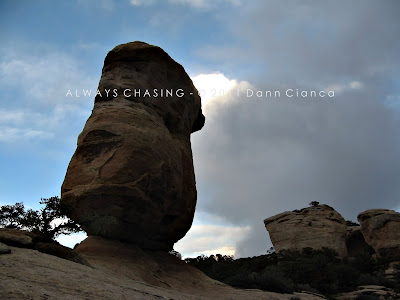 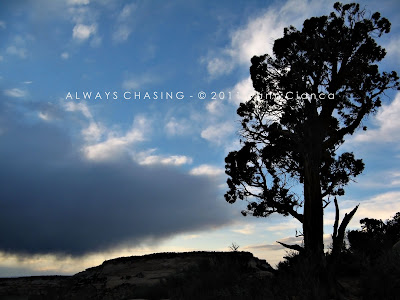 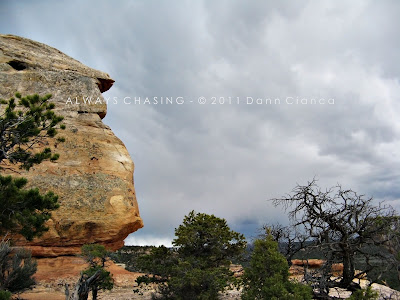 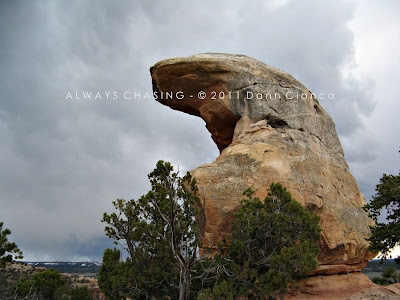 It was starting to get dark, so I made haste back down to the campground and my vehicle.  When I reached my car, I realized I had time to make a quick jaunt over to the Potholes of the Little Dolores.  If I was lucky enough to discover a short hike to the "falls", I figured I could get a picture or two in the fading light.

The drive between Miracle Rock and the Potholes is short and I reached the campground there (which I had previously found covered in deep snow in mud) in about five minutes.  The roads were rutted but dry when I arrived.

The Potholes are filled with swimmers during the summer and I'm told that at least once per year, someone dies by getting drunk and jumping into something they shouldn't.  I kept that in mind as I approached.  The hike to the potholes is short from the campground.  It starts on a double-track trail and then crosses granite slick rock.

I was delighted to hear falling water as I approached... and lots of it.  Peering down into the inner gorge, I was able to spot a series of photogenic drops.  One was more easily accessible, so I climbed down into the canyon using a trail and took a few angles. 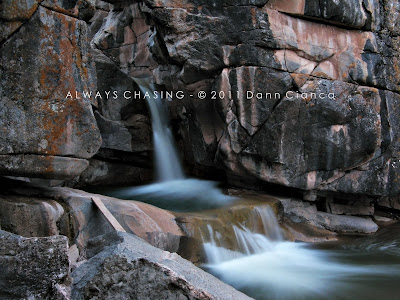 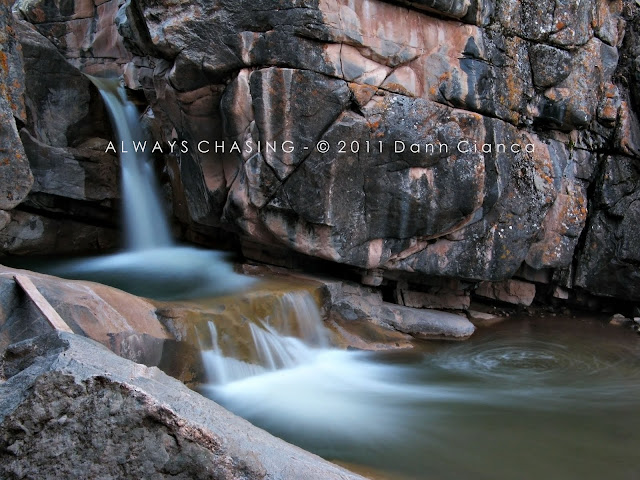 Potholes of the Little Dolores River 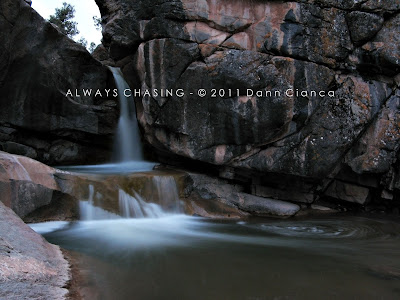 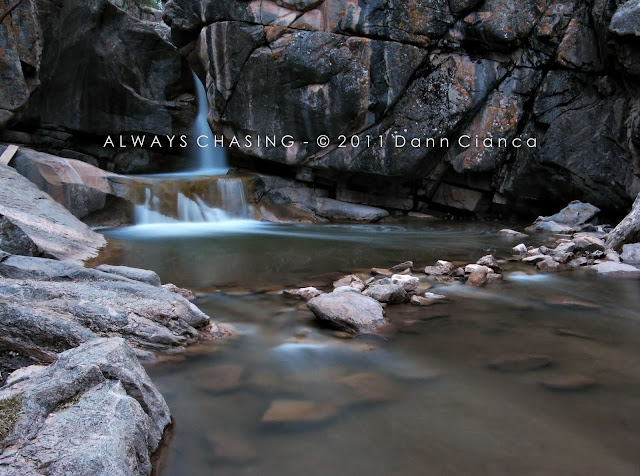 Light was fading fast and rain was spitting again as I climbed back up to the top of the canyon.  I noticed a ledge that I could climb down onto to get a view of not only the lower waterfall (above) but the upper drop(s) as well.  It seemed set my tripod and camera on the edge and lowered myself down onto the narrow ledge.  Rain began to mix with sleet and became heavy as I quickly set up my tripod and tried to get a few shots. 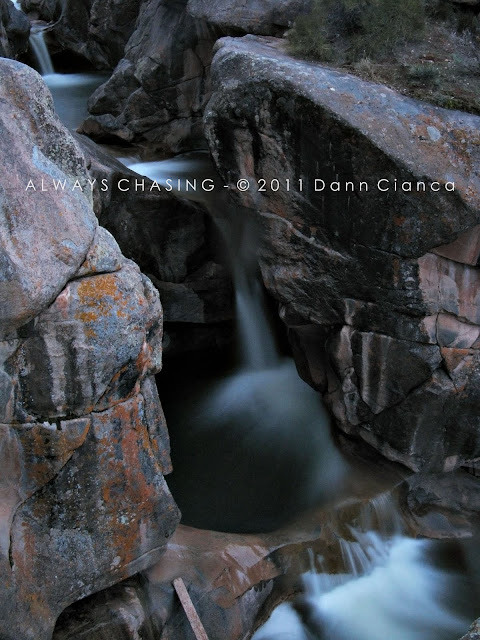 My lens kept getting wet, so I only ended up with one usable shot.  I decided it was time to go but realized I had a problem.  The ledge that I had lowered myself down from was at chin-height and was an overhang.  Below was a twenty foot drop onto rocks.

Not only had I let myself without a reasonable way off of my ledge, but it was also now precipitating moderately (rain and grauple), making everything slippery.  And it was getting dark.  A bit of panic began to set in as I realized I had no idea how I was going to escape this ledge.  I remember posting on Facebook that I was heading up to Miracle Rock, but I had I mentioned the Potholes too?  Did anyone even know that I was there?

I contemplated my options for a while and realized the best way out was to put my gear up on the ledge and shimmy out to my left (downstream).  Though the area I was standing on was much more narrow, the ledge above sloped down to about chest height.  From there I was able to basically jump up, propelled by my arms and basically chest-flop onto the ledge. The bulk of my weight landed painfully on the lowest point of my sternum and had I not found a hand hold, I'm not sure I would have remained on the ledge without sliding back down perhaps thirty feet onto the rocks below (don't tell my mom).

I had several scrapes (and ultimately) a bruise on my lower chest and felt pretty stupid for putting myself in that situation. ... and it wasn't the first dumb thing I've done while hiking this year.  I'm hoping my luck doesn't run out one of these days.

On the way back into town, I actually saw a couple flashes of lightning.  I stopped once at an overlook to expose the skyline, but didn't see any further lightning after that part. 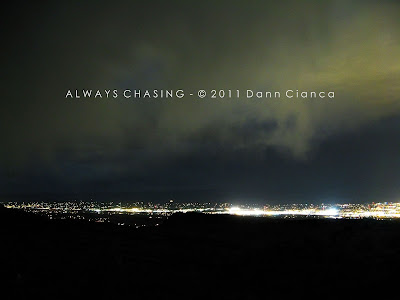 Looking north across the Grand Valley from Little Park Road
All in all, I was disappointed not to find the arch at Miracle Rock but it was cool to see the monolith itself.  I was quite satisfied with the photos of the Potholes, even though I almost killed myself.

Beautiful photos, Daredevil Dann, sounds like santa should bring you a emergency locator for xmas!

Be careful man, always time to go back with a friend to the tricky spots.

I realize that probably sounded a little dramatic. I'm still a little ashamed of myself for it.

It sounded realistic to me, I've been there countless times, though not for a long time now.

One day it just hit me, all alone, thinking of the grief it would cause.

Not only for family, but for the poor buggers than would find my coyote gnawed bones, rescuers etc.
And me, if I had to linger there for days in a rumpled heap with critters chewing on my junk.

Now I only get occasionally silly, and only if there's someone to witness my plunge into the ravine so they can call 911. :)

All very valid points... and I've been much more well-behaved since. :)