Ashley, a friend of mine, was moving away from the Western Slope of Colorado.  I had asked her if there was any place she wanted to visit before she left and she said Ouray.  Frankly, Ouray was at the top of my list of places to see as well, so I was pretty excited to go explore.

We had a day to work with, so I looked for a reasonable afternoon hike.  On a map, I found mention of a waterfall in the San Juan Mountains, south of Ouray called Gray Copper.  Surprisingly, it was difficult to find any images of this waterfall online... which made reaching it more enticing.

It looked as if there was an actual forest service trail to the falls that was just over two miles long but had a little over one thousand feet of elevation gain.  With the base at 9,700ft, I knew oxygen was going to be at a premium, but it wasn't a deterrent.

We hit the road out of Grand Junction on a sunny Tuesday morning with her small dog Ella in tow.  Once in Ouray, we wandered around and had a bit of delicious lunch.  The weather was absolutely spectacular. 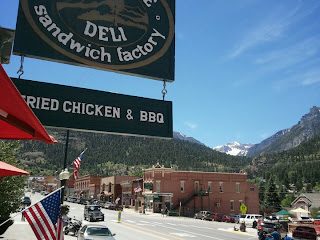 The Gray Copper trail head is south of Ouray, just off of US 550 in Ironton Park.  It isn't well marked, but I had a pretty good idea where we were going.  The road turns from gravel to rock and then fords the creek, which meant the end of the line for her Honda.

So, we packed up and she put her dog in a special-made backpack.  The first hurdle on the trail was the creek.  Swollen with meltwater, the creek was roaring down the gulch and didn't feel to be much more than freezing.

In my old tennis shoes, I had no qualms about walking through (jumping was out of the question).  The water was almost painfully cold, so it made sense that a few yelps and hollers helped to dissipate the shock.  Ashley followed me after some coaxing and when the numbness faded, it was almost refreshing.  Almost. 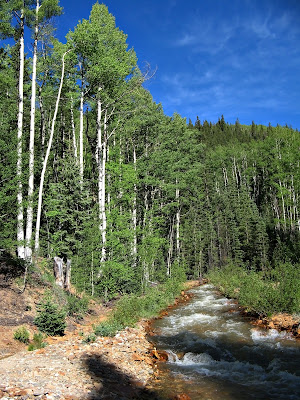 Gray Copper Gulch
The trail is doubletrack for a while, an old mining road I presume.  Eventually, we came across the first sign that we were actually on the correct trail... 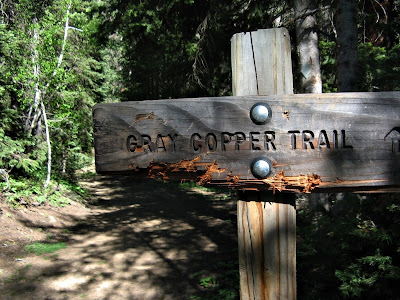 Are you sure it doesn't say "Gary Cooper"?


The trail quickly climbs and my lungs felt like they were doing jump ropes, right away.  However, my fatigue was easily overcome by the incredible surroundings.  Though late spring, the aspen were just really filling in and the weather could not have been better. 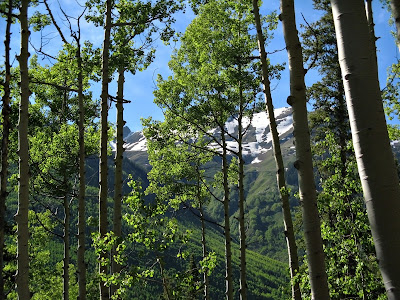 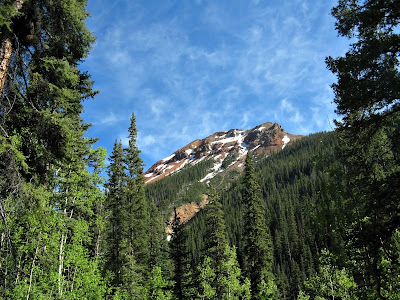 Looking up the gulch to Red Mountain No. 1.

Not too long after the Gray Copper sign, we found a register box that only had one other entry for 2011.  We were practically blazing a new trail!  Well, okay... but we sure felt special.

Though the trail was steep at times, I couldn't help but be absolutely captivated by the surroundings.  Not only was scenery unbelievable, but the smell of the warm pine trees and the roar of distant cascades which seemed to run down every crevice on nearby mountainsides really filled out the experience.

The trail paralleled the gulch but was high above it at times.  Ashley let her dog out occasionally and I kept my eyes and ears peeled for predators.

Eventually, we came to a place where we had to ford the creek once again.  It wasn't an easy crossing either as the approach was a steep, dirt slope.  The creek also was forced into a tight space, so it was deep and swift.

I crossed first in order to gauge the the depth.  It came half-way up my thigh and was about as cold as I could possibly imagine, but I was able to anchor myself enough to compensate for the force of the water and also avoid getting any of my gear wet.

After helping Ashley across, we found our way into an open park with a view of most of the end of the gulch.  There was a large cascade pouring down the mountain, but I didn't believe it to be the actual falls... which at that point, I could definitely hear.

The trail leaves the park at that point and begins to switch back in heavy timber up the southwest slope of the gulch.  We could definitely hear the roar of the falls... and it sounded amazing.  On a couple of occasions, we even had to climb through hidden piles of snow that blocked the trail.  Eventually, the trail switches back higher but the view yields the falls... and they are absolutely stunning. 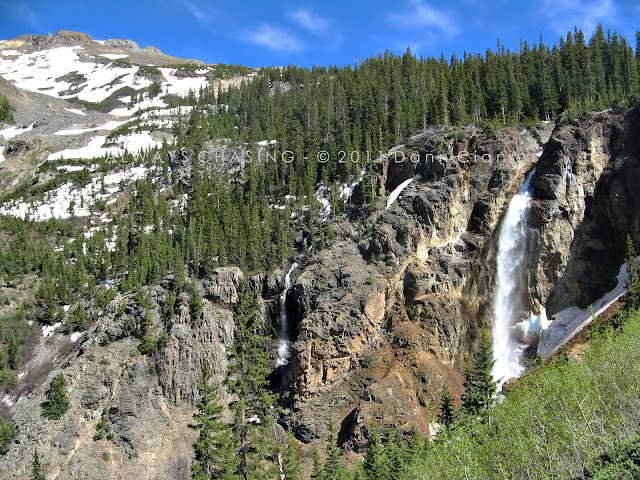 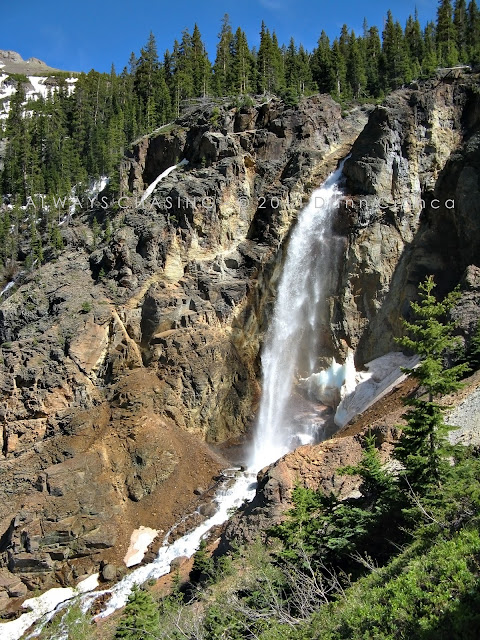 I would estimate the actual plunge to be about 150ft.  And of course, I began clicking away... 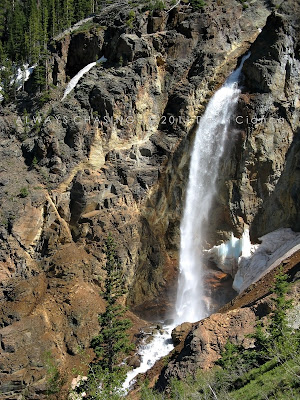 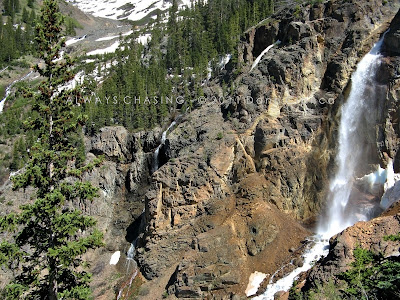 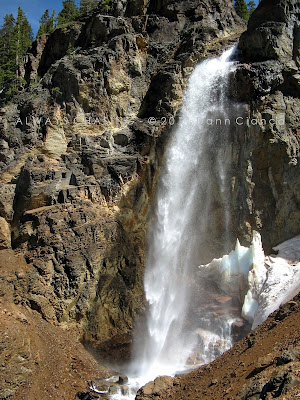 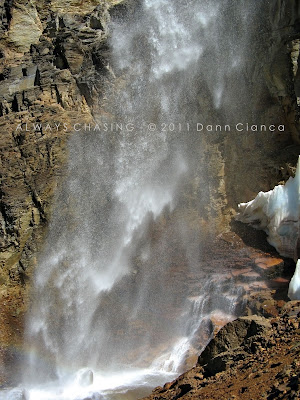 Of course, I had to get closer.  We couldn't really find a trail that led directly to the falls, so we had to make one.  I dropped off of the trail into the underbrush and walked diagonally down the slope toward the falls.  After navigating some deep growth, I came across a slide or scree area which I had to kick foot holds into.

Ashley chose a path above mine and worked her way over to a rock outcrop that afforded a better, close view of the falls.  From there, the mist would rise and cool us, which was nice even though it wasn't necessarily hot out.

I decided I wanted to get even closer, so I descended the outcrop onto another scree slope.  This one had a lot more moisture in it, so while it was easier to plant my feet, it also gave way much easier.  I did have a clear shot to the falls, however.  (you can see the rock outcrop and the scree behind it on the largest portrait photo above)

It was almost impossible to avoid the moisture, so I decided to stash my camera gear away from the falls and continue on.  I reached a rock right at the base of the falls (also seen in above images) and stood atop it for as long as I could.  Though I wasn't in the direct fall, the spray and and mist hitting me was so cold that I could not breathe.  It was like that moment in the shower when someone flushes the toilet.  I was literally gasping.  I paused only long enough for Ashley to take a photo (which hasn't been released just yet...) and then returned.

We were enjoying the day but realized that we wanted to accomplish other things that day, so it was time to turn around.  I paused to capture the views back down-gulch. 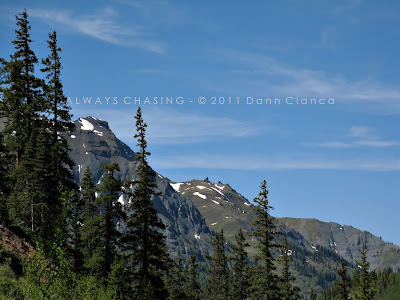 Hayden Mountain On The Far Side Of The Valley 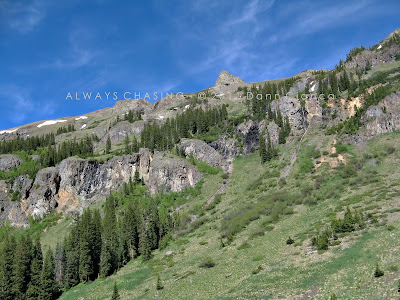 Brown Mountain On The East Side Of The Gulch 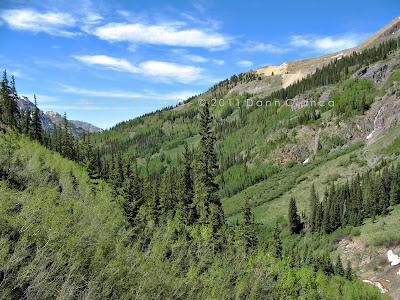 Down The Gulch From The Rock Outcrop Near The Falls

We hit the trail with a quick pace, which oddly enough, was a lot easier than the way up. 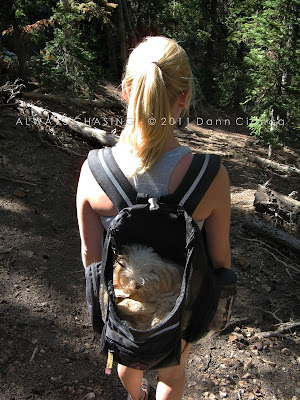 This Is How Ella Enjoyed Most Of The Hike 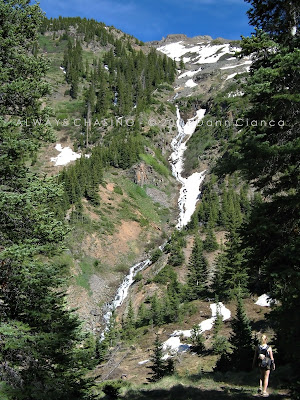 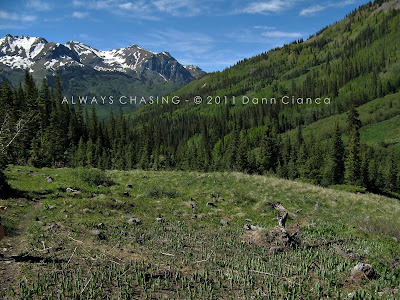 Wildflowers Getting Ready To Emerge


As you can imagine, the fords were just as cold on the way back.  It didn't seem to take too long to get back down to the bottom of the trail either.  I will say that I was very impressed by how well Ella (the dog) handled the hike.  When she was out of the backpack, she stayed with us and when she was in it, she was quite content.

We got back to her car in the late afternoon and returned to Ouray where we had a couple more adventures which will be chronicled in a later post. 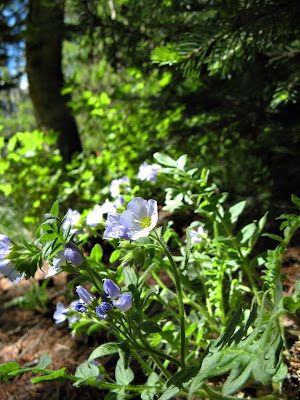 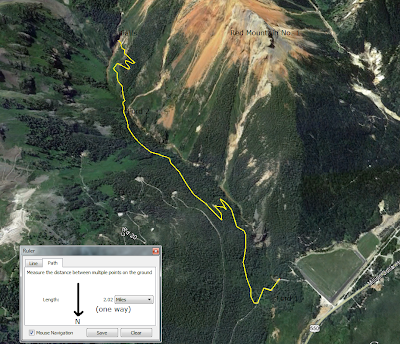 I am so far behind in my blog reading. You have been very busy!
Some fantastic shots in this set, I absolutely love the 2nd shot of the falls.

I really am quite far behind, so I've been making a push to get somewhat caught up. It isn't easy when I've been heading out occasionally, but it helps that I've been a little more picky with the number of frames.

It really is a beautiful fall. I'd love to go back during low-light and expose it.