It was a Saturday night after work and I somehow got the idea in my head to drive far away to catch up with some storms that had fired on the Uncompahgre Plateau.  We were in southwest flow aloft and several weak shorties had come through with more on the way.

I hauled out of town on US 50 all the way to the turnoff to Escalante Road, just inside Delta County.  There was a nice lightning show ongoing, but there was also a lot of rain, so I wasn't able to get out and shoot it.

Eventually, the first storm complex waned and I started to head back to Grand Junction.  Several smaller cells popped up, so I tried to get a few of them from the western slopes of the Grand Mesa via Lands End Road, but they stopped spitting out C2Gs, so I called it a night. 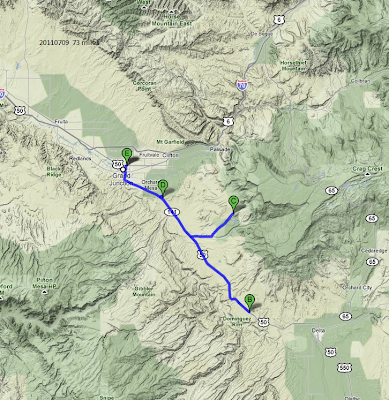