About a month prior to this day, I had visited the West Fork of Pollock Canyon.  On that trip, I though I might have time to explore the east fork as well, but it didn't work out.  So, it remained on my list of desired destinations.

On this particular April morning, a Monday if I'm not mistaken, I enlisted the company of my co-worker Shannon for an adventure into the east fork... promising the possibility of a waterfall.  If you'll recall (as detailed in my post for the west fork), faulting in the area has exposed the hard, Precambrian era stone.  While the water that only occasionally flows through these canyons has an exceptional ability to erode the attendant sandstones and shales, it seems to have a difficulty with the Precambrian stone.  It is that reason, in combination with the vertical depth of the faulting that causes natural drops in the canyons where they cross the fault. There are exposures of the Precambrian stone in many area canyons and these are the locations that I have found waterfalls; several, in fact.

So, we hit the trail by late morning on this particular "Adventure Monday"... that's what we call it when we head out for an expedition on a Monday since we share(d) Mondays off.  On a previous adventure on the Pollock Bench (detailed here), I had explained to her about the fun of climbing in and out of Pollock Canyon.  This would be the day to show her in person!

We made good time, though I was slightly annoyed with the cloudcover.  It's always cloudy in Pollock Canyon, apparently.  Route-finding into the canyon was easy and fun and soon we were on the canyon bottom and headed for the east fork.

To my disappointment, there wasn't any water in the wash.  Once in the east fork, however, we did find a couple of muddy pools... but that was it.

On a great bend in the canyon, we discovered an alcove high up on the canyon wall and speculated that we might be able to climb into it.  The sandstone seemed manageable, so we began to ascend.  It was a little more steep than we had initially thought, however, and soon we found ourselves at a level where we could no longer proceed.

Shannon sat down for a while and I decided to hike along at the same elevation on the slickrock wall to see if there was another way up.  I snapped the following picture after I realized I wouldn't be able to safely get any higher.  I think it's a good example of how steep the stone was! 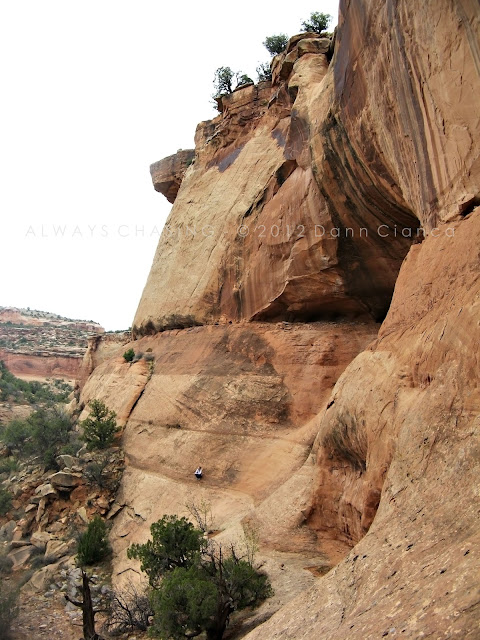 
We gave up trying to climb and hit headed back down into the wash, our destination still upstream.  Soon, we caught sight of a Precambrian stone wall up-canyon. 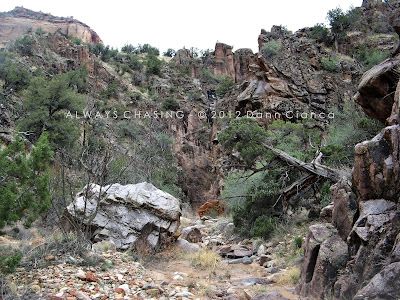 I noticed soon that there was a small amount of water trickling along in the wash as well, which was promising... but not near enough to have any sort of waterfall.  As we approached, it became obvious that there was a little notch in the wall that the water had carved or at least used as the path of least resistance.  It was like a short slot canyon which opened up to a little hollow.  Water trickled down the far side of the hollow at what would be the waterfall if the flow was higher. 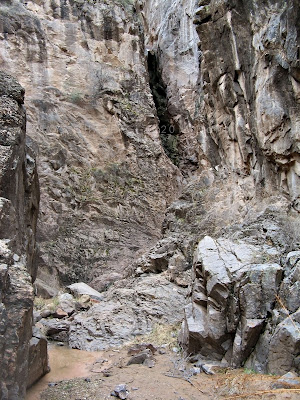 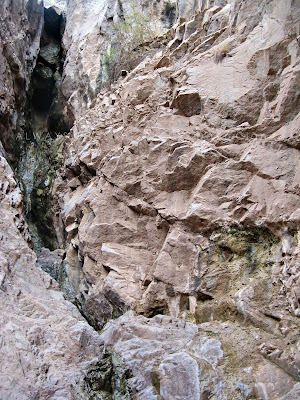 Looking up the "trickles" 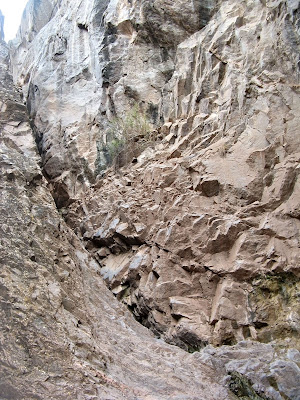 We decided to take a bit of a rest here and have a snack.  I enjoyed some tropical trail mix and ad libbed a little tune about it.  Then, I tried to take some creative photos with relatively mixed results. 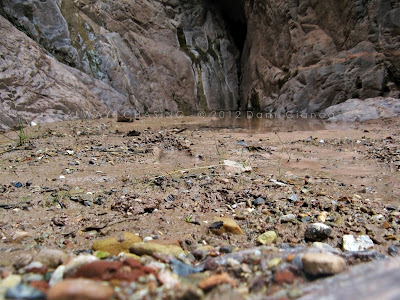 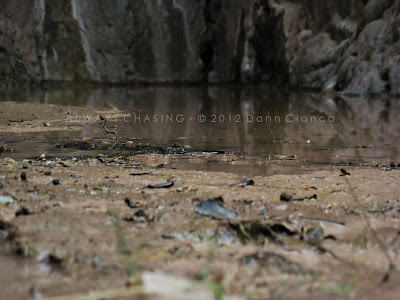 We also took each other's picture at the pool.  Not sure where mine went, but here's Shannon for scale... 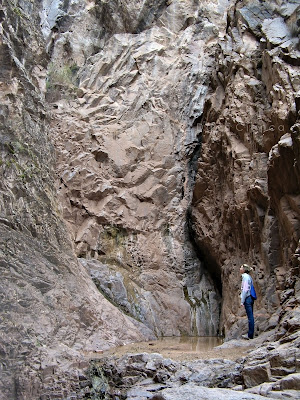 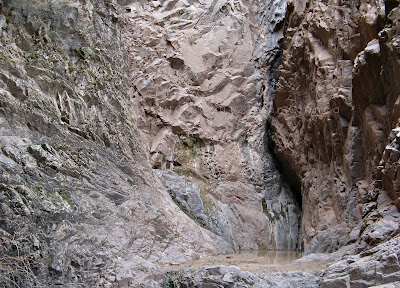 No scale!  What's the scale?  Nobody knows! 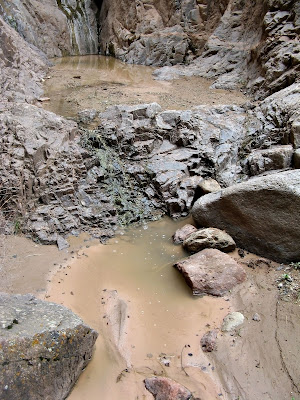 After hanging out there for a while, we headed back.  Walking along the wash, Shannon was suddenly startled by something to our left.  It turned out to be an abandoned shepherd's cabin!  I'm not sure how we missed it the first time by... I had actually noticed an old fenceline nearby which was on the edge of a relatively clear park above the wash. 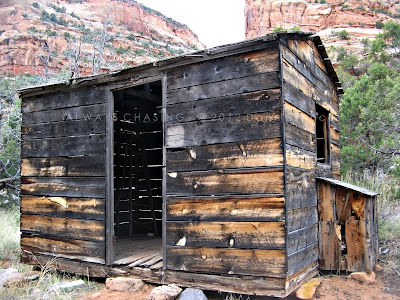 We decided to explore the little cabin and its contents. 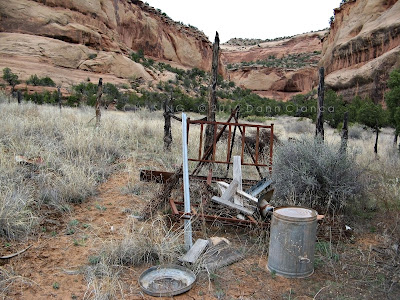 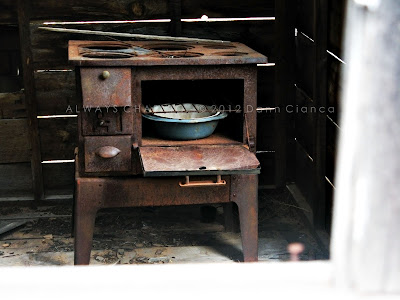 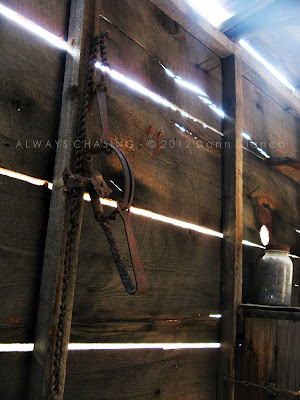 Some sort of animal trap. 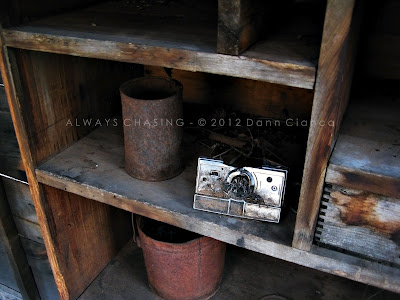 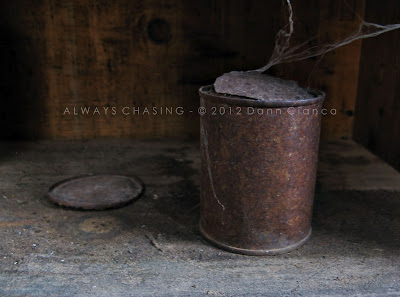 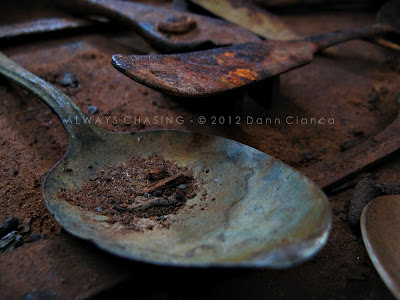 This was my favorite image from the day. 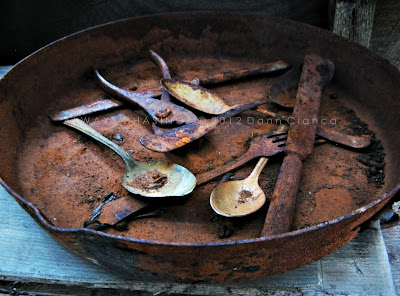 The area had been historically utilized for sheep farming, though it is no longer and is now a conservation area.  There is a similar cabin in Devils Canyon ... which I talk about in this post from 2011. 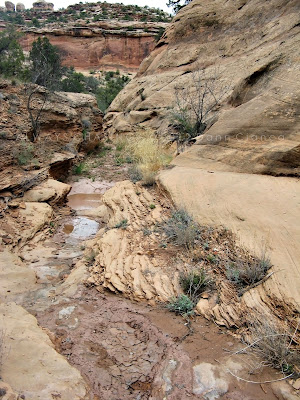 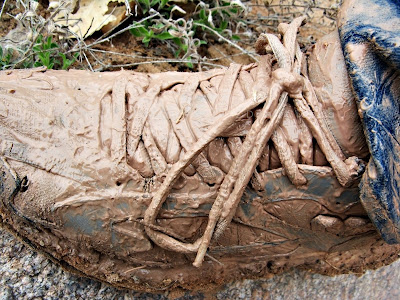 Shannon vs. the mud trap 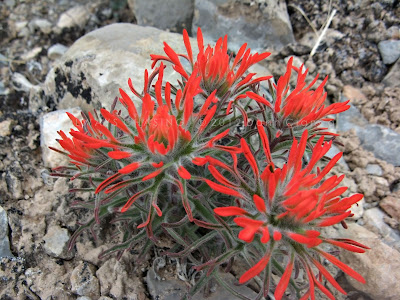 Flowers back up on the Pollock Bench.


The rest of the hike was uneventful.  We made our way out of the canyon, back up on to the bench and to the car.  There may have been a stop for lunch at Wendy's on the way out in Fruita... but that's not too exciting and I'm beginning to wonder why I even included it can't stop typingggg.  Alright, I'm done. 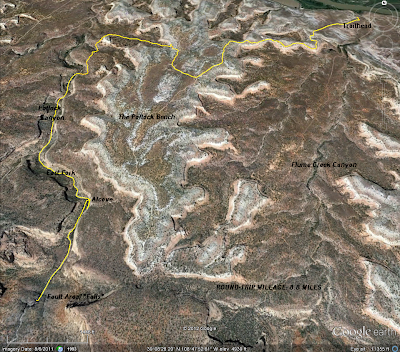 At 8.8 miles round-trip, the hike was a little on the long side, but the terrain wasn't *too* difficult.  It would have been nice to have some sunshine to work with, but it did a pretty good job of staying behind the clouds.  I would love to be in the area during a strong runoff or during a flash flood to see what the falls are really capable of.