In March of 2012, I was doing some research on area canyons and stumbled upon a photo from Rough Canyon which I did not recognize.  It had been posted by a man named Stan Wagon whose natural arch images I had viewed before while doing other research.  I e-mailed him about Rough Canyon but the topic of conversation turned to Perseverance Arch.  Stan had been there once before but planned a return visit in April to approach it from the bottom.  After discussing our mutual interest in the area's arches, he invited me along.

As March ended and April began, I found myself quite excited by the prospect of the journey as well as being slightly intimidated by the 17+ mile length.  The longest hike I had been on before that was the 14.5 mile trip to the Rattlesnake Arches the previous April (2011).  As the day approached, however, I felt pretty confident that I wouldn't hold everyone up, so I was ready to go!

After a last minute planning change, we ended up meeting early on the morning of May 1st.  Stan had two companions with him, John and Elke.  I left my car at the Lunch Loops parking lot and we drove up into Glade Park with our destination being the Jones Canyon Trailhead.

It was a cloudy day and within an hour or so of sunrise when we arrived and began to hike.  The trail is made of sandy double-track lined with grassland and patches of previously burned and never reclaimed piñon-juniper (p-j).  Originally overlooking Sieber Canyon, the trail then follows the canyon carved by the Little Dolores River, eventually approaching the rim as it continues west.

Eventually, we were in live p-j.  After a few miles or so, we stopped for a break along the canyon's edge.  I had an apple and some pumpkin seeds and we sat for ten minutes or so.

Back on the path, the p-j started to get a little more thick and the road a little more rocky.  Eventually, it was to drop quickly in elevation and intersect an old airstrip on the Utah border.  But we weren't there quite yet.  We continued to pass Entrada sandstone monuments which rose from the side of the path. I also found myself in preoccupied with black splotches on the road which I originally thought to be tar.  I eventually realized that they were scat from some animal.

The road was obviously once used more frequently, but it now exists as the boundary and within the Black Ridge Canyons Wilderness and the McInnis Canyons National Conservation Area.  Thus, no motorized travel is permitted in the area aside from the occasional "official" vehicle.

Finally, the trail began to descend over rocky switchbacks affording us a view into the Jones Canyon drainage and Utah.

We took our next break at the airstrip, which was mostly overgrown.  A fence bound the end of the airstrip and a home or ranch was a bit beyond to the southwest.  I snapped a few photos of an Entrada monument to the west which doesn't seem to have an official name as far as I can tell.


The road that led to the airstrip disappeared off to the west and we were left to continue on, cross-country to the northwest.  Perseverance Arch exists in a side-canyon of Jones, just west of the Utah border.  As I mentioned, Stan had been to the arch before, viewing it from the top.  His objective this time was to reach it from the bottom and had scouted a cliff break that he though we would be able to descend.  It was our goal to find that break on the far side of the canyon.

We had to navigate around the small north-south gulches draining into this "southwestern" fork of Jones Canyon.  The group was occasionally steering astray but we kept together and soon found ourselves with a view north, into the canyon and the stunning Perseverance Arch!


Stan's scouting turned out to be correct.  The break in the cliff was steep but not impossible to descend without trouble.  Once at the bottom, we followed the wash for a while. 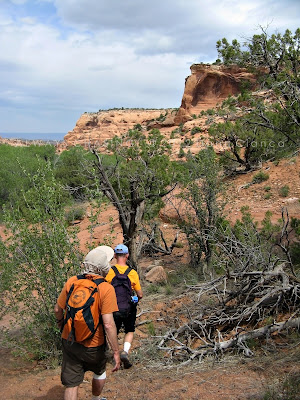 We did eventually leave the wash and continued along on a bench above it all the way to the base of the arch.  There was another break over the slickrock at the base which we scaled up. 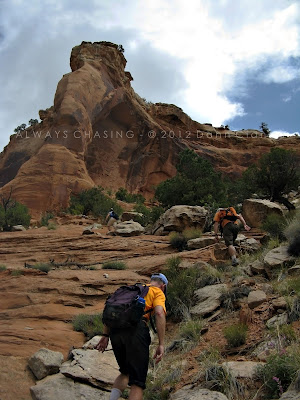 It's difficult to explain the awe which this arch inspires.  It's just hard to believe one of such size goes virtually unknown to the world.  I was a little winded on the way up, so I took a few breaks to catch my breath and an image or two.  The sun seemed to come out at the right moments to really add some color to the scene.

Perseverance Arch is comprised of Wingate Sandstone with a Kayenta cap.  Its opening is 55ft wide and 100ft tall and is considered a "buttress natural arch." 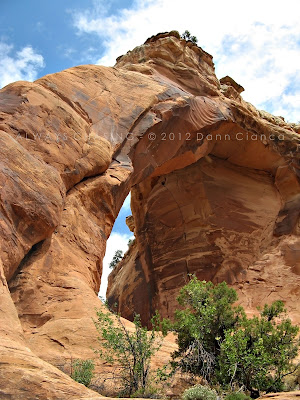 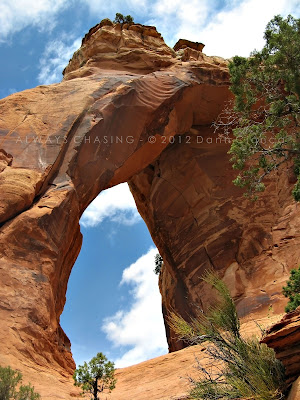 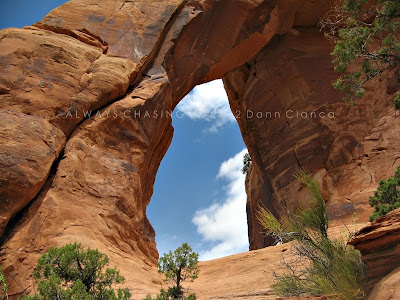 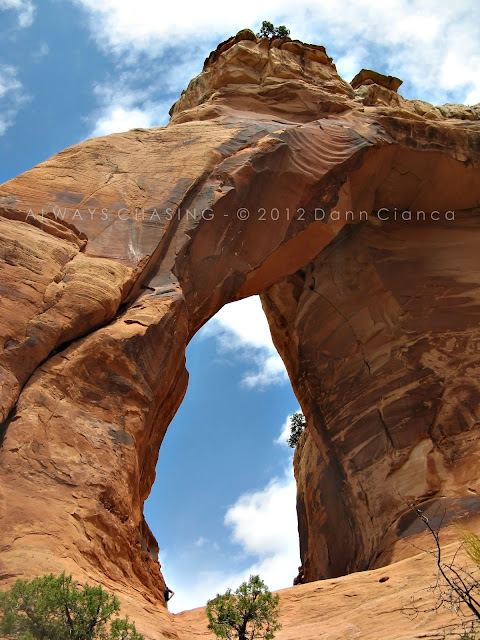 Elke and John were content to have their lunch under the arch, while myself and Stan, both quick to grab our cameras continued capturing frames of the enormous arch. 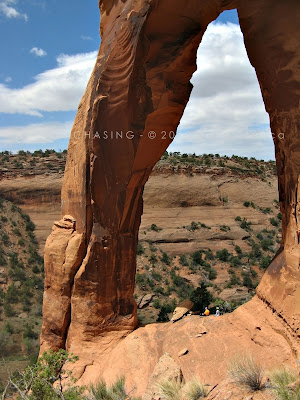 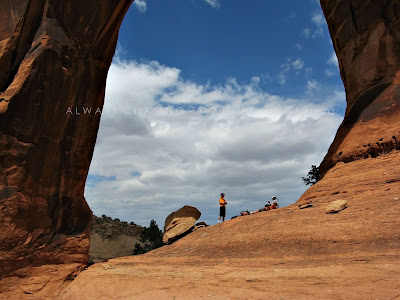 Finally, I sat down under the arch's span for my lunch which consisted of an other apple, a protein bar, some wheat thins, more pumpkin seeds and plenty to drink.  The wind occasionally picked up, blasting us with sand leaving it easy to understand how such a feature could be carved!

Before we headed back, I hiked to the other side to capture one poorly-lit image of the arch.


John and Elke were quick to head down into the bottom of the canyon while Stan and I lingered, trying to get a few more angles. These turned out to be my favorite shots. 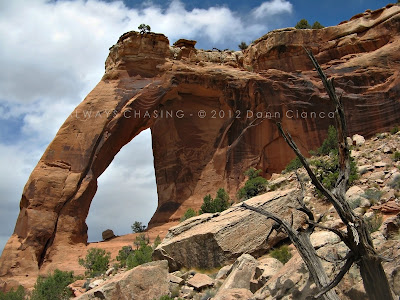 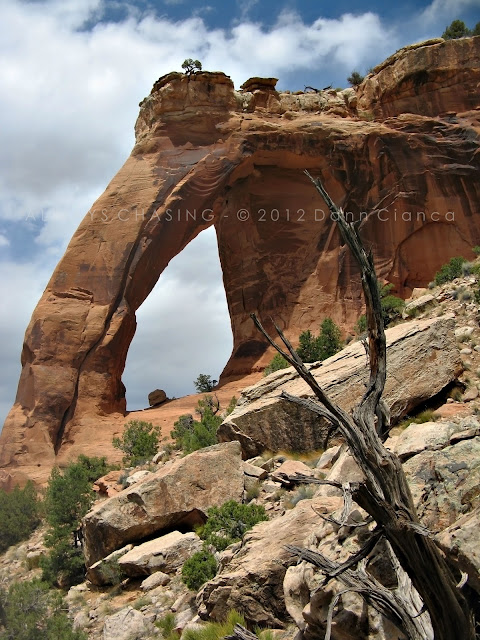 We met John and Elke at the canyon's bottom where they were cooling their toes in the clear water of running length of the wash.

As we continued onward, there was some discussion as to whether we could find an alternative route out of the top of the canyon, but in the end we traced our footsteps.  I was grateful for this since I knew we had a long way to go and wasn't looking forward to experimenting with other routes.

It was a tiresome climb back out of the canyon but I still had quite a bit of energy for the trek back.  I stopped to catch my breath and get one more image of the canyon and arch from the rim.


Our cross-country route back to the airstrip wasn't quite the same... perhaps a little more southerly, which was probably for the better.  Oh, I also saw some cacti in bloom, so here are my "pretty flower pictures" of the day... 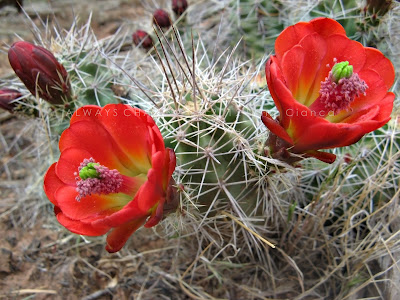 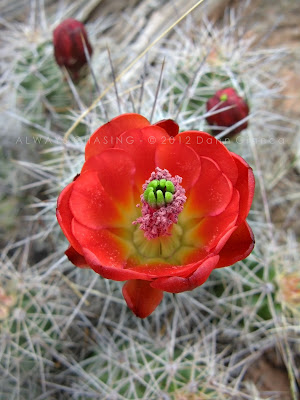 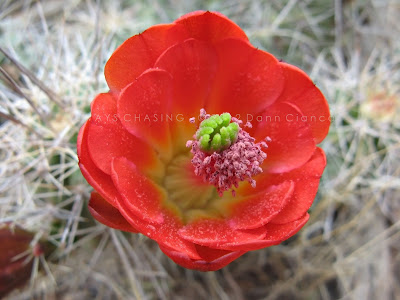 As we approached the airstrip, I realized one of my water bottles was missing.  I had finished its contents while we sat there, so I figured I had left it there but I could never find it.  I think it must have fallen out while we climbed back out of the canyon.

Back on the road now, I continued on with Stan while John and Elke led the way out of sight.  I was beginning to tire and Stan nursed a sore hamstring.

The last seven miles of that road seemed to stretch on forever as I steadily worked through my water supply.  Aside from the two ascents in the canyon, my lungs were never really tested but my legs and especially feet grew fatigued.  Still, our spirits remained high with the accomplishment of seeing such a dramatic natural feature.


My feet became quite heavy and I ran out of water nearing the end.  We hadn't seen John or Elke in two hours or so but did see their footprints in the sand.  We almost stepped on a Great Basin Gopher Snake which was lying across the path.  It escaped before I could snap a picture.

The last two miles were grueling.  On any other day, they would have been an easy trot, but with more than fifteen miles on my feet, I was exhausted.  The lack of water wasn't helping matters either.  I carried roughly 3.5 liters with me and managed to go through it quickly despite being hydrated at the start.

Eventually, we reached the car and Stan was kind enough to share some ice-cold seltzer water with me which tasted amazing.  We arrived roughly 20-30 minutes after John & Elke and around 9 hours after embarking.

Here are a couple of maps: 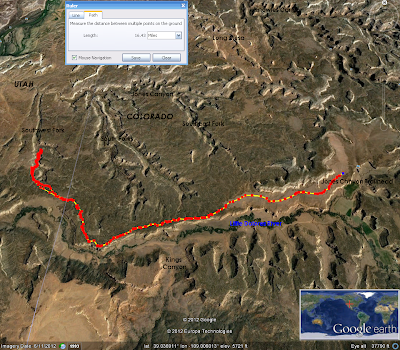 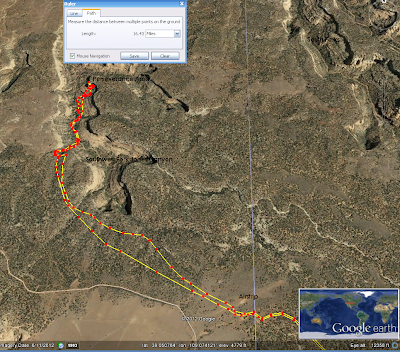 I believe Stan measured 17.3 miles via GPS, though my crude Google Earth measurements show less.  I'll defer to his length.

This is still one of the most satisfying and accomplishing hikes I have ever been on!