Earlier this week, the GFS was resolving what would be a monster Nor'Easter for the East Coast early next week. Since then, it has progressively put cyclogenesis further off the coast, and not having the storm impact the east as much as once was thought.

Meanwhile, whispers are abound of a possibly chaseable southern plains severe event next week ... I'm definitely keeping my eyes on that one. 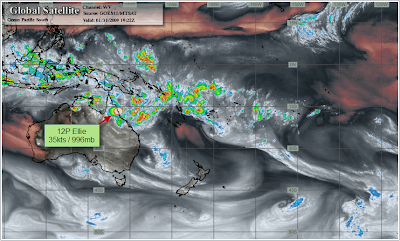 12P Ellie - This storm has been watched for the past few days, hanging off the coast of Australia. It has had impressive surface circulation and for whatever reason, as it is now impacting the coast, it has been quickly upgraded to a Category 1 Cyclone. (equivalent to a tropical storm at 35kts) JTWC hasn't been warning on this storm just yet (as I write this), but Australia's Bureau of Meteorology has, with the warning located here. (Forecast graphic below)

I've also included a sweep of the Cairns WF 100 C Band Radar and annotated the approximate position of Ellie's center of circulation. 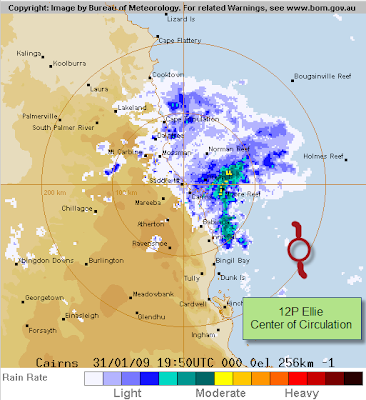 And in the Southern Indian Ocean, we have a nice area of investigation. There is no official "formation alert" on this storm yet, but it sure "looks" good. You can see the impressive ball of convection and the circulation of the lower clouds. 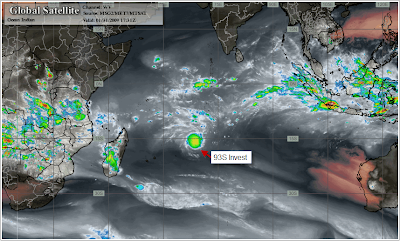 Overview tropical satellite imagery used with permission; courtesy of IPS Meteostar Inc. Tropical tracking information and radar imagery provided by the Australian Bureau of Meteorology. Annotations are made by the author of this blog. Click for larger images.
**NOTE: If you've reached this page due to a search result, the most current tropical information can be found in the latest post and not necessarily the post you are reading. Visit http://blog.bigskyconvection.com/ for the most recent post.
Posted by Dann Cianca at 1:28 PM

A severe weather event this early in the season sound great. Will you be heading out for any chasing if things fire up?

Well, given my financial situation at the moment, I might be waiting for higher probability events closer to home. I'd love to go, though. :)