With the "death ridge" still in place over the west, the Gulf of Mexico has been closed off for the last week or so. Fortunately for most, unfortunately for some, that means no severe weather in the south. The weather has been far from boring, however, with the very cold air that moved through the Midwest earlier this week. The temperature dropped down to -48ºF in Babbit, MN on the 14th. That would equal the coldest temperature that I have experience since I have been alive and two degrees colder than any temperature I have experienced outdoors.

This pattern looks like it might start to break down midweek next week. The GFS has been pretty consistent in bringing a trough into the west Wednesday or Thursday. While later runs have kept this immediate area increasingly dry, it might make for a nice change in pace anyway.

In the tropics, there are no active storms, but an area north and east of Madagascar begs watching. 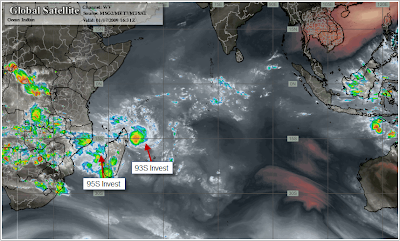 Satellite imagery used with permission; courtesy of IPS Meteostar Inc. Click for larger images. Annotations are made by the author of this blog.

UPDATE:
As I expected, 93S Invest is expected to organize into a tropical cyclone (if named, will likely be Eric)

You're a ridge of death....lol

I got yo'ridge of death right here, buddy. You bet'a bring it! :)