Gatherings, A Snowy Surprise, and Flooding in Fiji

It's been pretty quiet here for the last week except for one event, but I'll get to that later. I'm honestly a little sad that I was unable to attend the American Meteorological Society National Conference this week in Phoenix. I have gone the last two years in a row and while both trips were very different from each other, each were amazing. On par with the National Storm Chaser Convention, to me it is a meeting of the minds; a large gathering of peers. I know that fun was had by all and I'm sure there were some great presentations.

Speaking of the National Storm Chaser Convention, it is here in Denver over President's Day weekend (February 14th-16th). I will be attending for my fourth year in a row, even more convenient now that I only live about three miles away from the hotel/convention center. I have become much more social the storm chasing populace in general in the last year thanks to Storm Track, SpotterChat, and social networking sites. I look forward to meeting some of the amazing people that I've met digitally. The agenda for this year's convention is posted here. This, however, will be the first year that I will pay full price for the convention. In years previous, I had negotiated a deal with the organizers to allow students of the Metro State AMS club (S.C.A.M.S.) get in for half price. The registration fee isn't too bad, so I'll be able to make it without a problem. It is only a month away now and I'm getting very excited. Having the convention in my sights proves that the season is just around the corner. It has been too long since I have been out under one ... too long.

Now, onto the weather. We've been in the ridge-West, trough-East pattern for as long as I can remember. I'm ready for some change! Right now, very cold air is creeping along the northern Great Plains. Right now, it's -38ºF in Estevan, Saskatchewan. There is a -35ºF reading in Fosston, Minnesota as well. Now, if the GFS hold true, next week there will be a change coming. Now don't get me wrong, I'm looking foward to the next five days of downsloping 50's and 60's here in Denver, but the ridge seems to break down in the long term, a trough crashing into the West Coast. Bring it!

Like I said, it has been fairly quiet here. We've pretty much endured a swinging pendulum of warm downslope days and cold, post-clipper-frontal days. We're experience the latter as I type. On Monday, though, there was a bit of a surprise. I remember reading the forecast discussions on Saturday and Sunday. The weather was expected, but to paraphrase, "like last time, we don't believe we'll see much if any precipitation from this event."

I woke up Monday morning to four and a half inches of snow. Surprise! Here is a snow map from the day: 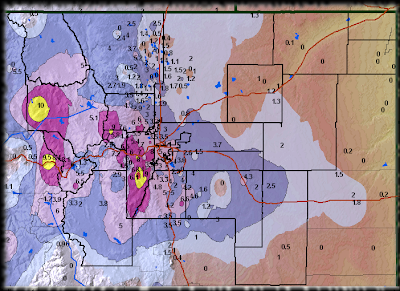 We get one of those every once in a while here in Denver ... the surprise snow storms. I recall last year getting ready to see a Chicago Blackhawks / Colorado Avalanche game when all of the sudden, a crazy, unexpected, unforecast snow storm erupted. We must have received 4-5 inches in an hour or two. I took the following picture from my then girlfriend's apartment downtown. (January 30th, 2008)


Finally, we'll take a look at the tropics. It is very quiet right now save for one small area of interest. The seemingly innocuous 90P Invest has actually caused a great deal of flooding in Fiji. News story here: CLICK 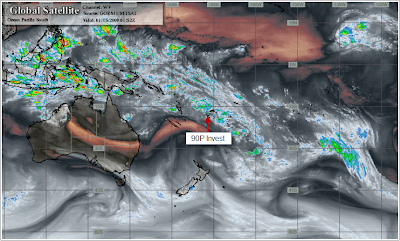