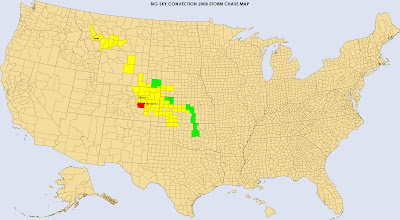 Updated 2008 Chase Map
Key: Yellow counties are counties chased in. Green are new to 2008. Red are counties where a tornado has been observed.

I.April 23rd
Location: E Colorado, NW Kansas, SW Nebraska
Mileage: 483
Chase Partners: Cameron Redwine, Cutler Gosbin, Kendall LaRoche
Description: The dryline started firing (in far-east Colorado) just before we arrived. The closest storm was tornado-warned. We circumnavigated the core to the north and got in position to the east. The east-southeasterly inflow was brutal and kicked up a lot dust, but we finally got close enough to see the beautiful meso. It lost strength at that point, so we got under the core and experienced some 1" to 1.5" hail. We followed the storm into Kansas but it died, so after a brief detour to the far southwestern corner of Nebraska, we headed home.
Beautiful mesocylone.


II.May 21st
Location: E Colorado
Mileage: 461
Chase Partners: Eric Haave
Description: First chase as a degreed meteorologist! Not much to speak of here. Nothing really exploded like we'd hoped. We ended up settling for sunset photos and hoped for some lightning at the end of the night. It was one of those classic nights where you're seeing CG after CG until you stop the car and get your equipment out.
Sunset on a not-too-stormy day.

III.May 23rd
Location: NW Kansas
Mileage: 668
Chase Partners: Francisco Alejandro Lopez-Cruz, Katie Crandall
Description: No radar, no nowcast support, and getting there late = frustrating storm chase. Tornadoes were ongoing as we arrived in Kansas. We were west of the line and the storm on I-70 right in front of us had baseballs. I knew if we dropped south, we might not catch anything, so I elected to drive north and around, dropping south toward Wakeeney. Well, we never made it. The next three hours were spent in heavy, awful rain and by the time we got to Hill City, the action was over for the day.
The first time we were not in heavy rain in about three hours, Hill City, Kansas.

IV.June 2nd
Location: NE Colorado
Mileage: 132
Chase Partner: Karissa Sanford
Description: Convection fired very late in the evening for Denver standards (latent surface heating broke a weakening cap at sunset). Storms fired all over the metro area and most were rotating! The storm of the day was out east, though; absolutely gorgeous on radar. We headed east of the city to intercept the storms coming off the foothills but decided to stay on the gorgeous cell out east. For whatever reason (and I still regret this), we stayed to the west as the almost-dry RFD put up a nice shelf cloud. I definitely felt limited by time that night and as a result didn't go further east. I wish I did. That storm was in completely open country at night. No buildings, no people, only cows. If it produced, no one would have known. ... and do to my decision-making, no one does.
Mesocyclone of small storm over the Denver-area, looking west from where we stopped to view the supercell to our northeast.

V.June 19th
Location: NE Colorado
Mileage: 64
Chase Partners: None
Description: Similar set up to the previous chase, though no beautiful supercell out east. The storms on the north side of the city quickly died, but the ones on the south, enhanced by the Palmer Divide remained strong after dark. This was definitely one of the most beautiful nights I've ever had. The coloration of the storms at sunset along with the lightning show was amazing. I had a hard time deciding which photo to include, but since I spent an awful lot of time using the church as my subject, I've picked my favorite of that set.

VI.July 2nd
Location: NE Colorado
Mileage: 225
Chase Partner: Tony Laubach
Description: Marginal day again, but went out for fun for the most part. Chased some high based linear-stormage out of Greeley east toward Fort Morgan. It was very pretty for a while. We ended up punching the line twice and then hanging around Brush to observe the flooding.
Nice burst of precip from strengthening line of storms.


VII.August 13th
Location: East Central Colorado
Mileage: 320
Chase Partner: Michael Carlson
Description: Another marginal eastern Colorado setup. Given that the day before had yielded some very photogenic supercells for Mike Umscheid, I was eager to get out. Michael and I had been wanting to chase together all year and we were both available. He kept eye on a leftover outflow boundary from the day before, so we stuck on that when we went out. Our first storm formed and we followed it through all of it's glory over the course of three hours. It was low-precipitation and unbelievably gorgeous. It almost went through the storm split process before becoming more surface-based and began to spin like a top. It wasn't until it interacted with the old boundary that we experienced tornadogenesis. The tornado (an EF-1) was not very photogenic, but it was amazing. We ended up following the storm after the tornado dissipated but the RFD came down (have great shots of the RFD hole) and wiped out the rotating updraft.
The Alta Vista tornado just before dissipation.

VIII.August 26th
Location: NE Colorado
Mileage: 375
Chase Partner: Michael Carlson
Description: The photo below should have been a clue. Yes, that is the crappy cumulus cloud on the dryline flipping us the bird. That was pretty much all that happened that day. We instead headed up to Pawnee Buttes for a more nature/landscape photo op. When we got home and I went to bed, amazing lightning was had by all (except me) in the metro area.

IX.September 21st
Location: NE Colorado, Nebraska Panhandle
Mileage: 494
Chase Partners: Jonathan Splitt, Jeff Auger
Description: Had to choose, cell coming off the Cheyenne Ridge or stronger cell (much farther away) in the panhandle. We chose the distant storm and hauled to catch it. Luckily, it right-moved in a favorable direction and we at least got to observe it before it died. On the way home, we were surrounded by beautiful constant lightning emitting storms. Easily the best lightning night of my life. I chose to include a picture of the supercell, however as even though I got 60+ lightning shots, the supe was my favorite.

X.October 21st
Location: East Central Colorado
Mileage: 452
Chase Partners: Michael Carlson, Ryan Shepard
Description: Another marginal (what else!) day for chasing. Was supposed to be the "last chase" of the year. We had a little convection along the cold front, but it was elevated and got wiped out quickly. We tried for some lightning afterward but it was too infrequent.

The cold front (elevated convection behind it).


XI.November 5th
Location: Oklahoma
Mileage: 1440
Chase Partners: Ryan Shepard, Johnathan Skinner
Description: The "real" last chase of the year and this one was a "marathon" chase ... lasting over twenty five hours. We got up early and drove out to our target (between Wichita and OKC). Storms fired ahead of the dryline after the garbage convection started to clear out. Most storms were HP and some rotated. The first intercept was a beast. Our second, much farther south, was also gorgeous. We got perfect position on it just after dark (right in the bear cage) and observed a scud funnel right under the wall. If it would have been a little lighter, I think I wouldn't have any doubts about whether it was rotating or not. I still do. It was right overhead! We drove all the way back to Denver that night.

Happy New Year Dann
You've been busy in here, just checked out all your Montana trip pics, great stuff!
Cool recap of the year, you could use that church shot for a scary movie poster, all nice pics.
Cheers to 2009!

Thanks Boomer! I had quite the trip and was very happy with some of the photos. Though, if I could have removed the power line for the shot and then reattached it, I certainly would have done that! Here's to a good 2009. I hope to chase the highline in Montana this summer, so I'll almost be in your neck of the woods!

Happy New Year, Dann. I must say I saw this blog and fell in love with your photos. You do great work, hope to learn more about weather photography in the coming years.