I had been watching this event unfold for several days. With a decent September upper level trough in the Northwest, models had been resolving a decent theta-e axis along the lee of the Rockies. Winds backed into the lee trough all the way up into the Dakotas. It looked as if cyclogenesis would happen in Montana with a warm front stretching along the North and South Dakota border. While it was tempting to head up and play the warm front, it looked like a dryline would be setting up along the lee trough into the Nebraska Panhandle. There was some decent CAPE along this axis and it looked like the tail end of a shortwave would move through the area that afternoon. It was closer to home and made a good target. Precipitation models were breaking out an isolated cell somewhere along this line quite regularly. The solution made sense to me. I convinced Tony Laubach to make the trip and he invited Ed Grubb along as well.

Just in case something happened early over the Medicine Bow or Laramie Mountains, we decided to head up I-25 toward Cheyenne before heading into Nebraska. On the way, we came across a freshly ignited grass fire which we took a few minutes to document. We watched as it burned and expanded and then as it was subsequently put out. 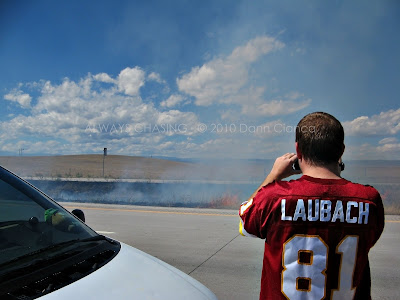 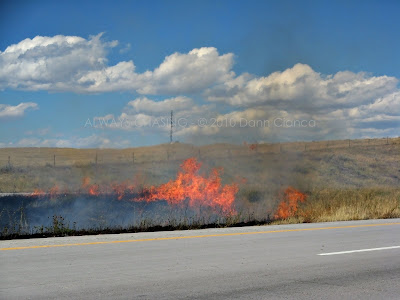 Things stayed fairly quiet in Wyoming, so we continued on into Nebraska. According to mesoanalysis, moisture was already starting to converge along the lee trough which stretched NNW from Kimball, NE toward Torrington, WY. Of course, as soon as we made the decision to drive east, a few cells developed along I-25 between Wheatland and Douglas, Wyoming. None of them seemed to be making much of an effort to strengthen and since we had initially targeted the Scottsbluff area, we headed north from Kimball and hung out in the Scottsbluff area for a while. The cells in Wyoming, while persistent, never amounted to much. We were more interested in the cu field along the dryline that stretched to our southeast. It was still capped but we also had some heating to go and a bit of upper level support coming later. So, we busied ourselves with lunch and I explored a new Menards store simply for the nice air conditioning.

Eventually, some of the cumulus began to push through the inversion. One storm began to precipitate northeast of Kimball but then quickly blew itself out. Another cell was beginning to form near Harrisburg. Around this time, Severe Thunderstorm Watch #650 was issued for areas to our north, but we were not included. Storm motions were going to be quite slow on the day, so we headed a bit east of Scottsbluff and crossed the North Platte River near Melbeta where we watched the southwestern sky. 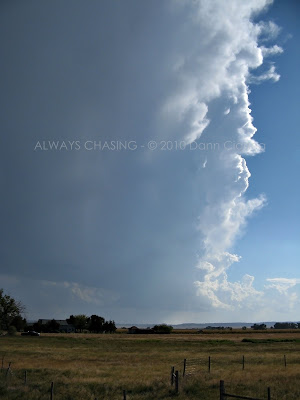 The cell near Harrisburg was pulsing a little but seemed to continue to slowly strengthen. We lost sight of the base because of precip and the Wildcat Hills, so we decided to head south out of Melbeta to get a better look. Eric Treece was south of us and was texting me updates as to the storm's status. As we emerged from the Wildcat Hills on through Wrights Gap, we were greeted with a beautiful sight. 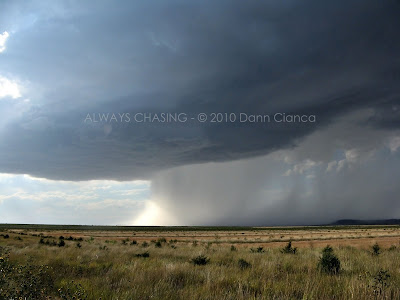 The storm already looked as if it were taking on supercellular characteristics, albeit a bit on the low-precipitation side. The base was sturdy and hard and it was beautiful in the way that it shadowed part of the sunlight as it illuminated the very definitive precipitation core. 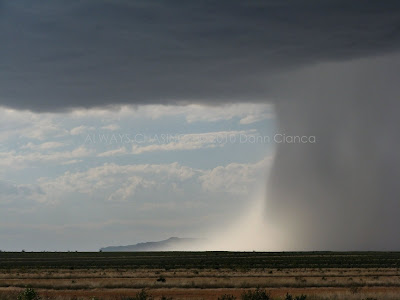 We got one last look at the storm before heading back north on the road (which was dirt) before too much of the core came over and made driving difficult. 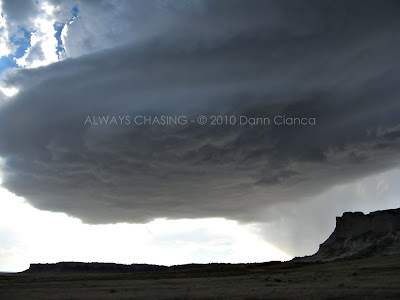 We lost visibility of the base by the time we reached pavement again but resolved to minesweep the core for hail. We eventually found some one inch stones, measured, and saw a few larger which we didn't have the chance to measure. I texted my findings to a friend at the Cheyenne NWS which verified the warning that had been put out for the storm. There was a report of golf balls near Melbeta, but we didn't see anything that big. Mesoscale Discussion #1809 was issued right about this time.

We got on NE62 and headed east to McGrew where we decided to head up to US26 and continue east. As we pressed east, the storm was moving northeast and we were starting to get out of the precipitation. I noticed a bit of an RFD cut on the back side of the meso and I was surprised at how dry it was. 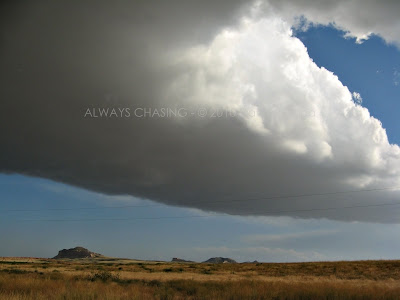 Even under the meso, we were fully lit and mostly dry. We could see a few large drops of rain or small hail brilliantly lit by the sun. It was beautiful. 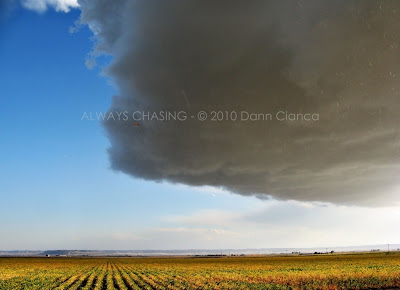 Looking south, under the meso. 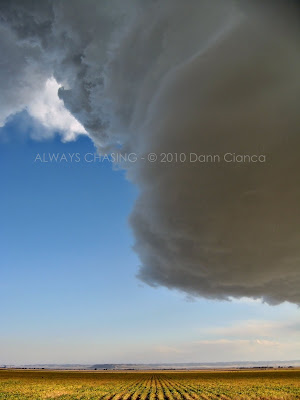 At no point did it look as if it were going to start to lower and become tornadic, so thoughts of structure were on our minds. We raced east, ahead of the storm and it became quickly apparent as I craned my neck around behind, that this was a special, beautiful storm. Sitting in the back seat, I had a better view than either Ed or Tony, and I was certainly gushing about its beauty. We reached the junction of NE L62A and US 385 and stopped at a gravel pile to watch this incredible storm as it moved toward us. It moved from our west to our north and slowly died. Occasionally, it would have a bit of an inflow tail and even more interesting were some of the very narrow precipitation downdrafts (pictured below). I took a couple trips to the top of the gravel pile for some shots and also set up my video camera for a timelapse. We saw Eric drive by around this time as well and were glad that he got to share this great storm with us. On an interesting note, a small tomatillo plant grew at the edge of the gravel lot. I love salsa made with tomatillos and was tempted to harvest some, but I left it alone.

Eventually the meso detached from the now elevated updraft as it continued off to our northeast. The light was perfect throughout this chain of events and we just sat there and enjoyed ourselves, feeling the warm inflow winds and taking in the view. I did struggle to capture the dynamic range of the environment with my point-and-shoot but chose the best results for the photos below: 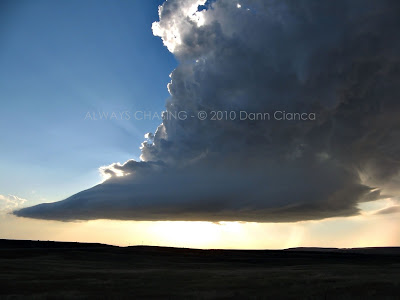 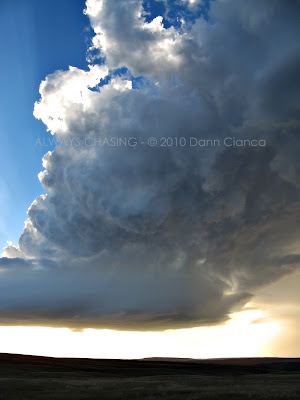 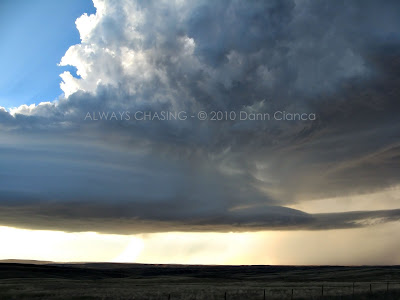 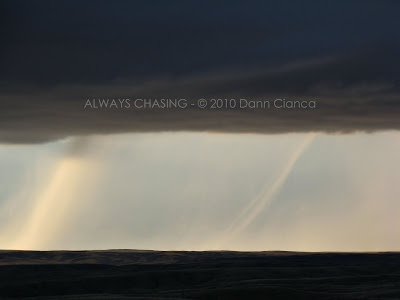 The very interesting streaks, probably hail. I swear at times, one was so tight, it looked like a long spout. 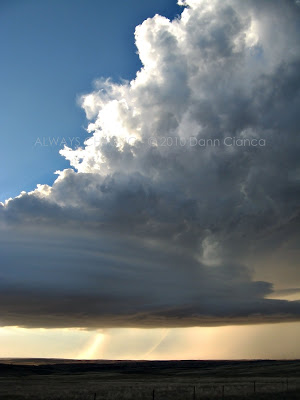 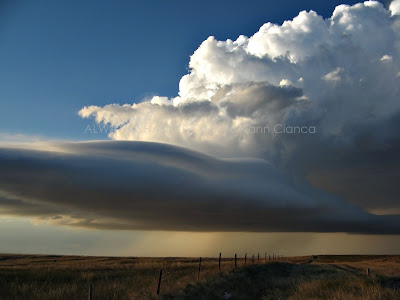 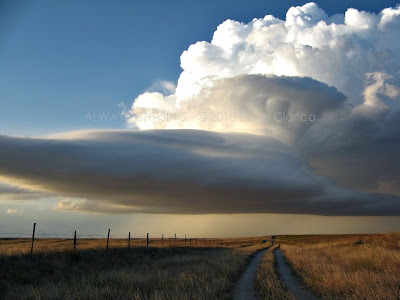 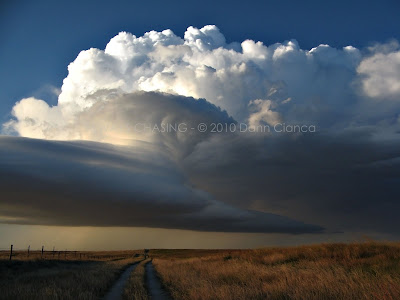 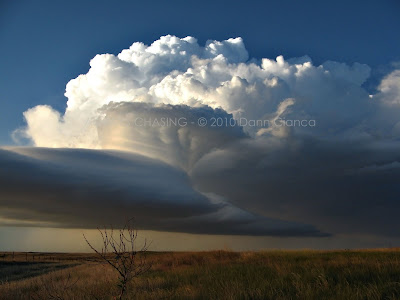 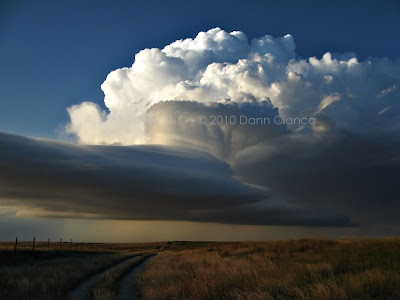 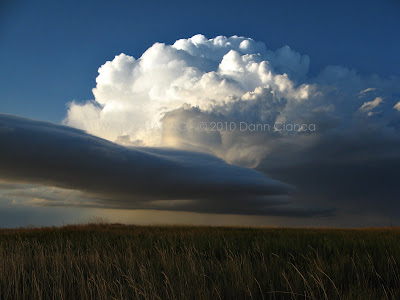 As the storm headed off to the northeast, into a much more capped environment, we left it. It was starting to get dark and we were all fairly hungry. The axis of the shortwave came through and lit a line of storms near Scottsbluff, but they were linear in nature. We didn't really want to go out our way to shoot lightning after enjoying our incredible isolated cell, so we resolved to go get some dinner and if lightning was convenient, we would take advantage.

We stopped in Sidney at the Pizza Hut and watched the opening game of the NFL season, all quite satisfied with our catch of the day. Most of the storms stayed off to the north, so we made the trip back to Denver with smiled on our faces. The storm was satisfying enough from an aesthetic standpoint, but our forecast verified as well, which was also nice. The precip models (both HRRR and 4km WRF NMM) showed an isolated cell developing on the dryline and while I only look at the precip models for storm type and distribution, they sure nailed it.

Video to be added at a later date. (though if you are friends with me on Facebook, I do have the timelapse uploaded here)

Other chasers' reports on the date:
Tony Laubach (will link when his site is not undergoing maintenance)
Eric Treece (VIDEO 1, VIDEO 2) 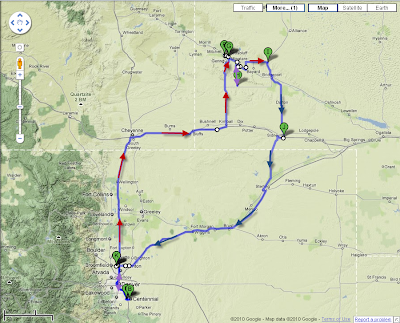 Like I said... we won't soon forget this storm. 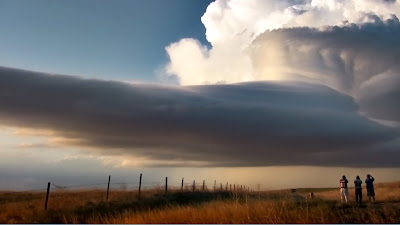