I had watched as moisture slowly increased throughout the day and knew we'd have a little upper level energy coming through again in the evening. Still, I settled down for a movie. I got a couple texts about some lightning on the north side of the city as the sun was going down, but finished my movie.

Afterward, I noticed that new storms were still popping up over the same area. I don't remember the actual synoptics of the day, but I suspect there was a bit of a jet streak over the area. I had to run to the market anyway to get a few supplies for a planned chase the next day, so I brought my camera along.

There was enough activity on the north side of the city when I got out that I figured I'd go sit up on my lightning perch and see what I could see. Luckily, a new cell popped up and started spitting out a bunch of lightning, so I rolled all the windows down on Der Schploder and cranked ... And You Will Know Us By The Trail Of Dead's "Century Of Self" on the stereo, which is an excellent record by the way, pulled out my tripod and a bag of Starbursts and enjoyed the show.

This event was not without frustration however. I ended up having some camera problems which I still haven't completely figured out, but I've troubleshot it to the point that I know if my viewscreen is turned off, the camera gets kicked out of manual focus. This has never happened before, but for whatever reason, that's what it's doing. After a few in focus shots, I got two great shots (pics 2 and 3) below that were horrifically out of focus. After the first bad one, I reset the focus to infinity and turned the screen off (to save battery power) and my very next shot (pic 3) was the same. At first, with both shots, I was so excited to get great bolts in shot, but then shortly thereafter, I found myself devastated. 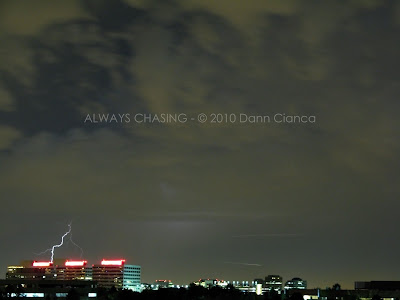 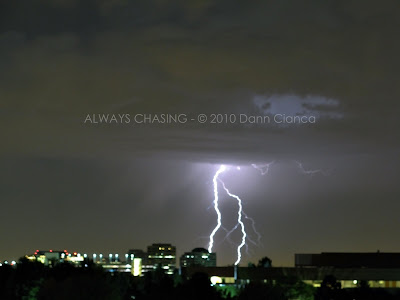 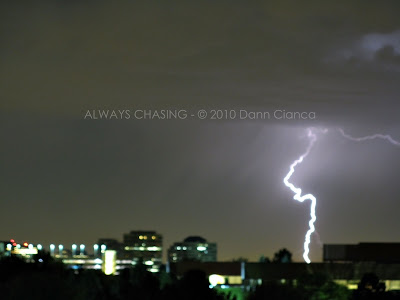 Not even sure why I bothered with the watermarks on these two... sigh.

I took about twenty more shots and ended up only capturing this: 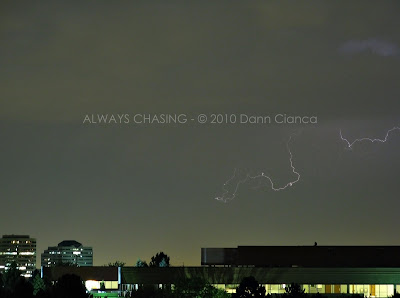 However, with the battery light blinking on my camera and fatigue and frustration setting in, I decided to pack it in... but not before one last shot... 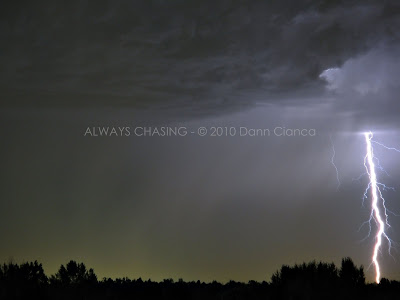 So I got to take one winner home with me. :)