Since I've only been posting "previews" of various storm chase reports and haven't been going back and completing the actual reports, this will serve as the temporary actual report for the storm chase on November 5th, 2008

When we officially decided to head out, the tornado probs were only 5% with a slight risk of severe weather. Of course, during the day, this changed to 15% hatched and a moderate risk.

So, I got up at 3:20AM and met Ryan Shepard and Johnathan Skinner at a park-and-ride and by 4AM, we set off east. We drove through fog and then light snow before even reaching Limon. Somewhere between there and Kansas, we passed out from under the cold front and watched the sun rise.

North of Wichita, we grabbed some lunch and enjoyed the 65F dewpoint. Actually, it wasn't that enjoyable. It was only like 72º and I was really hot. I don't deal with humidity that well ... though I'd do anything for a storm.

I still wanted to get south, so we continued south on the Kansas Turnpike. We ended up running into the O'Keefes, Brandon Ivey, Roger Hill, and Damon Scott Hynes just north of the Oklahoma border.

Verne alerted us to initiation, so we blew south. The storms didn't go on the dryline ... they blew up between the garbage convection from earlier in the day and a band of clouds that was moving through. In the image below, you can see the dryline firing in Kansas. The storms in Oklahoma are ahead of the dryline. Just to clear that up. 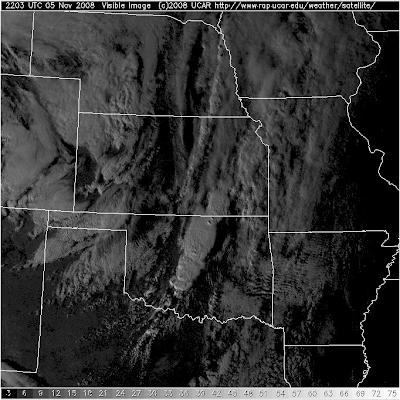 A huge cell popped up west of Oklahoma City and looked to cross I-35 near Guthrie. We had a tough time deciding whether to intercept or just get east quick on the storms already firing. We opted for the southern option and after some stair-stepping on roads (we only had Rand McNally*), we came out in front of it.

*I'm glad I brought my Rand McNally ... did so on a whim! I figured Ryan would have the GPS running, so I was glad that I thought to bring the RM. You can never be too prepared. PS: The only radar we used was on my phone as well. We did not have GR or Baron or anything like that.

I was mistaken on the location of the updraft, thinking it still to the south, but this precip bow was actually the RFD poking out. Ryan recognized that and I totally talked him out of it. Sorry buddy. As it turned out, though, it was good that we headed south. After a quick core, we were southbound to try and intercept another cell coming up from south of OKC. I didn't think we'd make it in time, but low and behold, we came out of some precip and looked west into the last light of the day ... and there was a beautiful wall cloud. (this whole part is shown in the video). We intercepted the wall cloud west of Meeker, Oklahoma ... and it had some good "hangy-downs" ... one which was very funnelesque. It will go down officially as scud, but I'm not 100% convinced.

After that, we tried to follow it, but it sort of died and everyone was getting tired ... and it was dark. Ryan relinquished driving duties to me and we stopped for some lightning:


We then stopped in Edmond, Oklahoma for some dinner. Ryan almost fell asleep in his food. There was a pretty good rain storm and some minor flooding, which we fooled around with for a bit. Then, it was the 10 hour journey home.

All in all, fantastic and completely worth it trip! 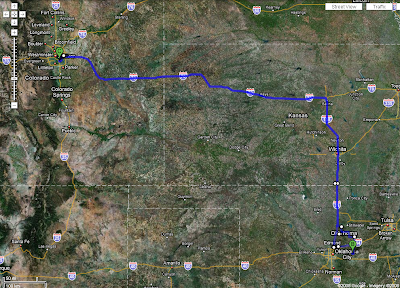 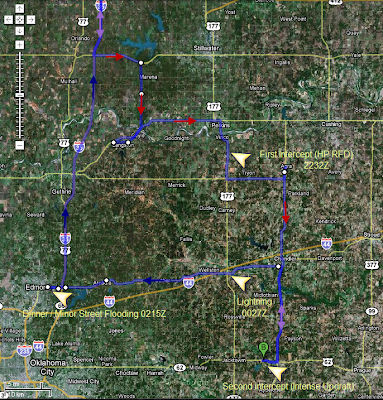 Looks like it was a fun chase thats for sure, with the core and all. Nice job. Best kind to have.

Awesome stuff. Looks like the trip was worth it!

25.5 hours!
ah to be young again..
Great pics and report, sounds like a fun trip!

Hi James, Pat, and Jay. Indeed, it was worth every penny and every moment. I still can't believe I got out in November! February is the earliest I've been out, and hell, that's right around the corner. Does the season ever end?!