The Uncompahgre Plateau is cut east to west by the Unaweep Canyon. North of the canyon is a raised area known as Piñon Mesa. From the valleys east or west, the grade is rather gradual, so it is surprising that the flat-topped and broad mesa tops out over 9,700ft. In fact, it is almost as tall as the Grand Mesa, the much more remarkable feature which lies to the east of the Grand Valley.

At about 8,700ft, the forest changes over from Piñon-Juniper to a mix of Quaking Aspen, Douglas fir (I presume) with a some oak scrub mixed in.

I had been wanting to explore the Piñon Mesa area and its various reservoirs for a while. While the valleys were baking in the mid-90s and I was looking to escape to some place cooler. I recruited my friend Shannon for a nice high-altitude adventure and we hit the road early in the morning to best avoid the heat.

The Fruita Division of the Grand Mesa National Forest can be reached via Glade Park, southwest of Grand Junction. We took S 16 1/2 Road south from the Glade Park Store as it slowly gained elevation and transitioned to gravel into the Piñon-Juniper.

At about 8,600ft, the road breaks out into broad meadows. As we approached the forest service boundary, the meadows began to take on a very bright color. It was only about 8:30AM and though there were a few high clouds, it was a gorgeous morning.  And the wildflowers, well, they were fantastic. 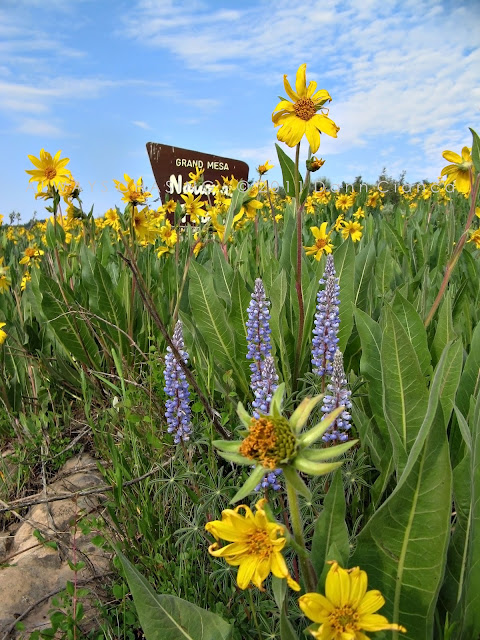 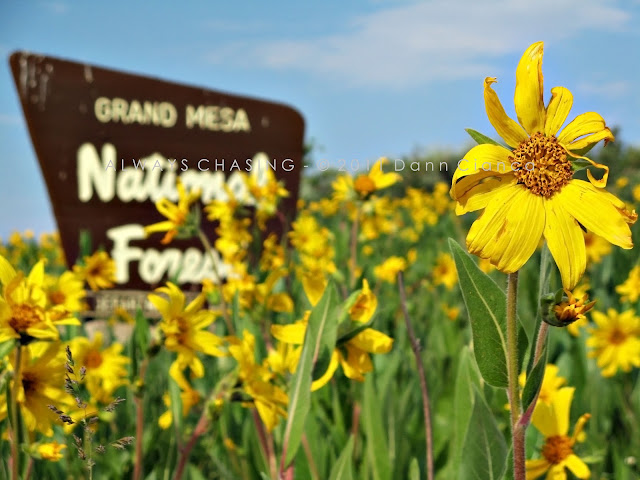 We stepped out of the vehicle for ten minutes or so to enjoy the surroundings... and avoid the bumble bees. 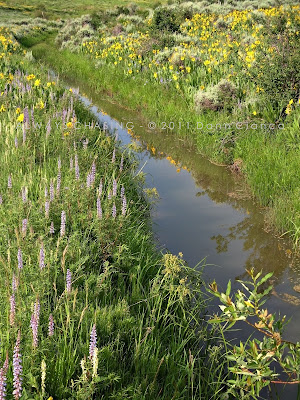 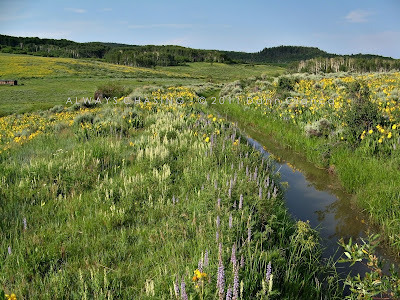 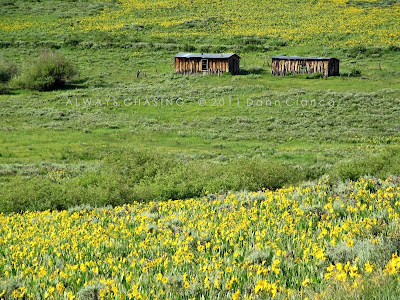 We weren't quite at the trail head, however, so we got back in the vehicle and continued on. We planned to hike from Fruita Reservoir No. 1 across the crest of the Mesa and down to Black Pine Reservoir on the other side, roughly five miles round-trip with 400ft of gain on the way to the top and 300ft on the way back up from the other side.

The trail starts pretty close to the Fruita Reservoir No. 1 (not pictured) which was a little stinky and filled with algae.  Swarms of insects also loudly hovered near the water.  From what I understand, the reservoirs were initially intended to provide water to Fruita but a pipeline that would have gone through the Colorado National Monument either was rejected or an existing one was not allowed to be repaired.

The trail continues south along the length of the west side of the reservoir.  We were briefly distracted by strange noises from the nearby forest.  Initially, I thought it might be a turkey, but I eventually discovered it was a raven.

The trail climbs west up a drainage south of the reservoir.  I got a little winded thanks to the elevation and was also on spider-web patrol, using my face to break through any rogue strands that crossed the trail.  As we neared the top, I spotted a nice columbine along the trail. 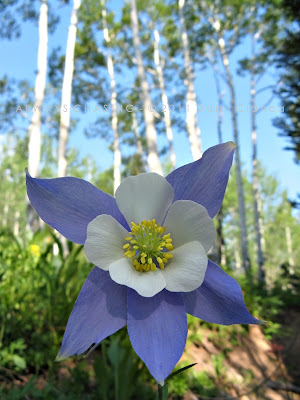 At the top of the mesa is a beautiful grove of old aspen.  We lingered for a while, enjoying the sun which filtered through the leaves. 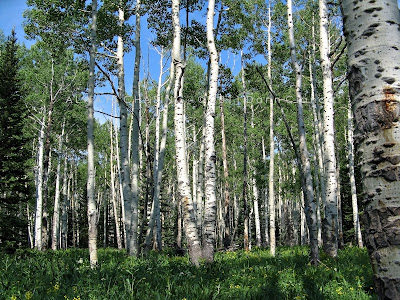 Oh, and I found a caterpillar too.  I'm not sure what it was destined to become, but I posed with it for a moment. 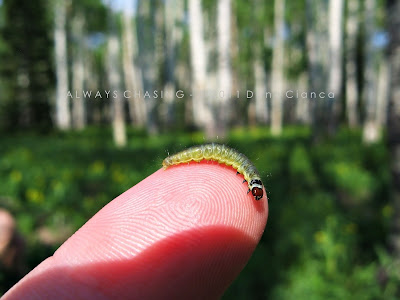 After starting to descend the other side, I noticed that the trail had become a stream and I think both of us were not necessarily looking forward to hiking down and then back up again, so after hanging out in the aspen grove for a while, we returned the mile and a half to the trail head, satisfied with what we had accomplished.

Back in the car, we stopped once more near the boundary for wildflower photos... 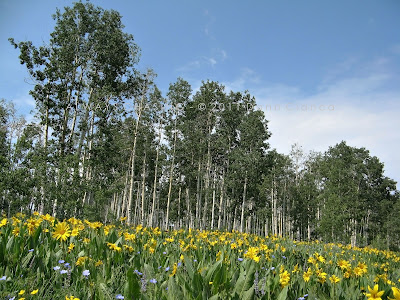 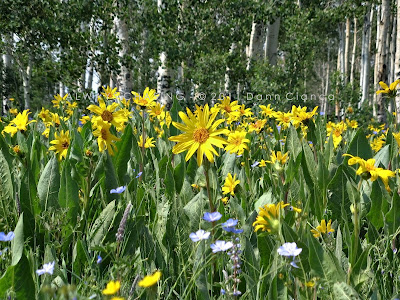 Shannon hadn't taken the entire drive through the Colorado National Monument yet, so we decided to head through and exit near Fruita.  Here are a few bonus photos of Independence Monument: 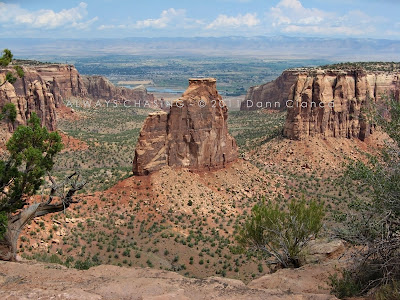 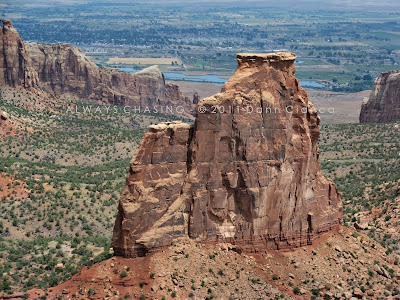 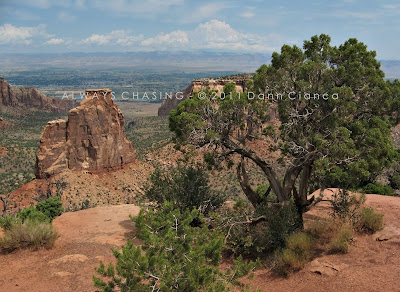 Once in Fruita, we stopped in the Hot Tomato for a pizza.  We had the Vortex Pizza.  The name sold me but it was absolutely delicious too.  Added bonus!

Though it was a rather short hike, I found it to be a fantastic way to escape the summer heat and enjoy a morning outdoors. 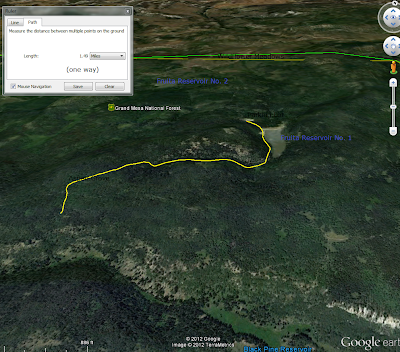