Mondays have become "Adventure Mondays," which I have to say is pretty awesome.  My friend and co-worker Shannon shares Mondays off of work as well as my spirit for adventure.   Since I was dealing with my back issues the previous week, I had to cancel.  However, after heading out just a few days before for a leisurely hike through Ladder Canyon, I realized that a longer hike was probably okay.

I was trying to think of some place that didn't have a lot of elevation gain just to take it easy on myself and realized that I wanted to visit Hunter Canyon again.  I had done so previously in October (that post has not been written yet), but thoroughly enjoyed it.  I was eager to show Shannon some of the unique features of this nearby yet remote canyon.

The canyon is carved by Little Salt Wash into the Book Cliffs, which bound the northern perimeter of the Grand Valley.  It is accessed by 21 Road, which is paved half-way across the desert.  The road actually enters the canyon, which has impressive, towering gates.

I parked at the same place that I had done previously, which is the first crossing of the wash.  Like my previous trip, there was actually water flowing in the wash.  This time, however, there was actually some snow in the shadowy areas.  Precipitation had moved through the area the day before which resulted only in rain in the city, but the Book Cliffs had a nice dusting on them.  And, as it turns out, the canyon also suffered a nice coat.

The farther we went into the canyon, the more snow we found.  Eventually, we found that walking on the frozen wash was a better idea.  In some places, the ice was rather thick.  By this time, the shadows of the canyon had kept most of the previous day's snow (and probably earlier season snow) intact.  With the snow, the going was actually easier.

In one strange moment, we actually observed a spider skittering across the snow.  That was a new one.

One of the most impressive features in Hunter Canyon is the big alcove.  It has been described as "wide enough to drive your truck through."  And in fact, many do.  At one time, I understand that the BLM did plow a road through the canyon, but flash flooding had done quite a number on it, washing it out in several places.  It is no longer considered a navigable road.

Back to the alcove, it doesn't really compare to the incredible Mee Canyon Alcove, but it's definitely the second best that I have seen. 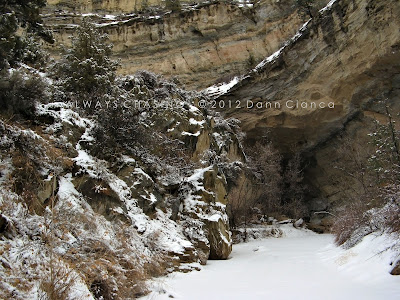 The wash was completely frozen inside the alcove, which wasn't too much of a surprise.  I pulled out my tripod to take a few longer exposures while Shannon rested and marveled. 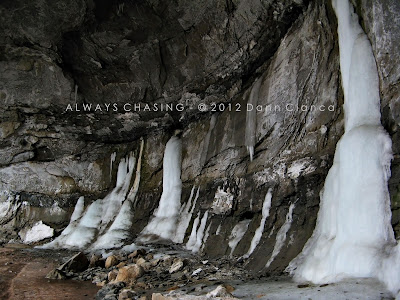 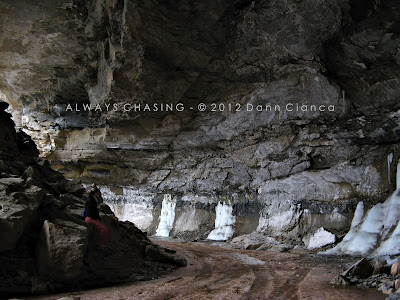 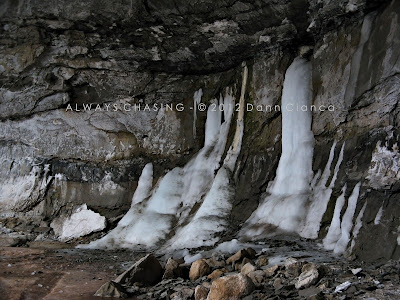 Another thing you'll notice inside the alcove is the powerful sulfur smell.  There are many coal seams exposed in the canyon and a lot of gasses escape.  It seems particularly strong in this alcove.  It's so strong, in fact, that your intuition says: "don't stay long"

On our way out, I noticed that a large, recent rockfall (not pictured) is now blocking up the entrance to the canyon.  It would now be quite difficult to take even a high-clearance vehicle all the way through.

So, we didn't.  We continued up-canyon with intentions of exploring a side-canyon which I find to be quite remarkable.  The sun started to peek out a bit too, which only made the fresh snow on the incredible terrain sparkle even more. 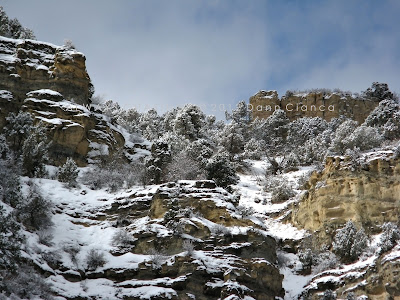 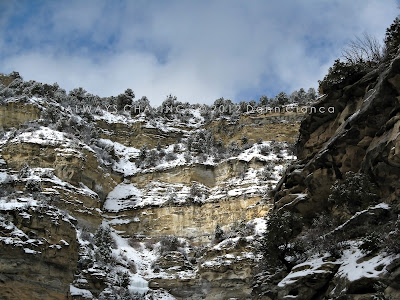 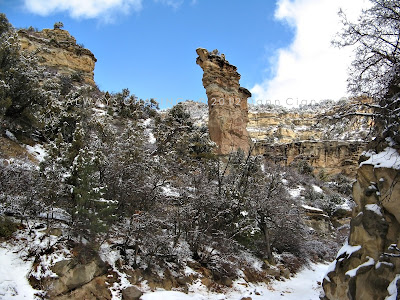 A towering hoodoo, overlooking the wash.

We also stopped for a few minutes at a place I like to call "Dann's grape-eating station."  It isn't really anything to clever, rather just a place I had stopped on my previous journey to eat a branch of grapes.  I have fond memories of those grapes.  There, I took a few more photos. 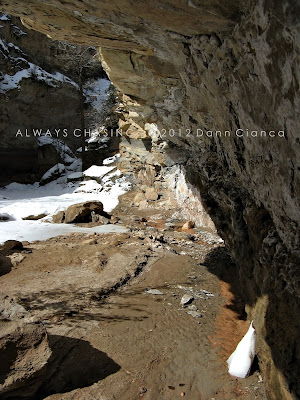 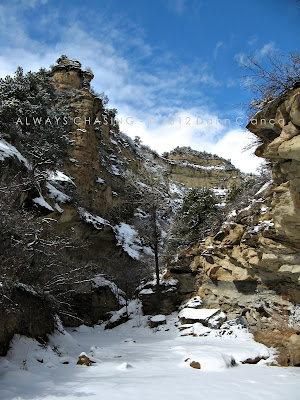 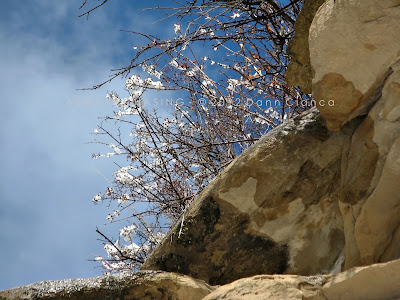 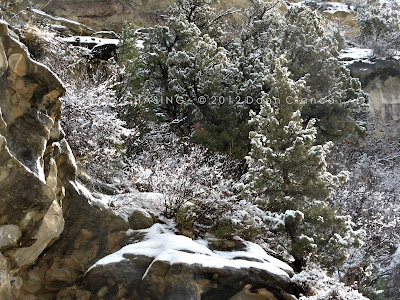 Around the next bend, the canyon forks.  We followed the smaller tributary to the east.  I had explored this canyon previously as well and found it to be awesome. 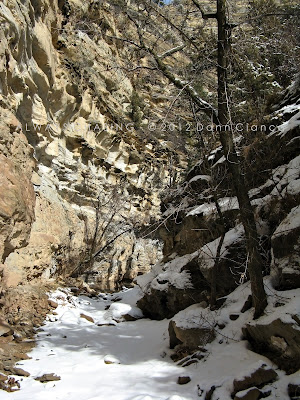 An eastern fork of Hunter Canyon.


After a short while, we came across another alcove.  This one isn't quite as deep as the big alcove in the main branch of the canyon, but is certainly as scenic. 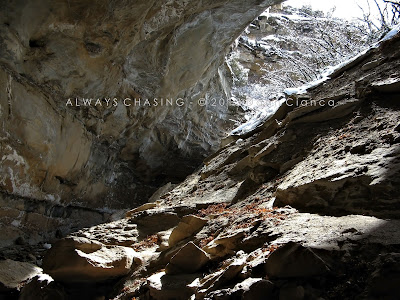 Looking upstream, into the alcove. 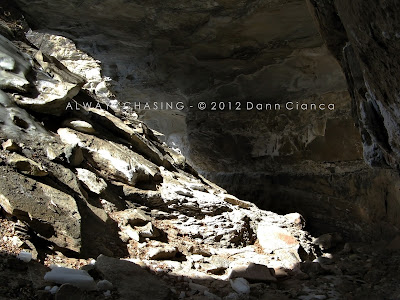 Looking downstream, from the other side. 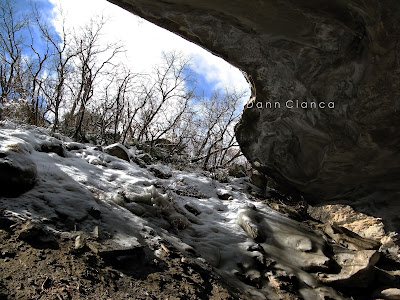 The lip of the alcove almost touches the other side.  They are literally inches apart.

After navigating the alcove and trying not to fall through the ice, we preceded through what I call the "subway" (pictures below), around a very tight corner to a small waterfall (not pictured).

Well, okay, here's a picture from back in October... 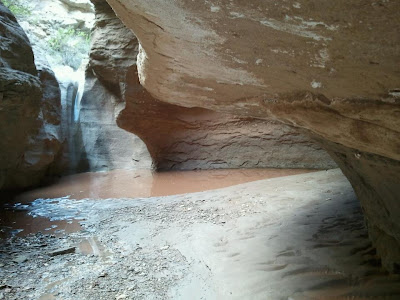 ... just picture it frozen over now.  Unlike my previous venture, we were able to walk up to it since the pool was frozen over.

While the waterfall is cool, I think the short, tight canyon leading up to it is the best part of the canyon.  Luckily, I remembered to take a few photos on the way out! 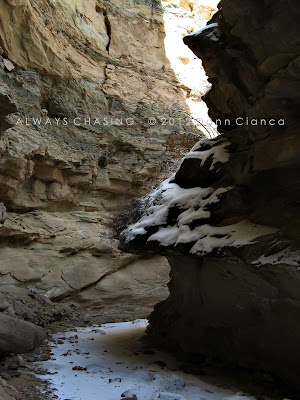 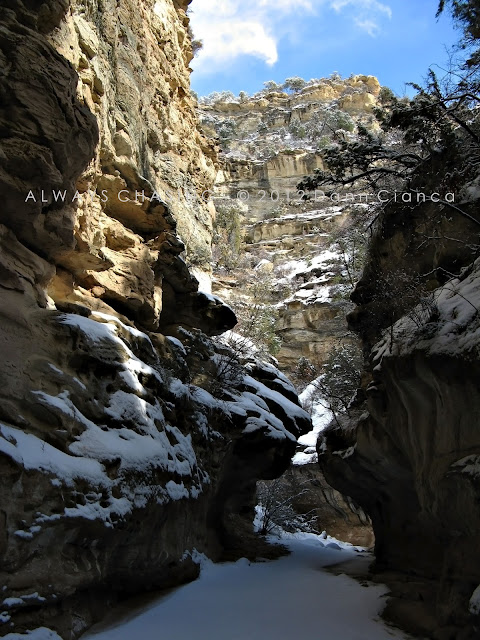 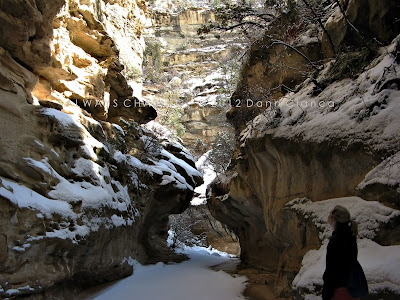 Shannon (I can only assume) marveling at the amazing scenery.

I only fell through the ice once on the way out and since my boots had already become muddy and wet earlier, it wasn't too much of a deal.

Once we returned to the main canyon, we continued exploring upstream for a while.  I wanted to at least go to the next alcove (not pictured).  That's where we turned around.  The upper alcove is actually pretty deep, but cut off from the wash.  The floor of the alcove is probably at least ten feet higher in elevation than the wash.  I'm not sure how long it has been cut off.  It is possible that when they put the road through, that changed the course of the water.

On the way out of the alcove, Shannon easily walked down a snowy slope while I resorted to using my backside as a bobsled.  +1 for me.  I'm not going to lie, it was a lot of fun.

From there, we worked our way back out of the canyon.  Since it was a bit warmer, there was more mud, which was a little annoying and a couple of places that were solid ice were now flowing water and slush.  With the warm, convection was popping along the Book Cliffs which led to occasional snow/grauple showers.  So, it was a little messy, but we made it back, pleased with our adventure.  We then capped off the adventure with some hot soup and cheddar bay biscuits from Red Lobster.  That's what I call a complete adventure. 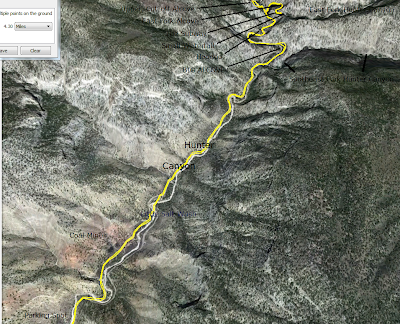 Wow
Talk about some sweet light!
Some killer shots in there.

Thanks, Pat. It certainly was gorgeous; the snow sure helped.