Normally on a Saturday morning, you can find me playing flag football, but after injuring my back the previous week, I was on my second week of sitting out and itching to get some sort of exercise. I had intended to at some point and time go on a hike with my friend Janelle, but our schedules had always been in conflict.  I realized that this would be a good opportunity and invited her along for what I planned to be an easy and short hike.

Regarding my back injury, I had felt a tightness in my lower back while playing football and eventually left the game when it really started to freeze up.  I was also feeling nerve pain in my right leg which was not good.  I significantly herniated a disc in my back in late 2007 and dealt with a lot of pain for about six months before getting a couple of spinal injections.

Since then, I haven't had much trouble save for the occasional tweak, usually when I pull/strain a muscle in my back.  This was different however, for about three days, I was incredible pain once again.  It hurt so bad, I couldn't roll over in bed.  Sitting was okay, standing was a struggle, but after a couple of days, the pain vanished, so I didn't go to the doctor.  Anyway, I am taking a couple of weeks off of playing football and basketball and keeping my hikes in less-strenuous territory.

This was going to be one of those hikes... the less-strenuous variety.  I thought of an easy hike that I wanted to accomplish in the winter anyway: revisit the waterfall past the mica mine in Ladder Canyon to see its winter state.

Another friend, Spencer, also decided to join us, so we hit the trail on a cloudy February morning.  I knew the cirro-stratus was going to make photography terrible, but I really just wanted the exercise.

Joining the three of us was Janelle's dog Dierks, who I'm sure was enjoying some time outside.

There was a surprising amount of snow in the canyon, considering that the valley hasn't seen much this year.  We made a pretty quick pace past the mine and to the waterfall, which was unimpressively frozen. 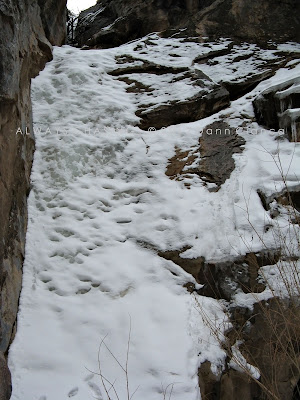 Compare the photo above to those I took during runoff here:

At least this time, I could get close to it.  During runoff, the place where I was standing to take the photo above was a deep pool.  More interesting than the waterfall, in my opinion, was a frozen seep to the right of the falls.  It had some nice icicles that we played with. 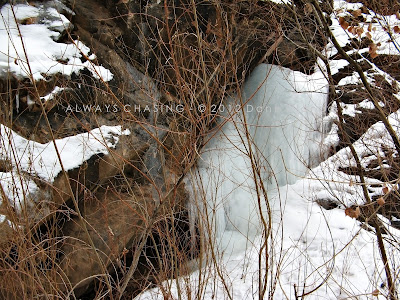 We didn't linger in the area too long, gingerly descending the lower cascade of the falls. 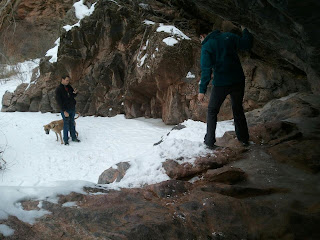 The light tried to peek out a couple of times on the way back, but didn't do very well.  At least it put some color on the rocks. 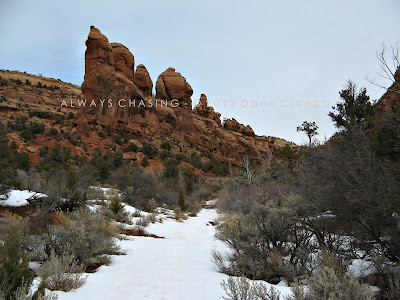 The divide between Ladder & Rough Canyons.

Finally, after the confluence of the canyons on the way back, I left the trail and followed the icy stream bed.  It provided a couple of photo ops at least.  Although, I will say that while standing in the middle of a frozen sheet of ice, I heard a lot of deep cracking, so I abandoned that position fairly rapidly. 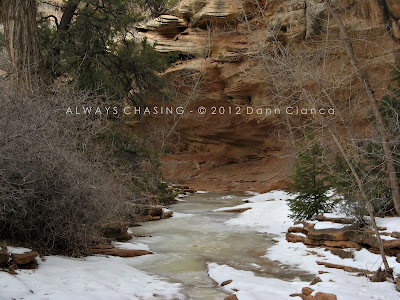 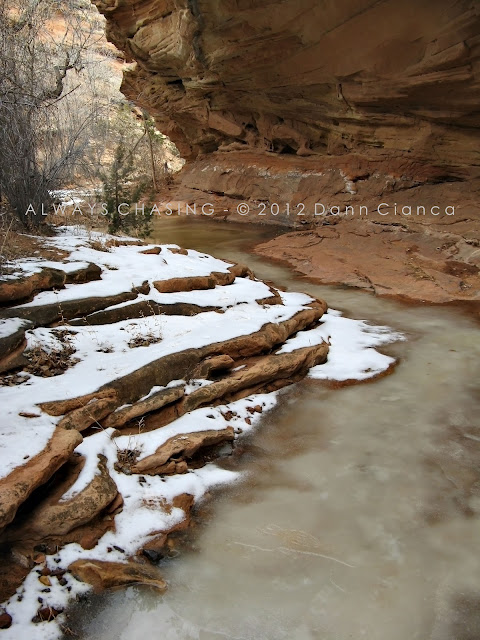 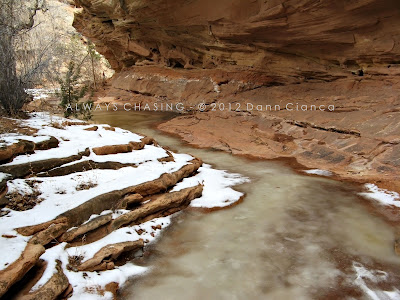 All in all, it wasn't anything strenuous (just under three miles round trip), but somewhat adventurous and fun to head out with people I haven't hiked with before.

We capped off the afternoon with lunch at Dos Hombres which was decent but a little pricey.  I'm a little cheap. 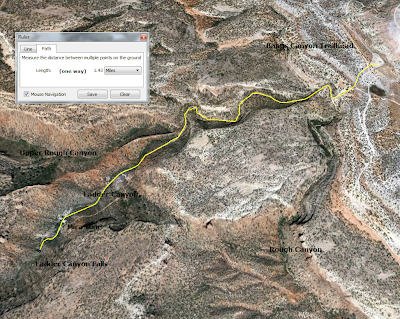